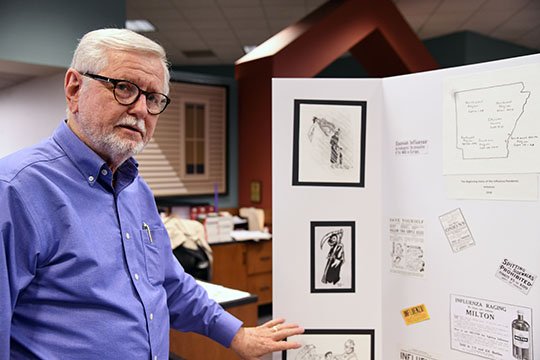 The Sentinel-Record/Grace Brown EXHIBIT: Artist and historian John Polk created an exhibit entitled "Arkansas and the Influenza Pandemic of 1918" to show the effects the pandemic had on the people of Arkansas. The exhibit is located near the nonfiction section at the Garland County Library, 1427 Malvern Ave., and will be on display for the remainder of this year.

As this year marks the centennial anniversary of the influenza pandemic of 1918, local artist and historian John S. Polk has created an exhibit showing the effects of the pandemic on the people of Arkansas almost 100 years ago.

The exhibit, entitled "Arkansas and the Influenza Pandemic of 1918," includes graphite drawings of those who were affected by the flu, including nurses, doctors, patients, soldiers and everyday citizens, and a map drawn by Polk showing the different regions of Arkansas and when they were affected.

The exhibit also includes posters that appeared during the pandemic advertising various "cures" for the flu and how to avoid spreading it to others.

"One cure on the market was said to be 'better than whiskey' in its newspaper ad," Polk said.

The exhibit also features photos of Red Cross workers and the hangar and hospital at Camp Eberts, a U.S. Army aviation training camp and airfield in Lonoke County where thousands of soldiers and flu patients were held and treated. The flu also heavily affected Camp Pike, which is now Camp Robinson, in North Little Rock. Polk said there were 52,000 men at Camp Pike in 1918 and its infirmary began admitting up to 1,000 men per day because of the flu.

The United States joined World War I in April 1917, and Polk said when the war ended in November 1918, half the deaths that occurred during the war were caused by the flu.

According to his research, Polk said by the time the pandemic ended in 1919, at least 675,000 Americans had lost their lives. It is believed the number of deaths worldwide could be as high as 50 to 100 million.

Polk said the 1918 pandemic began in Kansas in March of that year and had reached Arkansas by September. Most Arkansans lived in rural areas and were unable to obtain proper medical attention. In October, the Arkansas Board of Health was forced to place the entire state under quarantine.

It is estimated 7,000 Arkansans died during the pandemic, but Polk said the actual number is much higher, as many of the deaths were not reported. This was especially true among the African-American population, as white doctors were not allowed to treat black patients due to the prevailing segregation laws of the period.

Polk recalled, even in the 1940s in his own family doctor's office, there was a black waiting room and a white waiting room.

He said his interest in this subject was even more piqued after the unusually high number of deaths caused by the flu in Arkansas this year.

"Over 200 people have died from the flu in Arkansas this flu season, and that's the worst it's been in 20 years," he said. "Influenza is still the most dangerous epidemic we can have. We can have a pandemic at any time."

As if this year's flu season wasn't bad enough, it was reported in March that the flu is returning for a second wave, and this strain is particularly tough on young children.

"I first became interested in this because the flu pandemic had so much influence on the Americans. For example, my mother's first cousin was in France and he came home and his wife had died from the flu. He didn't know it until he got home," Polk said. "Everybody has some story. It's been a century now; I'm 75 years old and I still remember people talking about it. Most people just wanted to forget it because it was actually a plague."

"The flu affected a great many people that had a great deal of influence on Americans later on. Walt Disney had the flu; he didn't die from it, but if he would have died, we would never have had Mickey Mouse and Donald Duck. Franklin Roosevelt had the flu. Had he died, he would have never been president. There wouldn't be Social Security," Polk said. "It's interesting to think about how many people did die of the flu, and how many things we might have now because of them."

The exhibit is located near the nonfiction section at the Garland County Library, 1427 Malvern Ave., and will be on display for the remainder of this year.