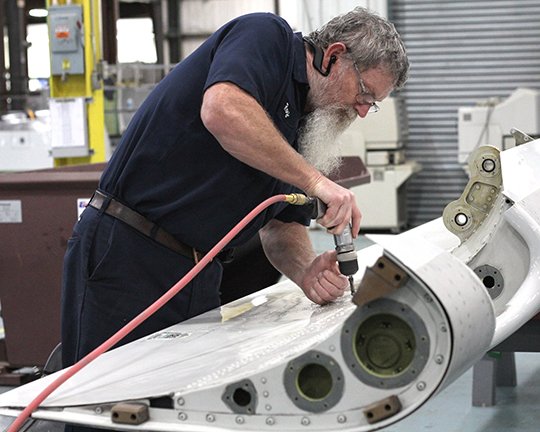 Triumph Airborne Structures, 115 Centennial Drive, plans to hire 40 new employees after it was recently awarded repair and maintenance contracts with a U.S. airline operator and for an unspecified military cargo aircraft.

A company official says it will hold a job fair from 4-7 p.m. Aug. 22 at its office to recruit mechanically skilled workers, and everyone is guaranteed an interview.

A company spokeswoman said she was not able to release customer names, saying it is proprietary information.

"We've been chasing labor here for years in terms of skilled labor," Mike Abram, executive vice president Triumph Product Support, said Thursday. "By skilled we mean people that have mechanical skills and anything that can be converted to aircraft skills. It can be automotive, farming equipment, plumbing, anything."

Abram said the company is not necessarily looking for individuals skilled in aerospace, although that would be a plus.

"I think it's really important that we define skilled," he said. "We're not looking for skilled aerospace employees. That certainly is a plus, but just mechanical aptitude. I've got to believe driving around the body shops that these guys would rather work in an air-conditioned facility. Really and truly, for your knowledge, this isn't any more than a big body shop."

"It's just become so difficult with the labor market so tight. Everybody is hiring," Ramsey said. "What we're doing right now is we're trying to find those people who are working, that want a career in aerospace. There are people that are employed that we call 'underemployed' so they have skills that they're not using."

Abram said the company essentially repairs "overall everything on the outside of an airplane" on commercial aircraft.

"We're not working on small airplanes," Abram said. "And it's parts that our customers ... ship here to be repaired. We probably have the largest market share when it comes to structures appearing overall in the world."

Alex Emme, president of Triumph Airborne Structures, said the revenue created by the company in the community is "fresh dollars."

"The economy we create here is fresh dollars," he said. "Dollars brought in here are spent here by our employees. It's not money that's been recirculated in the community because our customers are not from here."

Through a partnership with National Park College, Ramsey said new employees are able to learn aerospace skills paid for by the company. The college offers a 40-hour class and a six-month program for manufacturing and repairs of aerospace equipment.

"We utilize the 40-hour class for the folks that we hire that do not have any aerospace background; we pay for that," she said. "They're paid while they're in that training and when they graduate from that class, at least when they come here they have a little bit of aerospace knowledge. They understand some of the parts and pieces, and then they understand how to read the manual."