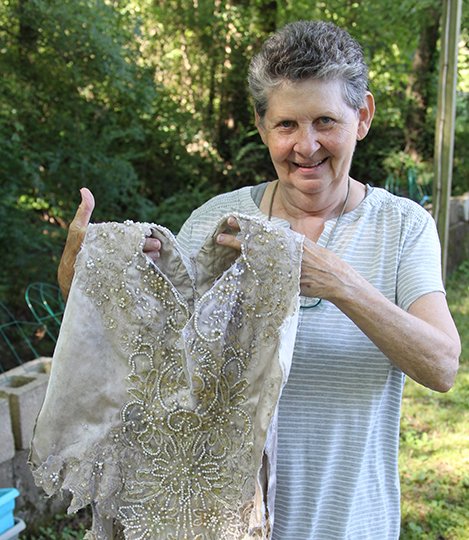 The Sentinel-Record/Richard Rasmussen WASHED UP: Linda Claiborne shows the bodice of a beaded wedding dress that washed up on the banks of Hot Springs Creek behind her home in late July.

A local woman is researching the back story of the bodice of a beaded wedding dress that mysteriously washed up on the banks of Hot Springs Creek in July.

Linda Claiborne moved to Hot Springs 20 years ago and once or twice per year for the past 17 years has been helping to keep the area clean by clearing debris out of the creek behind her home and keeping the surrounding bushes and limbs trimmed down.

One day in late July she was walking along the creek bank when a sparkle caught her eye.

"I thought, 'Maybe it's a crystal or something,' so I went over and just started wiping all the leaves and debris and dirt away and lo and behold there was the whole top part of the dress, and it's gorgeous," Claiborne said. "It was hard to tell what it was at first because there were roots growing through all of it, even through the little pearls; hairline roots."

Before beginning the cleaning process on the dress she took it to several local flea markets in hopes of learning more about its origins. After several unsuccessful attempts, she was led to the Garland County Historical Society.

"They were so receptive and so interested and asked me to take it home and try to clean it up so they could look at it better," she said.

Claiborne spent the next two weeks out on her front porch removing the roots from the dress with tweezers and cleaning it to the best of her ability with powdered soap.

She said one of the volunteers at the historical society suggested she bring the dress to The Hot Springy Dingy, a gift and costume shop located on Park Avenue.

"We were originally thinking the dress was very, very old, but Hannah (Mills) at the Springy Dingy took one look at it and she said, 'This is not that old; I think it was done in the '90s,'" Claiborne said. "It turns out that I think it is going to be right about that time, because the way that it's cut and designed, women did not show their backs in a gown and this has a peek-a-boo cut in the back."

Claiborne said there were old pins holding some of the fabric of the dress together when she found it, suggesting that it might have been undergoing alterations before being lost.

She said a close friend of hers used her past experiences to provide some insight into the age of the dress.

"An old friend of mine, she's 87, she said, 'Linda, we went to all of the country club events and all of the big parties' -- her husband was a lawyer -- 'and no one ever wore anything like this,'" Claiborne said. "Then she said, 'And my daughters were debutantes in 1974 and 1976 and not one debutante wore anything jeweled like this.'"

Claiborne said she has one more lead to follow up on in her search for the origins of the dress, a friend of hers who specializes in rocks and formations and might be able to give her some insight on how long the dress had been in the creek based on the growth of the roots found in between the fabric.

"You really have to see the dress in person to be able to feel the personality of it. When I had my hands on it and I was cleaning it and everything -- and I'm not psychic and I'm not spiritual or anything -- I did not feel any vibes or spirits or anything coming from it," she said. "It might be because I'd already washed it four times, but I did not feel any vibes that there was any kind of violence or anything around it at all.

"I've been going down there to that creek all this time and I'm at a loss at how long it's been there, that I never saw any kind of sparkle or any kind of indication that anything was there."

Claiborne said she hopes her research will eventually lead to the original owner of the dress.