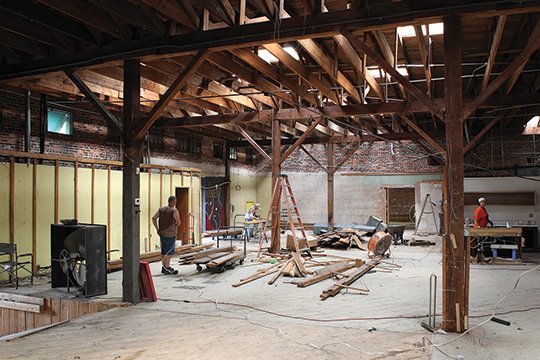 Hot Springs is widely known for its history of gangsters and gamblers in the early 1900s, but less is said about the illegal manufacture of moonshine during Prohibition from 1920 through 1933.

Prohibition didn't stop Americans from drinking -- in fact, bootlegging supported many families for years and, for some, it was their only source of income. 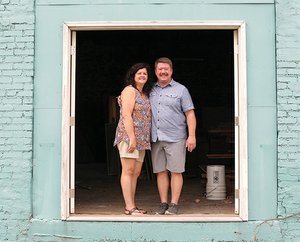 The Sentinel-Record/Richard Rasmussen NEW BUSINESS: Crystal Ridge Distillery owners Mary Bradley, left, and Danny Bradley stand in the doorway of the former Old Country Store building at 455 Broadway St. The couple have plans to open the doors of the new distillery in March 2019.

Now, almost 100 years later, Danny and Mary Bradley want to educate tourists and the people of Hot Springs on moonshine manufacturing in Garland County during the Prohibition and bring light to the people in the hills who produced it and brought it to Hot Springs almost a century ago.

In July, the Bradleys finalized their purchase of the former Old Country Store building at 455 Broadway St., and they are currently renovating the building with plans to open Crystal Ridge Distillery in March 2019.

"What we're trying to do is create a distillery that really celebrates the history of the Garland County area and the moonshining tradition that we had back during the Prohibition," Danny Bradley said. "We want something that celebrates the uniqueness of the local area and we really want to focus on the moonshiners, the people in the woods that made it and how it got here."

Danny Bradley recalled speaking to a woman whose entire family's income was supported by the illegal production of moonshine in the early 1900s.

"She told us all about how when they kind of got past that era her father took and sunk his still so that nobody could ever find it because they didn't want any trouble. There's so much fear, still, that when we talk to people they don't really talk openly," he said.

"There's still that fear that the law will come after them," Mary Bradley added.

He said the main focus of the distillery will be the manufacture of moonshine, but they will also produce other spirits, such as vodka and aged whiskeys.

When the Old Country Store building hit the market, the couple said they knew it would be perfect for what they are trying to bring to the area. The building is abundant in open space, with the lower level of the building measuring 14,400 square feet and another 1,000 feet on the upper level, something the couple said is a "must" for a distillery.

Both Danny and Mary Bradley grew up around Hot Springs and said they hope to contribute to the thriving downtown area by bringing in more tourism and creating a few more jobs with their new business.

"It really was our focus when we started looking, 'What can we do to add to Hot Springs?' The biggest thing we have going in Hot Springs is tourism. There's lots of go-kart tracks and things like that, so we wanted something unique," Danny Bradley said. "It's really something that we thought about for at least a year and a half before we put anything into action."

The distillery will feature a large event center that can seat between 300-500 people depending on the seating and table arrangements, with an outdoor seating area in the back of the building. The couple said individuals will be able to rent out the room for parties, weddings or other events. The front room will hold 150 people and serve as the bar and tasting area.

"There's a lot of space and that's another thing that we realized, other than like the convention center there's really not much space anywhere else to host something like this," Mary Bradley said.

"This building was actually here through all of the Prohibition. It's seen it all, so that was just kind of a bonus in getting this, the age of it. It literally witnessed Al Capone walk down the street," Danny Bradley said.

In addition to beverages, the couple said they will also serve food and plan to make the atmosphere inside the building a family friendly one.

"I was a schoolteacher for several years and so I want to educate the whole family on how alcohol production traveled westward and how it got to the United States and the reason why Garland County was so important, with the waters here," Danny Bradley said.

The distillery is set to be open by March 2019, just in time for spring break.