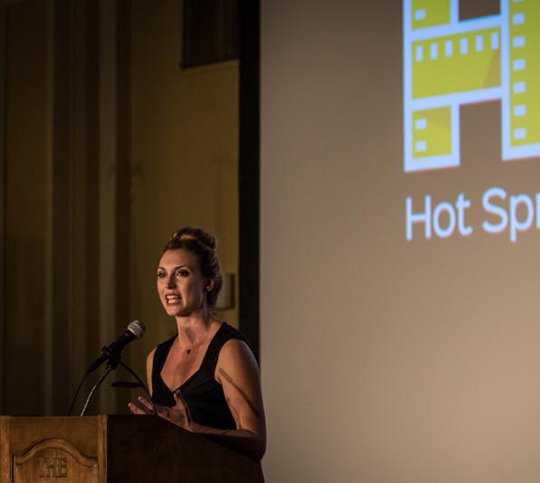 After eight months of service to the Hot Springs Documentary Film Festival as interim director, Jennifer Gerber has stepped into the role as the festival's permanent executive director.

Under Gerber's direction, the festival almost doubled its attendance in 2017 from the previous year, and planning is already underway for this year's festival, set for Oct. 19-27 at the Arlington Resort Hotel & Spa.

Gerber assumed the role as interim director in 2017 only four months before the festival, allowing her a limited amount of time for planning. Having a full year to plan for the 2018 festival, she said, has given her a huge advantage.

"That's kind of what made me want to take the job -- now I can see what I would do differently and I know what I would do the same and it's hard to let that go, once I made those discoveries. I realize now the advantage of getting to start this early, how much more I can do," she said. "Once I completed this last festival in October I was really proud of the work I was able to do in the short period of time and it made me realize the potential, that I could grow and build on what I'd already done and I sort of saw an opportunity to enhance the organization and spirit and direction that I think will help it grow even more in the next year."

Returning to the festival this year will be the Virtual Reality Lounge, an exhibit that Gerber added in 2017. The lounge allows festival guests to see a film from a 360-degree angle while wearing a headset.

She has also implemented an episodic element to the festival this year, allowing submissions to contain content in a series of chapters or episodes. The call for entries was opened just this week.

"It could be a web series or TV series, which I think will be interesting. Other festivals are doing it so this will be an interesting element to the festival," she said.

Gerber added that she is also hoping to grow HSDFF's industry reach. She recently spent 10 days scouting films at the 2018 Sundance Film Festival in Utah along with HSDFF's programming director, Derek Horne.

"What I'm learning is that our festival already has an incredible reputation and so I want to just build on that. I want to bring more industry members to our festival this year and I want, as a representative of the festival, to put myself in that place where I can represent us outside of Arkansas, like attending the Sundance Film Festival. I'm actually in L.A. right now taking meetings and building partnerships for the next couple of weeks before I come back. It's part of a new strategy of sort of reaching out more and bringing more people in," she said.

"The Sundance Film Festival is sort of the biggest festival in the country and it's the first one that happened to be in the year cycle of festivals, so it's where every big film premieres. We were there scouting films, building connections, so I think that's going to allow us to increase our programming and raise the level of our programming," Gerber added.

With more industry presence at the festival, she said she hopes to use those resources as a way to educate and empower the Arkansas film community by hosting more panels and growing the educational component of the festival.

Currently, she is hoping for the HSDFF to host its inaugural filmmaker retreat, which will be a one-day series of workshops and panels for visiting filmmakers.

"They give so much to us and we want to give back to them, so this is sort of a career development workshop," she said. "We're partnering with some other documentary associations and they're going to help us sponsor these panels, so I think we can see a little bit more filmmaker development this year. In addition, I think our programming is going to be even stronger. It's always been good and it's just going to continue to grow."