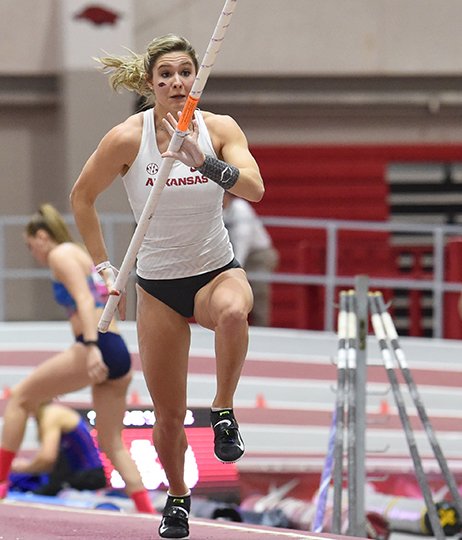 They vaulted high, but not high enough to beat Canadian Olympian and former University of Miami vaulter Alysha Newman's winning with a Canadian indoor record 15-3 1-2 achieved Saturday vaulting as a professional for Nike.

Lexi Jacobus, Lexi Weeks growing up in Cabot and as a 2016 U.S. Olympian while then a Razorbacks NCAA champion freshman, vaulted 14-9 1-2 for second Saturday while twin sister Tori, now Tori Hoggard as she also got married last summer, placed third vaulting 14-5 1-2 while Freier's 13-7 3-4 was good for seventh.

Between fatigue, they'll rest from competition until the SEC Indoor Championships Feb. 24-25 in College Station, Texas, and adjusting to new poles, they weren't up to last week's form though they sure tried going head to head vs. Newman originally scheduled to vault in Boston.

"Boston cancelled their pole vault and Alysha Newman called us up and wanted to come down here and it was pretty nice," Arkansas women's vault coach Bryan Compton said of Saturday's competition. "She's a good vaulter."

" Alysha and I, my freshman year competed against each other a lot when she was still in college at Miami," Jacobus said. "It was kind a little rivalry between the two of us, so it was nice to jump against her again. It was great competition. She did really well."

That's what it takes to keep up with the twins, Newman said.

"That's why I came down here because I know they are so good and so consistent," Newman said. "Lexi was the one who motivated me through collegiate. I loved jumping with her. And now I'm a pro and it's even more fun jumping with her."

The vaulters and Compton want the most fun coming at the SEC and NCAA Indoor Championship meets, which explains some sacrifices made Saturday.

"We got a new set of longer poles in this week, longer poles," Compton said. "This (for Lexi) was our first meet on them, jumping at the national lead. It takes some adjustment. Timing changes a little bit but if we're going to jump higher, we've got to start raising our grip.

And I think they are a little tired, especially Tori This is her fifth meet in a row."

It's been a "Cotton" picking good Tyson meet for Kenzo Cotton, the Arkansas senior All-American men's sprinter competing Friday and Saturday for the first time since feeling a hamstring twinge after running the 60-meter dash in last month's Razorback Invitational.

"Season openers in the 200 for both those guys, Roy and Kenzo, and a good start," Arkansas men's sprints coach Doug Case said.

In women's track Saturday at Tyson, Arkansas' Payton Chadwick (Payton Stumbaugh when she competed for Springdale Har-Ber), clocked 23.15 in Saturday's 200-meter just off her personal record 22.99, to win her heat and be second overall in the 200 to LSU's Kortnei Johnson, 23.14.