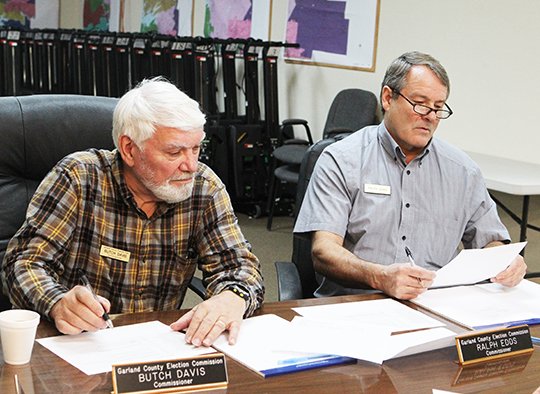 The Sentinel-Record/Richard Rasmussen GETTING READY: Garland County election commissioners Harold "Butch" Davis, left, and Ralph Edds make preparations for the May 22 elections. They were appointed to the commission by their respective county party committees in January 2017.

The Hot Springs Mall was included in a preliminary list of vote centers for the May 22 preferential primaries and nonpartisan general election.

The Garland County Election Commission released the list ahead of the filing period for the May elections opening today at noon. Candidates for county and township offices have until March 1 to file party certificates and political practice pledges with the county clerk's office. Candidates for state office have to file their paperwork with the secretary of state's office by the March 1 deadline.

Southern Airways Express LLC is occupying the area used for voting in 2016, making the airport unavailable.

"The airport was a great location because it was recognizable," said Gene Haley, election commission chairman. "We feel like the mall will be just as recognizable, if not more."

The election commission building and Faith Fellowship Church in Hot Springs Village will continue to serve as early voting and vote center locations. They will be joined by the mall and Piney Grove Methodist Church as the four locations hosting early voting and election day voting.

The 809 votes cast at Piney Grove made it the second busiest election day location in 2016, trailing only the 883 votes cast at Creekside Community Church. The vote center model the county adopted prior to the March 2016 primaries allows voters to choose their polling site on election day, irrespective of the precinct they have been assigned by the election commission.

The commission said it plans to have 24 vote centers operating on election day. According to data provided by the commission, primary voting in May 2014, the last primaries with the state's constitutional offices on the ballot, drew 13,228 voters in Garland County.

The commission said the county's seven school districts and the four with districts partially in Garland County have chosen to hold their annual school elections during the May primaries, with the slate of school board candidates and millage rates listed on the same ballots as partisan races and nonpartisan judicial races.

Early voting begins May 7, and the voter registration deadline is April 23.