It's a steal Swing and Sway all the way 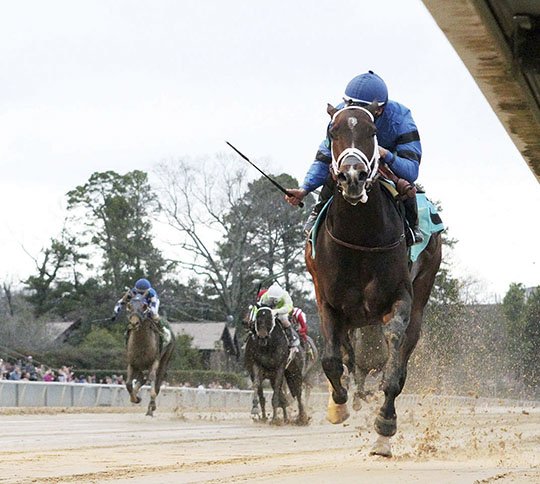 Hustled to the lead out of the gate, Swing and Sway literally stole the $125,000 American Beauty on Saturday at Oaklawn Park. After early-morning rain and with skies threatening, the daughter of Maclean's Music reversed tendencies on a sloppy track and won the meet's first filly-sprint stake by 7 3/4 lengths in frontrunning fashion.

Credit David Cabrera, riding Swing and Sway for the first time, for making the racing equivalent of a presnap adjustment.

"The jockey made a good decision," said trainer Ron Moquett. "Most of the winners today had been coming from off the pace, so I was hoping she would be no worse than third early. But after she broke so well, Cabrera let her have (the lead) and she got stronger. Sometimes, you can outguess yourself."

Cabrera picked up the mount after David Cohen rode Swing and Sway to a fourth-place finish behind Profound Moment in an Oaklawn allowance/optional claimer Jan. 12 at the same distance, six furlongs.

"I worked this filly one time and I thought this is a really nice filly," said Cabrera. "I felt like we could get along really good. ... she broke sharp, she liked it on the front end and she finished very well."

"Everything was pretty much set up the way I was hoping it would and the filly ran her race," said Cohen, who like Cabrera is in his first Oaklawn meeting. "The winner obviously ran a beautiful race today on the front end."

"The only other time she ran on the lead was in a New York-bred stake (she won last June at Finger Lakes)," said Moquett. The Arkansas-born trainer can only hope for the same good fortune as New York-bred Haveyougoneaway, the 2016 American Beauty winner for Milligan and Saratoga's Grade 1 Ballerina upsetter months later for Tom Morley.

Special K: Talking horses all her life, Kelsey Danner is now training them.

Fresh off her first career victory Jan. 13 at Turfway Park, the 31-year-old Danner saddles her first Oaklawn starter in today's third race. In a sentimental touch, it's Nan's Pierce Arrow, a 2017 Oaklawn winner for father Mark Danner, and owned by her breeder and namesake, Nancy Pierce, of Hot Springs. Pierce turns 89 March 4.

"I've known her almost my entire life," Kelsey said Saturday morning. "I think my dad probably started training for her when I was probably around 7 or 8. She's more family than a client."

Kelsey is no stranger to the racetrack. Her mother, Kelly Danner, worked in Oaklawn's media relations and horsemen's relations departments during the 1980s and 1990s. Kelsey's maternal grandfather, the late Harry Holcomb, raced horses at Oaklawn in a long career as a trainer.

Concerned about weather conditions between Hot Springs and Florence, Ky., on the second Saturday in January, Kelsey watched "on my computer here" at Oaklawn as Majestic Bold won at Turfway. Majestic Bold is owned by Darrell and Evelyn Yates, whose Crypto Star won the 1997 Arkansas Derby for trainer Wayne Catalano and with Hall of Fame jockey Pat Day aboard. After working for Catalano and other trainers, Kelsey went out on her own last June after galloping horses and working with layups on her Georgetown, Ky., farm.

"I had a couple of clients at the farm, Yates and another one, that wanted me to take their horses," Kelsey said. "That's kind of how I got started."

As for Majestic Bold, "I thought this filly would win last time and she fell on her head. My mom came to the races that day. She is ruled off from going to my races."

Kelsey has 10 horses in training -- six at Oaklawn and four at Keeneland (Lexington, Ky.)

Print Headline: It's a steal Swing and Sway all the way