Back in action: Area football teams back on practice field 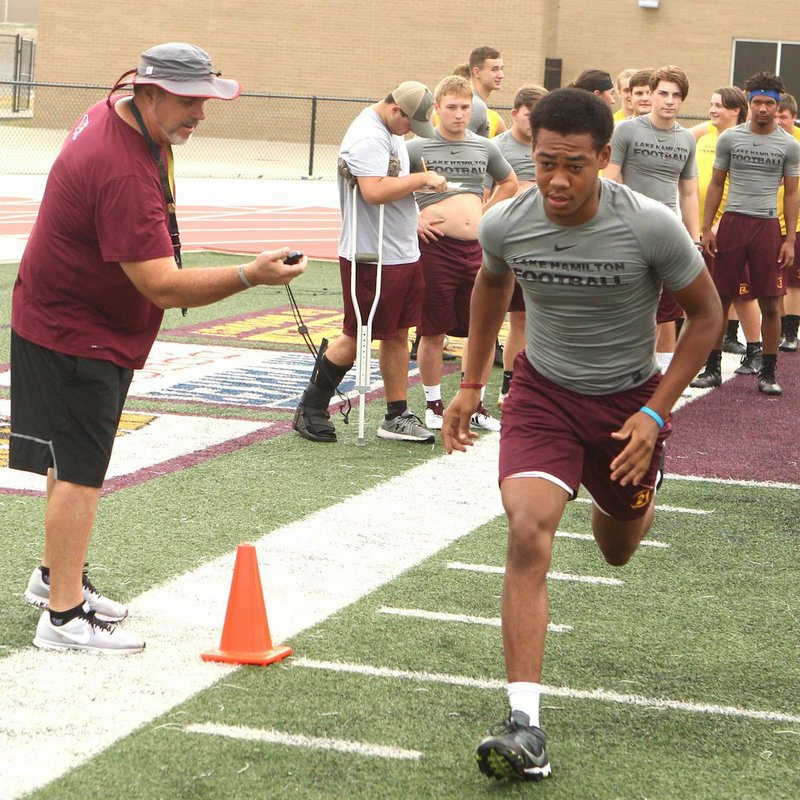 Area high school football kicked off Monday as players and coaches took to the field for their first official practice of the fall.

The Arkansas Activities Administration, the state's high school athletics ruling authority, set the week as the first for football practice. Players are not allowed to don full equipment until Saturday.

All but one Garland County school had practice Monday as Cutter Morning Star suspended its first day of practice until Wednesday. The coaching staff had additional training and other administrative duties to attend to prior to the first practice.

While weather did hamper the conditioning portions of practice, teams were still able to get in some quality work.

"We got a little rain and had a lightning delay about halfway through," said Lakeside head coach Jared McBride. "We went inside to our indoor facility and finished up. It was helmet-only, and we mostly did review. It was a good day."

"We didn't get a lot of our conditioning work in," said Mountain Pine head coach Sam Counce. "We came inside and finished, but their attitudes were good, and the kids came to work. The seniors, the ones I expected to lead, did a good job. I didn't like the amount of work we got in, but I feel good about the mentality."

Fountain Lake was one of the few teams that managed to avoid the rain and get in a full day of practice.

"We went from 7--10 (a.m.), and the Lord blessed us with beautiful weather," Cobras head coach J.D. Plumlee said, noting the thunder and lightning did not arrive in the area until around 10:15 a.m. "It was helmet-only, just like every other school in Arkansas. We flew around and got a lot of individual work in, some special teams work and conditioning. We'll do the same tomorrow."

Many coaches noted the positive mentality of the athletes.

"It was good to have them back," McBride agreed. "I could see some excitement out there. It was a good day."

Counce said his players were ready for practice after having worked through things on their own during the summer.

"We had good carryover from last year and the spring," he said. "We had good intensity and footwork; you can tell kids worked with things. They understood where we were coming from. We didn't have to start at ground zero."

Turnout for the first official day of practice was excellent as well, coaches said.

"We had almost 20 senior high kids," Counce said. "I've got one still in baseball, and one is finishing up his job; they couldn't let him go yet. We should land about 24--25 solid. Our junior high, they come in and practice with the senior high on days like this, but they mostly show up on the first day of school."

"We were all here and accounted for," Plumlee said of his 45-man roster. "We had junior and senior high out here. We had a bunch of bodies. It was good to see."

McBride said he had 70 players show up for the first official day of practice.

"I'm expecting a couple more tomorrow," he said. "We should have about 75."

Print Headline: Back in action: Area football teams back on practice field