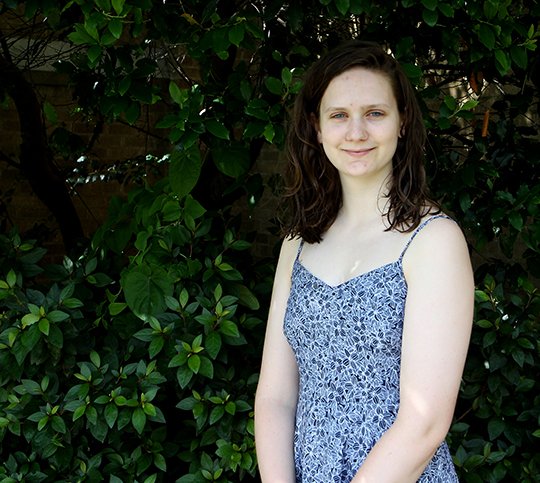 After returning from a semester at the Independent University of Moscow in the Math in Moscow program, Gentles said the experience is one not many upper-class students or mathematics majors get to have.

"Math in Moscow is basically a typical study abroad program, except for every student is a math major and the majority of the classes that are offered are math courses," she said. "They offer probably around 10 math courses and a few non-math courses so it's really good for higher-level mathematics students because a lot of times you get to your junior and senior year and you can't necessarily do these other study abroad classes because they don't offer those algebra courses and higher level courses that you need to graduate."

Gentles said she found Math in Moscow through her own search online and only a few University of Arkansas students have participated in this program in the past. She said one of the challenges she faced was the different approach Russia takes to higher education.

"Our classes were three hours long once a week with a 15-minute break in between there, and in my two math classes specifically I didn't have any deadlines," she said. "I just had a final and so I was talking to some of the Russian students and thought this is crazy, in America we have deadlines every week. They were sharing with me how it actually helps to motivate you because if you don't like a class, you actually can get it done faster, I guess. It's just a very different approach to teaching and schooling, and it was probably one of the hardest things to get used to."

Outside of schoolwork, Gentles said her group traveled to several cities around Moscow and immersed themselves in the culture.

"We did a couple trips as a group, so we went to St. Petersburg, Vladimir and Suzdal which is a bit of an older town," she said. "(We) saw Hermitage which is one of the largest art museums in Russia for sure, and definitely in the world. But also on my own I went and saw a Russian comedy show ... Moscow is just full of anything you could possibly want to do.

"One of the girls in our program, her mother is Russian so she is a part of the Russian Catholic church and she has a history with Russia, so with her I actually went to an Easter service which was really interesting. I couldn't understand anything they were saying and the services started at 11 o'clock at night and we stayed until 2 a.m., and they were still going. We left early. But that was very interesting to see how different that is. Obviously that's an exception; they don't do that every Sunday."

On May 9, Gentles said she had the opportunity to participate in the Victory Day march, a holiday that commemorates the surrender of Nazi Germany in 1945. She said the experience stood out because of the number of people gathered for the celebration.

"Everyone was so happy and it was such a huge celebration of veterans," she said. "It was like everybody in Moscow must have been there because the streets were so crowded as far as I could see forward and could see backward.

"I think a lot of times when you go abroad, or even if you haven't been abroad, you kind of forget that people in other countries are people, and you don't really get that one-on-one human experience. So the parade was kind of the first time where I really got to see these Russian people being happy and talking, really interacting naturally, I guess."

For students contemplating studying abroad, Gentles said it is definitely worth it to pursue any available opportunity even though it is a challenge.

"So this program is hard -- I came back and people said 'Oh my God, did you have this amazing time?' and I said 'Yes, but it wasn't perfect,'" she said. "I'd say if you're looking to study abroad, try to go somewhere that's going to push you. Maybe don't go to London where everyone speaks English and everyone can relate to your American culture. Try to push yourself because when you're (abroad) you can't expect everyone to be speaking English, you can't expect to read everything in the grocery store, but that's how you grow. I think that's the point of studying abroad is yes, you're going for school but you're also going to grow as a person and as a citizen. You gain insight into another culture."

For students concerned about cost, Gentles said her program was completely paid for by American Mathematical Society and the Governor's Distinguished Scholarship.