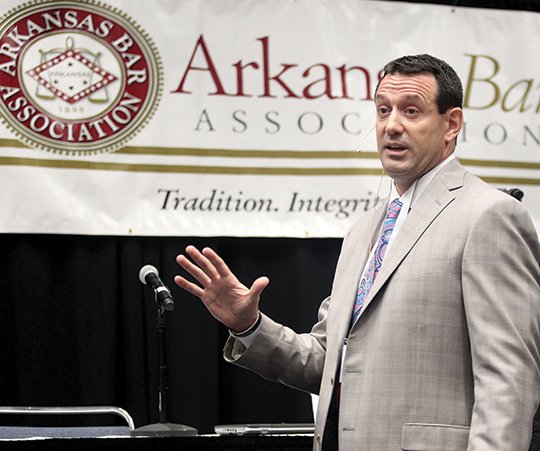 The Sentinel-Record/Richard Rasmussen PROTECTING CHILDREN: Deputy Attorney General Will Jones discusses his work with the Special Investigations/Cybercrimes Unit of the Arkansas attorney general's office and the evils of child exploitation with attorneys gathered for the Arkansas Bar Association's 120th annual meeting Wednesday at the Hot Springs Convention Center.

The exploitation of children through pornography is a "crime that doesn't end," Deputy Attorney General Will Jones of the Special Investigations/Cybercrimes Unit of the Arkansas attorney general's office said Wednesday.

"Once things get on the internet, they're not going away," Jones told attorneys gathered at the Hot Springs Convention Center for the Arkansas Bar Association's 120th annual meeting, which began Wednesday and ends today.

"Think about these things happening to a child when they're young, say 5 years old. The images of that are put on the internet. When they're 35 or 40, they're not a survivor of the abuse. It's still going on," he said.

He cited victim impact statements where victims recounted how they were grocery shopping years later and "someone is looking at them weird and they have to wonder if that person has seen their child abuse photos or videos and recognizes them. Think about having to live with that for the rest of your life."

"They have to worry about their own children being exposed to it someday, or the thought that some other child might be abused because of their video."

Jones explained the "grooming" process child rapists use, where they show potential child victims photos and videos of other children being abused and "then act it out with them. It's used as a weapon by people who want to harm children to break down their inhibitions. They say, 'Look, other kids are doing it. It's OK.'"

He said there are "jailbait forums" where abusers can get tips on how to get away with it. "They are very specific. What to do when that knock comes at the door. What to do when they come to serve a search warrant. What to say and what not to say. If people are prone to abuse children they can find access to a lot of stuff on the internet."

Jones said child sexual abusers go through multiple stages before reaching the point where they actually abduct and rape children, including "conditioning" where they consume large amounts of child pornography "getting it imprinted on their brain. They are getting to the point where the sexual acts being committed on the children bring them sexual gratification."

He said an argument he frequently hears is "they're just looking. It doesn't mean they're going to hurt a child. I'm not comfortable putting anyone into that category. Maybe they're not to that point yet, but I'm not comfortable gambling with our children's safety."

Jones said two factors abusers look at when choosing potential victims is "availability" and "vulnerability." He said "attractiveness" and "risk" are also factors, but "they're not as important and eventually get overridden by their desire."

He said parents have "a little control" over the first two factors, noting the availability of children online is something the parents can monitor and control by limiting the amount of time they spend on the internet and what times of day.

"It's important to have a good relationship with your children and open lines of communication so if a threat appears, you are the first person they come to with it," he said.

Jones said his 10-year-old daughter recently got her own phone and the first night she had it was texting "30 or 40 messages" to a friend of hers, including photos and video of her bedroom to show her what it looked like. He said he asked her, "How do you know it's her phone?" and eventually they learned it was her friend's aunt's phone she was borrowing.

"I told her, 'You don't even know who is on the other end of that, receiving your videos.' She told me to take it away from her. She was sufficiently scared, I think."

He noted that, beginning around 2014, statistics showed more people were accessing the internet via mobile devices than computers. He said teenagers spend an average of nine hours a day on their devices and 50 percent admit being addicted to it. "I suspect most adults, if they're being honest, will admit they are addicted, too," he said.

He said sexting, or exchanging racy messages and photos, between minors is a "big, big problem," noting the Legislature later changed the law regarding sexting to a misdemeanor to keep it in juvenile courts. "That tells you how bad a problem it is that they had to do that. Most prosecutors aren't even filing charges anymore. There's so much of it that it was bogging everything down. The labs wouldn't have time for other forensic analysis, it would just be full of teen's phones."

He suggested several apps and internet sites parents can use, including Google Family Link, which allows the parent to link their child's accounts to their account, get notifications, set up parameters on what they can access and keep up with their location. Another was OurPact, which has a monthly fee, but allows access across multiple devices.

"There's nothing wrong with being nosy when it comes to your children," he said.

He said parents need to be careful with the photos of their children they post, like girls in "skimpy" gymnastics or cheerleader outfits or swimsuits, noting, "There is an element of society that will get sexual pleasure from those photos."

He gave one example of a child abuser who was trading his friends' Facebook photos of their children to other abusers for child pornography. "Every time I see photos like that, I cringe. Because I know where they can end up."

Jones said the Cybercrimes unit works closely with the National Center for Missing and Exploited Children. "There's a special place in heaven for those folks," he said, who have had to review more than 236 million images and videos of child exploitation since 2002.

He stressed there is no typical offender profile. "They don't have a certain look. It can be anybody. People are often shocked to find out because they don't seem the type. There is no type."

Jones said Cybertipline.com is the best place to report suspected child exploitation activities, which can be done anonymously. He noted the information provided gets "filtered down" to whichever state and agency has jurisdiction.

"The most important thing we can do as a civilized society is make sure our children are safe," he said. "You in the legal community should be on the front lines to make sure that happens."