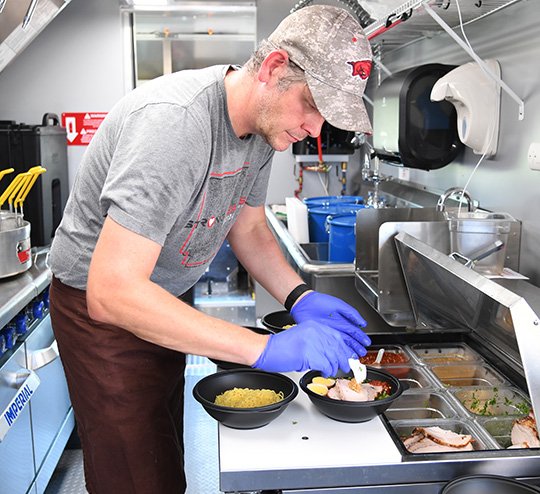 The Sentinel-Record/Grace Brown FROM THE HEART: Chef Coby Smith prepares a Japanese pork loin ramen bowl on Thursday in Arkansas Heart Hospital's food truck, Food From the Heart, which made its Hot Springs debut at the hospital's clinic located at 149 Section Line Road. The food truck will travel the state of Arkansas, hitting each of the hospital's nine locations, and will also make stops at community events throughout the year.

Arkansas Heart Hospital's food truck, Food From the Heart, made its first stop in Hot Springs on Thursday where executive chef Coby Smith served up fresh, homemade Japanese ramen bowls in the parking lot of the hospital's Hot Springs clinic.

Food From the Heart is the first hospital owned and operated food truck in Arkansas, and possibly the nation, a news release said. The truck is a venture by Arkansas Heart Hospital to integrate itself into the communities it serves and "think outside the box," said Casey Atwood, the hospital's director of culinary services.

"The heart hospital is an organization that really likes to kind of think outside the box, so I think that's where it stemmed from. The owner of the hospital, Dr. Bruce Murphy, really encourages us to think outside the box and almost be disruptive in what the norm is, so I think that's where the idea spawned from, from that culture he's created," she said.

The food truck will visit each of the hospital's nine clinics around the state and will also pop up randomly at community events throughout the year.

In addition to reaching out to the community, the food truck will be utilized to help feed affected areas during disasters.

"We've only had it for a few months, but we've gone to the Boys & Girls Club and things like that, so we use it for other reasons, too. It's not just a sales tool and to get our culinary methods out; it's also just really to get outside and be a part of the community," Atwood added.

On Thursday, Smith served a pork loin ramen bowl with cilantro, pickled mustard seeds, green onion and marinated egg, a dish he traveled all the way to Japan to learn how to create and perfect.

"Dr. Murphy really encouraged (the Japanese food) and sent executive chef Coby Smith to Japan where he went to a ton of ramen shops and really got that flavor from there, and he got back here and kind of made it his own from that," Atwood said. "The ramen is homemade, and the ingredients are very fresh. We have a garden at the hospital so we try to incorporate some things from the garden in the ramen bowls, too, so it does have a lot of freshness to it."

Smith also serves his food in the Little Rock hospital on Mondays, Wednesdays and Fridays. Atwood said providing the option of a food truck to businesses, clinics and other venues with healthy, delicious food was the next step.

Though there aren't currently any plans to expand, Atwood said the possibility of multiple food trucks in the future isn't out of the question.

"If it really does become a success, which it has been so far, you never know what the next possibility will be. The possibilities are endless, really," she said.