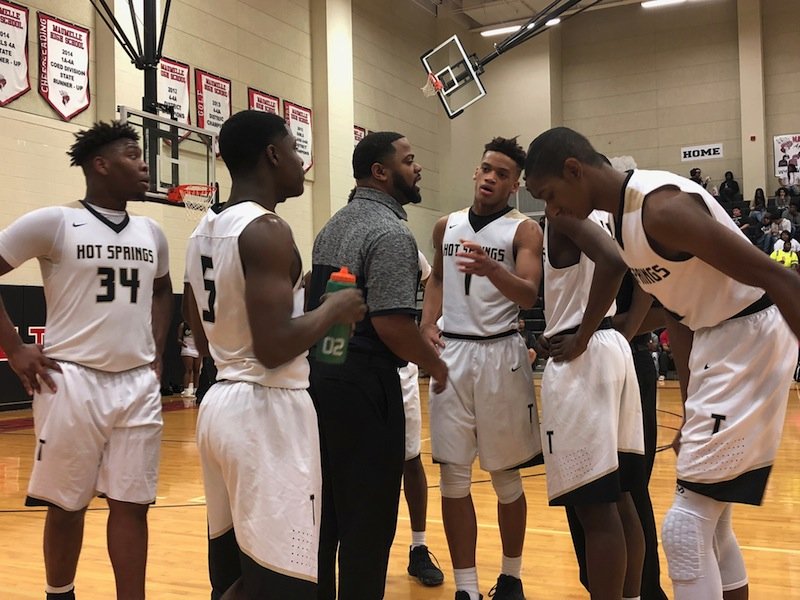 Winning 20 or more games in each of the last four seasons, coach Rodney Echols has developed Hot Springs into a basketball program built to stand the test of time.

While the rest of the state wrote the Trojans off this season following the graduation of seven seniors, including all five starters, Echols kept his expectations as high as ever.

"Each and every year, this program has a vision and that vision is to get to the top of the mountain," Echols said. "We want to win a state championship and along the way, there are goals that we have to reach."

With a roster comprised primarily of sophomores and juniors gaining their first taste of varsity experience, Hot Springs continued to stake its claim as one of the most consistent teams in Class 5A.

The Trojans finished with a record of 24-12, two games better than their record from last season, claimed their fourth 5A-South conference championship in five years and reached the Class 5A semifinals for the fourth consecutive season, leading to Echols' selection as The Sentinel-Record's All-Garland County 2018 Winter Sports Boys Coach of the Year.

"It's a compliment to this program," said Echols. "We don't have a transfer or a move-in on this team. These kids are kids that are grown in Hot Springs. They started working with me in seventh grade and stuck with it the whole way. This is what we want to do. When we have expectations, we want to reach them."

Having sent five players to the college ranks in the previous two seasons, this year represented a new era for the Trojans as sophomore Santiair Thomas and freshman J.J. Walker took over as the leaders on the court.

Playing significant minutes for the first time in their varsity careers, both players heeded advice from former Hot Springs All-State performers such as Exavian Christon and Trey Lenox.

"To replace those guys with young guys that rarely played last season or the year before last, it's amazing to watch this team grow over the course of a season," Echols said. "To be an underdog, they had phone calls with Exavian Christon about what to do next. They made contact with Trey Lenox and Paris Harris about what to do next.

"To me, that was a big component of these guys fighting through adversity, learning on the go and being able to make it as far as they got this year."

Even in the midst of a youth movement, Echols kept his team's schedule as rigorous as years past. Squaring off against top-level competition in tournaments at Fayetteville, Benton and Paris, Texas, the Trojans took their lumps over the first six weeks of the season.

After losing three games in Fayetteville, two games in Benton and three games in Paris, Hot Springs found itself battered with a 9-9 record entering the second half of the season.

"They learned how to be grinders," said Echols. "These guys had to grind through that tough schedule, and with each game they started to gain more confidence; I could see it in their faces. That turned us around and that made us better."

Playing their first home game in a month, the Trojans opened the second half of the season in style with a 76-32 rout of visiting De Queen on Jan. 2, setting the stage for a dominating run through the 5A/6A-6 blended conference.

Hot Springs won 10 of its next 12 games over the following month, earning the No. 1 seed for the 5A-South conference tournament in the process.

While Thomas, Walker and fellow underclassmen Latrell Ellis and Kaleb Hughley came into their own, their transition was aided by the presence of seniors Curtis Frierson and Payton Hayes, who helped the youngsters grow on and off the court.

"It was tremendous for these young guys," Echols said. "You have Curtis, who has been in the program since the seventh grade. He's watched the older guys reach the next level and become leaders. When you have a good group of kids that come through the program and become leaders, they pass that role to a Curtis Frierson and Payton Hayes.

"They were big brothers to those guys and showed them what it takes to be a Trojan. There's only one way to play, and we're going to play the right way."

Entering the conference tournament at Trojan Fieldhouse as the undisputed team to beat, Hot Springs had revenge on its mind.

After winning three consecutive league titles from 2014-2016, the Trojans had their crown taken by Hope in a 64-62 loss in the 2017 conference championship.

Playing in the friendly confines of Trojan Fieldhouse, Hot Springs breezed past De Queen, Camden Fairview and Magnolia in three consecutive games to regain the title and earn a No. 1 seed for the Class 5A state tournament.

"Bouncing off that loss to Hope, it put a fire under these guys and it lit a fire under me as the leader of this team," said Echols. "I brought it up a lot, and the younger guys embraced it. For these guys to go out there when no one gave them a chance, they did a lot for us this year."

Edging Greenbrier in the first round and Blytheville in the quarterfinals, the Trojans found themselves in the Class 5A semifinals for the fourth time in as many years with perennial championship contender Little Rock Parkview standing in their way of an elusive trip to the state championship.

With University of Arkansas signee Ethan Henderson leading the way, the Patriots opened the game on an 18-4 run before rolling to a 52-39 win at Maumelle High School.

Parkview went on to defeat Little Rock Mills in the Class 5A championship at Bank of the Ozarks Arena to claim their 14th title in program history, leaving Echols and the Trojans one game shy for the fourth year in a row.

"That part is what we haven't figured out yet, but we just have to stay the course," Echols said. "We have to continue to do what we've been doing, continue to grind each and every day and continue to get better. We're not happy with winning conference championships or getting to the state tournament; to us, it's the norm.

"We want to win a state championship. The program has a vision, and the goals don't stop with a conference championship or playing in the state tournament."

The Trojans don't have to look far to find their motivation for the upcoming season. After watching the Lady Trojans claim their fifth title with a 50-47 win over two-time defending state champion Watson Chapel, the returning players will enter next season with a similar goal in mind.

"As soon as the girls won theirs, the next day at school, these guys walked in and said that's the feeling they want to have before they graduate," said Echols. "It made me feel good that these guys are going to be ready to work when we come back after spring break, and prepare to make a run at it next season.

"These guys know what we expect, and they are going to do everything it takes to get there. It's just going to take a lot of will and hard work."