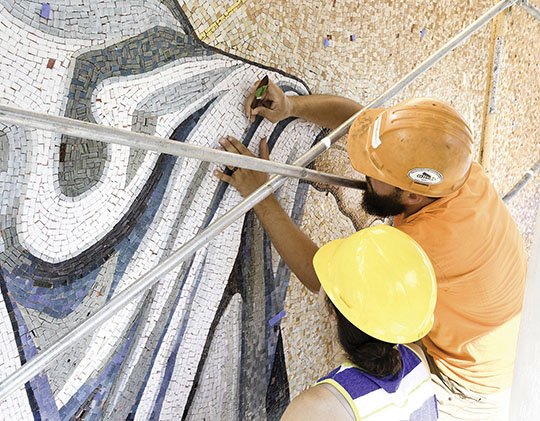 The Sentinel-Record/Grace Brown JESUS MOSAIC: Erin Holliday, left, and Vance Henson work to restore a large mosaic of Jesus Christ featured on the side of First United Methodist Church on Wednesday.

Considered by many as a gateway into downtown Hot Springs, the iconic Jesus mosaic featured on a First United Methodist Church building along Central Avenue is receiving a much-needed makeover after overlooking the area for more than 50 years.

The mosaic, measuring in at 23 feet high and 27 feet wide, faces Central Avenue from the side of FUMC's education building and depicts Jesus Christ with outstretched arms, as if welcoming visitors to the area, as it has done since its completion in 1965.

Longtime members of the church, Joyce and Neil Thornton, noticed the need for the renovation of the mosaic while looking to have the education building added to the National Register of Historic Places in 2016. Though no longer members of the church, as they have since relocated to Texarkana to be closer to their children, the Thorntons have followed the renovation project and have been a "vital part" of getting it started, said Clarence Durand, chairman of the church's board of trustees.

Overseeing the project are architect David French and Elizabeth Farris, a member of the church's board of trustees. After intensive research into several national companies, French and Farris settled on Norton Arts to complete the renovations. Norton Arts has ties to Arkansas and was also involved in the restoration of the church's sanctuary years ago, Farris said. 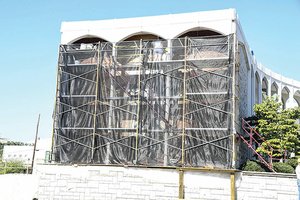 REVIVAL: Scaffolding sits in front of the large-scale mosaic of Jesus Christ on an exterior wall of First United Methodist Church as a crew works to restore it on Wed- nesday.

"The Nortons do a lot of work that a lot of other companies have never heard of doing. They are really good and I'm just fascinated that they are the ones that have come back because they did great work on the columns," Joyce Thornton said.

Renovations will include cleaning, repairing cracks in the mosaic and replacing tiles that have fallen out over the years.

The project began this year and is expected to be completed by Thanksgiving. This will be the first renovation that the mosaic has undergone since it was completed 53 years ago by a Mexico-based company.

"It definitely needs it. You add up the years between 1965 to now, it's got all the street traffic, the fumes and everything, and it was just time," said Joyce Thornton. "It should have been done every year, checked out and cleaned a little bit, and we just haven't done it."

Durand added that the lack of upkeep on the mosaic was not through negligence, but rather because the custodians were simply unaware it needed to be done.

"From far back, our mosaic looks like it's in pretty good shape," said David Mosley, the church's head pastor, "but when you get really close up to it you can see the cracks and some tiles that have fallen off, and over a period of years we recognized that if something didn't happen pretty soon, we were at risk of losing it." 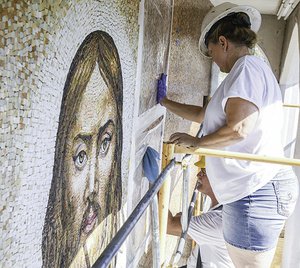 The Sentinel-Record/Grace Brown MOSAIC: Danny Freeman, left, and Imagene Freeman work to restore a large mosaic of Jesus Christ featured on the side of First United Methodist Church at 1100 Central Ave. on Wednesday.

Emergent Arts has also had a hand in the mosaic renovation, as Norton Arts recruited the help of local contractors from the business to aid in the cleaning phase of the project.

Durand said the cost of the renovations will total right at $79,000.

"The church is responsible for that, of course. We're the custodian, but we do need help, and we feel that (the mosaic) is such an iconic part of Hot Springs that we would really like to give everybody an opportunity to participate in this through a tax-deductible donation," he said.

"The Thorntons have been working on this for many years and they have raised money along the way, so we already had a fund set aside to start, but it's really just a start," Farris added.

As for the purpose that the mosaic serves to the community, Joyce Thornton said, "It is iconic to both our church and to Hot Springs. When people call at the office and want to know where the church is or want to know something about it, our secretary will say, 'Well, do you know where the mosaic Jesus is?' To me, the mosaic says that this is a community of people of faith and this establishes who we are. That's why it's there."

The mosaic renovation is just one part of an overall beautification project that will occur around the church in the upcoming years, Mosley said, adding that they plan to turn the area next to the mosaic into a "more parklike setting" by adding trees and extra landscaping.

"It's not just restoration of the mosaic; it's the beautification of this part of Hot Springs," he said. "It's the gateway to downtown."