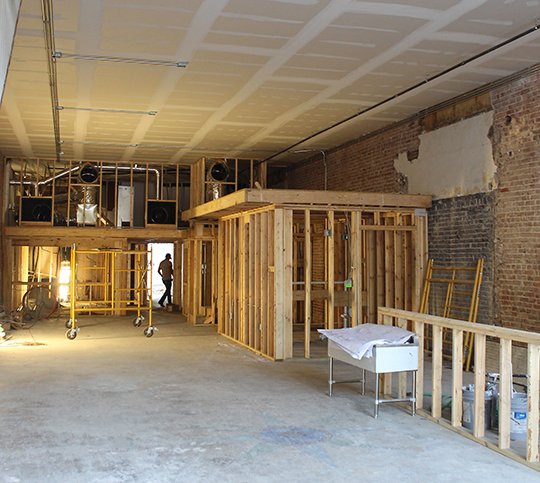 A construction workers works near the rear entrance of the future site of Delucas Pizzeria at 831 Central Avenue Friday, Septemer 14, 2018. (The Sentinel-Record/Richard Rasmussen)

DeLuca's Pizzeria in uptown Hot Springs is preparing for a big move to a more central location next month.

News of the location change comes just over a year and a half after DeLuca's was named the best pizza in Arkansas by First We Feast, a popular food blog and online magazine.

Prior to opening the restaurant in 2013, owner and chef Anthony Valinoti spent his entire adult life working on Wall Street in New York. He told The Sentinel-Record in 2017 that the career change came about after the passing of both his parents, when he suddenly became uninterested in the work. He got the "crazy idea" in his head that he wanted to begin making pizza, and there began his journey to perfecting the pizza pie.

Valinoti eventually landed in Hot Springs and opened the doors of the pizzeria on Park Avenue on Nov. 22, 2013.

"It's been five years, and I certainly never wanted to leave Park Avenue, I just absolutely love what we've created over there. It's just that, unfortunately, the building just didn't keep up with us in a lot of ways," he said.

Construction is now underway at the new location, a location that Valinoti said "makes more sense for people that come a long, long way" to eat his pizza.

"A good friend of mine, David, had purchased a building, had purchased Core, and he also purchased the building next door to it, and he actually would have given me Core had he known I wanted to move -- I really had no intention of ever moving, but, after probably the fifth time that the air conditioner broke (in the Park Avenue location) this summer, I thought that maybe it was a good idea that I look for something else," he said.

"Long story short, he bought the building next door to Core, and approached me about moving DeLuca's and I said, 'You know what, if you're going to do it with me, then yes, I can do it.'

"We get people from all over the country that come to us -- it's interesting how it grew and how it became what it became -- and I just felt like people probably deserved a better facility. There's more parking and just a little bit easier access."

Though he plans to keep things at DeLuca's basically the same, Valinoti said a small bar will be added inside the new location and the restaurant will most likely extend its evening hours on Friday and Saturday nights. After the first of the year he hopes to open the restaurant early for lunch on Thursdays through Sundays and may even open on Mondays during the summer next year.

There may also be a couple of additions to the famous DeLuca's menu, Valinoti said.

"I don't move very quickly when it comes to moving things onto my menu, so it has to be really, really good before I do, but we have a couple of ideas that we're looking at that we couldn't really execute in the last building and that I think we might have a chance to do in the new location," he added.