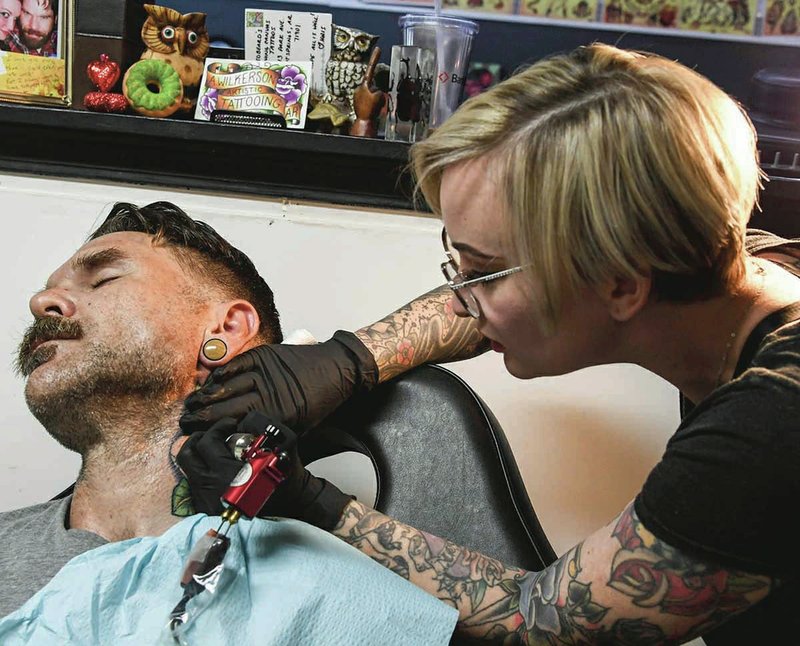 For Ashley Wilkerson, there was only one career to put her artistic inclination to use: becoming Hot Springs' only female tattoo artist.

"I've drawn basically my entire life. I was always drawing or making something. Always," Wilkerson says.

As a tattoo artist at Redbeard's Living Canvas Tattoos and Piercings for over 10 years, Wilkerson has given thousands of tattoos to thousands of people.

Her storied career adorning human canvases began one night over a decade ago in a tattoo parlor in Little Rock. After having previously worked a desk job at a parlor for three years, all the while aspiring to be a tattoo artist, Wilkerson met renowned tattoo artist and host of the television show "Ink Master" Oliver Peck, who was friends with the shop owner. Since her boyfriend at the time was an artist at the shop, Wilkerson had the opportunity to meet Peck. 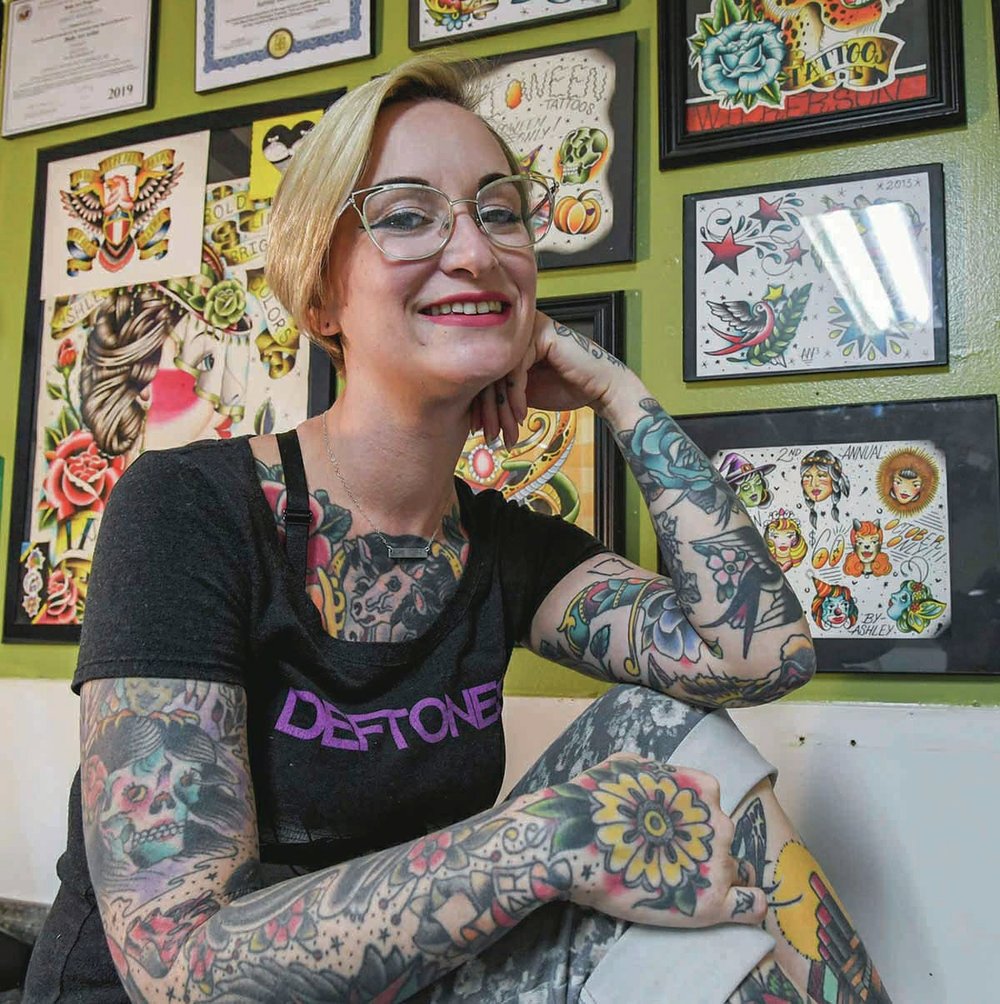 During their encounter, Peck asked her why she was spending time in a tattoo parlor if she was not tattooing or trying to learn how. When the owner overheard Peck's question, he instructed her to bring him a portfolio of her work so he could see if she had what it would take to be an artist.

Initially, Wilkerson thought he was joking. But after being reassured by the owner that he was serious and showing him samples of her work, she was brought on as an apprentice. Following her six-month apprenticeship and passing her Health Department assessment, she was officially a tattoo artist.

As she has gained experience, she has found her niche. Wilkerson specializes in traditional, or "old school" style tattoos. Made famous by artists such as Sailor Jerry and Ed Hardy, these tattoos often feature nautical and military themes inked in bright colors with bold black lines. To be considered truly traditional, all colors within the tattoo must be mixed from red, yellow and black ink. The style reached the peak of its popularity in the 1950s and 1960s and was most common among military personnel.

"I gravitated toward that style because I know what it's going to look like in 80 years. You see all these old military men that have these tattoos on them. To me, I feel like longevity is the most important thing in tattooing," Wilkerson said.

While she considers her designs and style timeless and classic, she warned against the tempting, trendy lure of Pinterest.

She credits this surge of Pin-spired tattoos with tattooing itself becoming more mainstream.

"I feel like once tattooing got on television, it got way more mainstream. I feel like people started accepting it more as a thing to do." 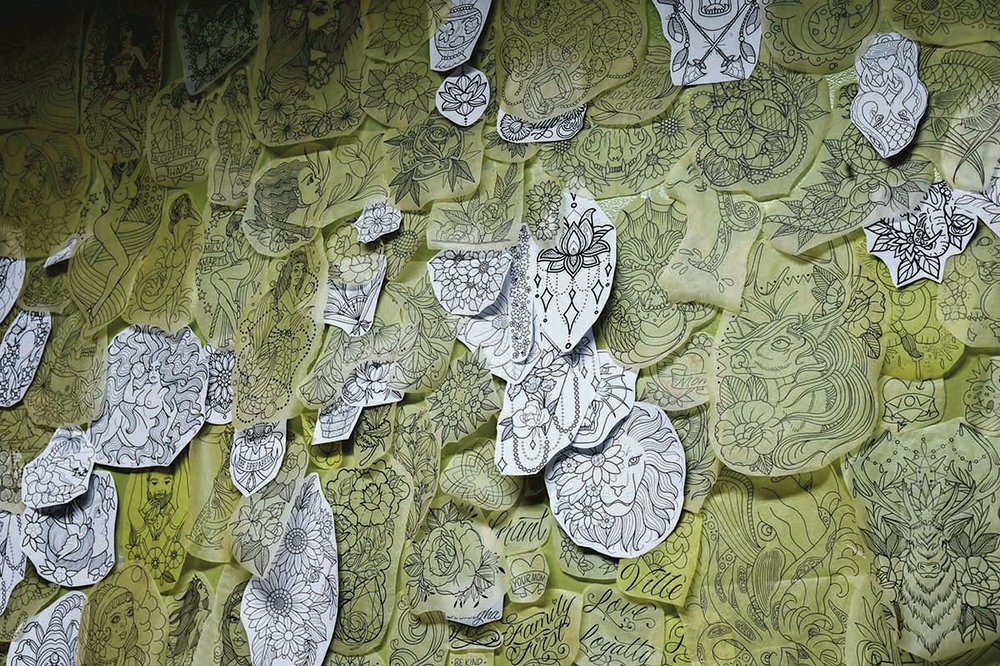 She cited "Miami Ink," as being one of the television programs that aided in this, as well as an unexpected source: nurses.

"I tattoo a lot of nurses. A lot of nurses. You wouldn't believe how many of your nurses are covered in tattoos. I feel like if it wasn't for nurses, really, because nurses are needed everywhere, and they keep getting arm tattoos. So the hospitals have to decide if they want to be short-staffed, or do they want to listen to one old person b - - - - about this lady having a tattoo on her arm while she's saving their life. So that has really helped a whole lot. I thank all of the nurses in the world for doing that."

With the mainstreaming of tattoos, Wilkerson said the door of the profession opened up a bit wider to women.

"When I started tattooing, I guess a lot of women started tattooing because now there's a plethora of fire tattoo women out there." There is still quite a disparity, though, and she estimated the ratio of male to female tattoo artists to be 10 to 1.

Tattooing itself involves using needles to implant ink just below the skin and can be quite painful depending on the location and size of the piece. However, the pain is not always a negative aspect of tattooing. For some, it is cathartic.

"Some people, once they start getting physically hurt, their emotional hurt comes out. And that's where the therapist part of my job comes in. I have people that strictly only come in when they are completely depressed, whenever they're angry, whenever they need some relief. I have a lot of clients that used to cut themselves when they were teenagers. Now, instead of cutting themselves, they get tattoos. It's the same type of release. I cover up a lot of suicidal scars, too."

Though she finds much of her job to be meaningful and has a deep love for the art form, it's not all traditionally inked sunshine and roses.

"There's terrible things about my job, as well, like the people and their reactions, and bodily fluids. I don't like hurting people. It took me almost an entire year to do a solid tattoo because I was afraid of hurting someone. Some people take it really bad, in both the pain and mental aspect. Whenever you're getting hurt like that for so long, some people can't withstand it."

Then there's the sexism she endures.

From not being hired for jobs as a woman because "the owner didn't want someone crying all over the shop all the time," to having to strive to be "one of the guys," to being forced to ward off unwanted attention from male colleagues, the tattoo world is a difficult one for women, Wilkerson said.

"When you're in the tattoo industry and end up starting and you're dating a tattooer, other tattooers look down on you, because they think that you used that man to get in that position. You get so little respect. And overall respect in tattooing is number one."

For this reason, Wilkerson absolutely cannot abide with being referred to by other artists as someone's ex-girlfriend.

Despite all these ongoing, prevalent issues, Wilkerson feels that the climate for women in tattooing is slowly improving.

"I feel like we're on our way already. Women are starting to call out tattooers, which we need more call-outs. There are a lot of men in the tattoo and piercing industry who are going absolutely too far," she said in reference to sexism, assault and molestation within the industry.

At the end of the day, after facing all the hardships of the job, Wilkerson is still up to the challenge, and her longtime clients make it all worth it.

"I have a few longtime clients that have followed me from place to place. Those people are more to me than just customers. After years of talking I get to know these people and I'm honored to be such a permanent part of their lives."