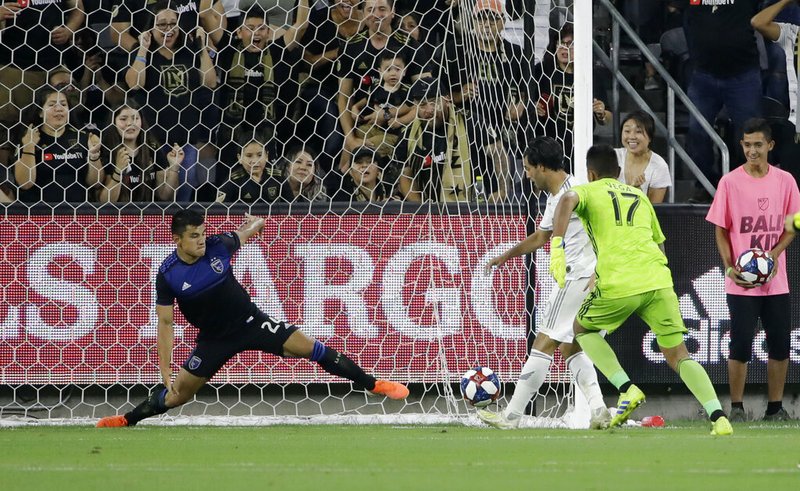 Vela's second goal in the 41st minute highlighted the match as he dribbled past three defenders and goalkeeper Daniel Vega for an easy finish. He also powered a shot off Vega on a penalty kick in the 17th.

Vela ranks fifth in MLS history for goals in a season, moving five away from tying Josef Martinez's record of 31 with eight games remaining.

San Jose coach Matías Almeyda was ejected late in the first half after a long argument with the referee.

Castellanos scored his 10th goal of the season by getting past the defense for Maximiliano Moralez's lofted pass and sending it inside the far post. Castellanos has scored five goals in the past four games.

NYCFC forward Alexandru Mitrita took advantage of a defensive mistake at midfield in the 86th minute, and dribbled down the left side on a breakaway but his shot was denied by Columbus goalkeeper Eloy Room. Keaton Parks also had a late attempt blocked by Room.

It was NYCFC's first clean sheet since July 3 against Seattle.

WASHINGTON — Romero "Kaku" Gamarra scored in the sixth minute, Daniel Royer got his ninth goal on a penalty kick, and New York beat D.C. United in the Atlantic Cup.

Kaku took advantage of a poor clearance and sent it into the back of the net for an early 1-0 lead. The Red Bulls capped the scoring in the 59th, four minutes after D.C. United tied it, when Royer sent goalkeeper Bill Hamid the wrong way.

Ola Kamara, in his first start for D.C. United, scored on a curling shot from the corner of the 18-yard box.

Both teams were reduced to 10 men in the first half. Following a video review, D.C. United star Wayne Rooney was given a straight red card in the 24th minute for elevated contact with Cristian Cásseres Jr. New York defender Amro Tarek was sent off in first-half stoppage time after receiving his second yellow card.