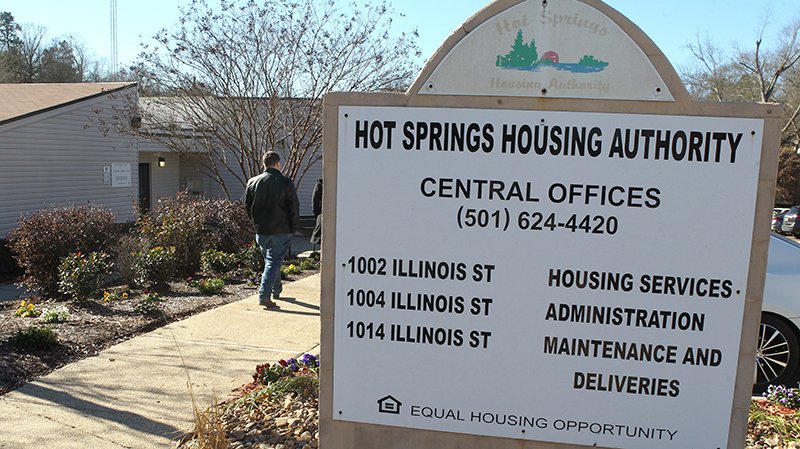 The Sentinel-Record/Richard Rasmussen SECTION 8 UNCERTAINTY: An unidentified man walks toward the Hot Springs Housing Authority’s Illinois Street offices Wednesday. The agency is preparing to notify Section 8 landlords about the possibility of housing-assistance payments being interrupted by the partial government shutdown. - Photo by Richard Rasmussen

Rent subsidies for low-income area residents will not be available after next month if the partial government shutdown is not resolved by then, the Hot Springs Housing Authority's executive director said Wednesday.

Richard Herrington said thousands of residents who live in the area's 658 tenant-based Section 8 properties will be affected if the shutdown extends into March, as his agency will have exhausted its allocation of housing-assistance payments it receives from the U.S. Department of Housing and Urban Development.

The payments go to landlords who participate in the Section 8 program, which caps tenants' rent obligation at 30 percent of gross-adjusted income. The government pays the balance, but Herrington said no funding will be available after February if the shutdown continues. He said HUD allocates the local authority about $2.5 million a year in housing-assistance payments.

"We can guarantee up to February," he said. "That's it. If the president holds his threats the way he said he will, a lot of (landlords) won't get paid for March. They'll be the ones who are going to have to make some very hard decisions on how they're going to operate.

"I hope they don't throw folks out, because it's not their fault. You're talking about a couple of thousand people who are going to be affected. This is a chance for all of our landlords to do something greater than themselves and show how much they really care about their tenants."

The housing authority became a project-based Section 8 landlord last year as part of a $57 million overhaul of all 365 of the city's public housing units, which are now owned by Mountain View Heights LP.

Equity investors who purchased $17 million of Low-Income Housing Tax Credits hold the majority stake in the partnership but are passive participants, the housing authority has said. The authority and the Bennett Group, the Alabama-based developer leading the project, are minority partners overseeing the renovation and management of the property during the 15-year life of the partnership.

Herrington said housing-assistance payments the partnership receives from HUD will also run out at the end of next month if the shutdown continues. That cash flow secures the debt-financing piece of the renovation, including the $16.8 million mortgage held by the housing authority and $30 million in bonds issued by the Arkansas Development Finance Authority.

"We'll be like any other landlord," Herrington said, explaining that the shutdown won't affect the renovation project, which is expected to be completed by spring. "The partnership won't receive any more money until this is resolved."

Herrington said the housing authority is preparing to notify landlords about the possibility of payments ending after February.

"We will either have a meeting or send out a letter to let everyone know what's going on," he said. "We haven't the slightest idea what Washington is going to be doing. We're going day by day. Whoever their mortgage or lien holder is, everybody needs to be dealing with them now and letting them know they need to make arrangements for late payments or substitute payments."

Herrington said reserves built up from savings realized in previous fiscal years are paying the salaries of the housing authority's 11-person staff and the staff of Allied Orion Group, the Houston-based company that manages the partnership's 365 units.

"You make sure you manage your program well enough so you have money left over," he said. "We have money to keep our employees around."