THEY'RE OFF: Horses break from the starting gate during the first race of the 2019 live race meet at Oaklawn Park on Friday.

Despite the lack of morning training, the late January sun was shining on Oaklawn Park Friday and the track looked great for opening day, officials said.

"It is a little chilly, but the sun is shining, as it always does on Oaklawn Park, and the track's in great shape," said Wayne Smith, general manager. "The horsemen are just anxious to get going and I think the fans are just extremely excited to get this thing rolling."

Media Relations Manager Jennifer Hoyt said the opening day crowd of 20,000 was a "great crowd" and began funneling in early before the 12:30 p.m. post time.

"I do know we had 600 reservations for the club today which is one of the best opening day reservations we've ever had," Hoyt said. "I just think that because of the later date, people are just super excited and ready to come out."

Hoyt said the track was closed to training in anticipation of frozen conditions, following an overnight low in the 20s. The closure allowed crews more time to get it into shape for the first day of racing. 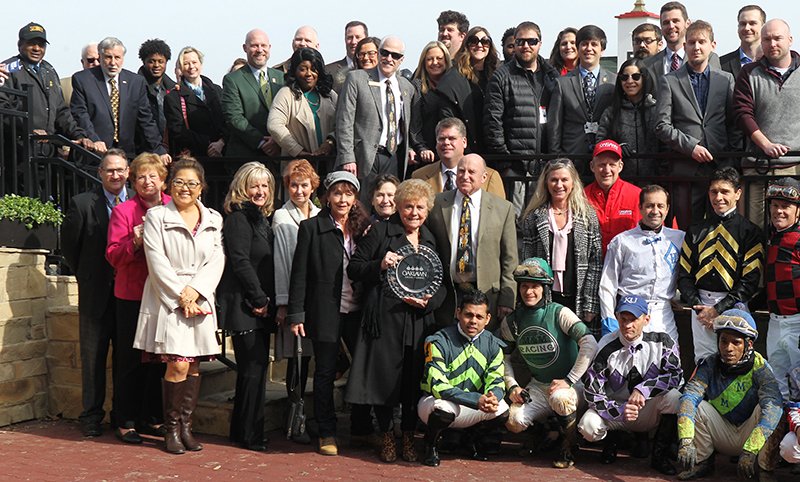 The Sentinel-Record/Richard Rasmussen WINNING CONNECTIONS: Jeannette Snyder, surrounded by her family and friends, as well as Oaklawn Park employees and jockeys, presents the trophy to the winning connections in the Larry Snyder Winner's Circle following the first race Friday at Oaklawn Park. Jeanette Snyder is the wife of legendary jockey and longtime Oaklawn steward Larry Snyder, who died in late October.

"As many folks have been made aware of, we've created a new winner's circle this year and we named it for one of the most successful jockeys in the country -- Larry Snyder," Smith said. "He was a longtime jockey for Oaklawn and a longtime steward at Oaklawn, so we're having his wife come and present the winner for the first race, for the first time ever in our winner's circle, their trophy."

Jeanette Snyder said she was nervous, yet honored to present the trophy. 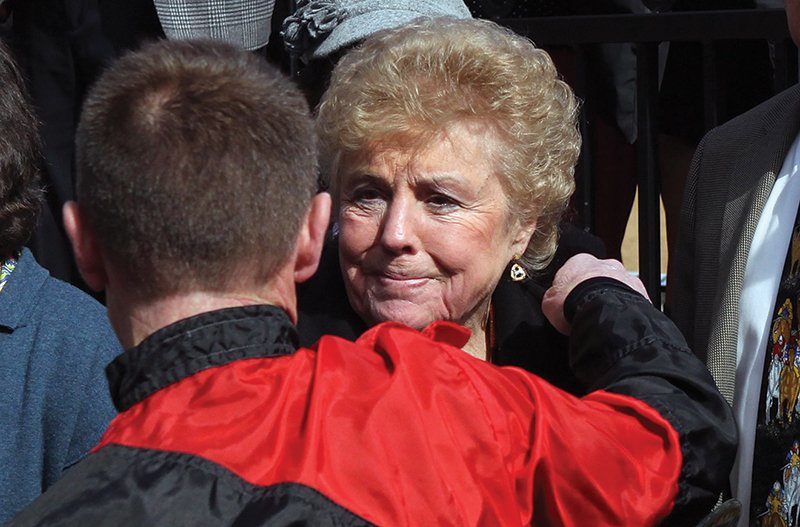 "It's an honor I'll never forget and I know Larry is down here with me ... I'm just very proud to do it," she said.

Smith said Oaklawn was equally as honored to make her a part of the opening day ceremonies.

Today, racing continues and Oaklawn offers it's famous corned beef sandwiches for just 50 cents, which should bring out a bigger crowd.

"I think we'll probably have a bigger crowd (today) because for some reason, everybody loves that 50-cent corned beef and 10-cent sodas," Smith said. "We should have a real big crowd (today). Should be a little warmer and the sun will be shining, so everybody come out and have a corned beef and a soda on us and watch some wonderful racing."