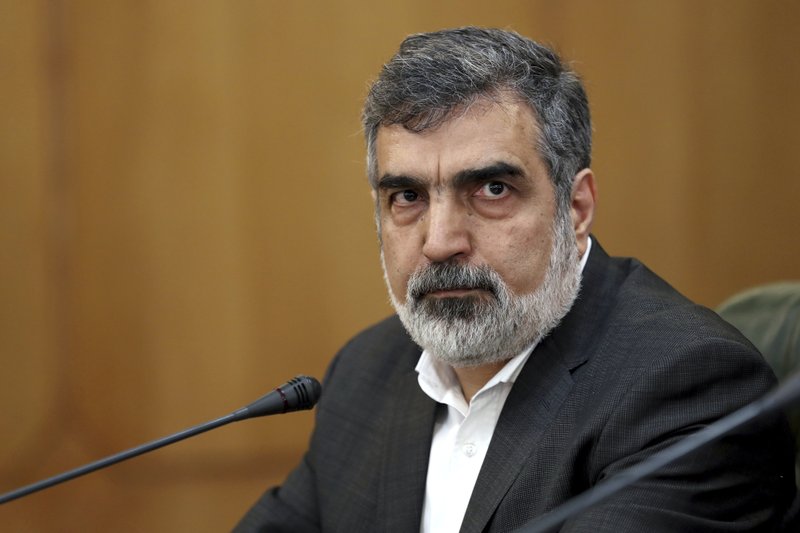 The Associated Press WORLD POWERS: Spokesman for Iran's atomic agency Behrouz Kamalvandi attends a press briefing in Tehran, Iran, Sunday. The deputy foreign minister says that his nation considers the 2015 nuclear deal with world powers to be a "valid document" and seeks its continuation.

TEHRAN, Iran -- Iran on Monday began enriching uranium to 4.5%, just breaking the limit set by its nuclear deal with world powers, while it is still seeking a way for Europe to help it bypass U.S. sanctions amid heightened tensions between Tehran and Washington.

The acknowledgement by the spokesman of the Atomic Energy Organization of Iran to The Associated Press shows that the Islamic Republic trying to increase pressure on those still in the 2015 nuclear deal. It also comes just days after Iran acknowledged breaking the 300-kilogram (661-pound) limit on its low-enriched uranium stockpile, another term of the accord.

Experts warn that higher enrichment and a growing stockpile could begin to narrow the one-year window Iran would need to have enough material for an atomic weapon, something Iran denies it wants but the deal prevented. While the steps now taken by Iran remain quickly reversible, Europe so far has struggled to respond.

There are fears that a miscalculation in the crisis could explode into open conflict. President Donald Trump, who withdrew the U.S. from the nuclear deal over a year ago and re-imposed crippling economic sanctions on Iran, nearly bombed the country last month after Tehran shot down a U.S. military surveillance drone. Even China, engaged in delicate trade negotiations with the White House, openly criticized America's policy toward Iran.

"What I want to emphasize is that the maximum pressure the U.S. imposes on Iran is the root cause of the crisis in the Iranian nuclear issue," said Geng Shuang, a Chinese Foreign Ministry spokesman. "It has been proven that unilateral bullying has become a worsening tumor and is creating more problems and greater crises on a global scale."

On Sunday, Trump warned that "Iran better be careful." He didn't elaborate on what actions the U.S. might consider but told reporters: "Iran's doing a lot of bad things."

Under the deal, Iran has been closely monitored by inspectors from the IAEA, which on Monday verified "that Iran is enriching uranium above 3.67%." The Vienna-based agency did not specify how much beyond the threshold Iran has gone.

Enriched uranium at the 3.67% level is enough for peaceful pursuits but is far below weapons-grade levels of 90%. At the 4.5% level, it is enough to help power Iran's Bushehr reactor, the country's only nuclear power plant.

Behrouz Kamalvandi, a spokesman for Iran's nuclear agency, confirmed the increased enrichment to the AP.

"At the moment our enrichment is at around 4.5%," Kamalvandi said. He did not elaborate.

Kamalvandi separately hinted in a state TV interview broadcast Monday that Iran might consider going to 20% enrichment or higher as a third step, if the material is needed and the country still hasn't gotten what it wants from Europe. That would worry nuclear nonproliferation experts because 20% is a short technical step away from reaching weapons-grade levels of 90%. Kamalvandi also suggested using new or more centrifuges, which are limited by the deal.

Foreign Ministry spokesman Abbas Mousavi said Iran appreciated the efforts of some nations to save the deal, but offered a jaded tone on whether Tehran trusted anyone in the negotiations.

"We have no hope nor trust in anyone, nor any country, but the door of diplomacy is open," Mousavi said.

He also gave a sharp, yet unelaborated warning to Europe about another 60-day deadline that Iran set Sunday. That deadline is Sept. 5, though Iran's senior Vice President Eshaq Jahangiri described it as being Sept. 7. The different dates could not be immediately reconciled.

"If the remaining countries in the deal, especially the Europeans, do not fulfill their commitments seriously, and not do anything more than talk, Iran's third step will be harder, more steadfast and somehow stunning," he said. The remaining signatories to the deal with Iran are Britain, France, Germany, China and Russia.

The U.S. will not waver from its course of maximum pressure against Iran and "will never allow Iran to obtain a nuclear weapon," Vice President Mike Pence told a pro-Israel Christian organization in Washington.

"Iran must choose between caring for its people and continuing to fund its proxies who spread violence and terrorism throughout the region and breathe out murderous hatred against Israel," Pence said.

The U.S. has sent thousands of troops, an aircraft carrier, nuclear-capable B-52 bombers and advanced fighter jets to the Middle East. Mysterious oil tanker attacks near the Strait of Hormuz, attacks by Iranian-backed rebels in Yemen on Saudi Arabia and Iran's downing of a U.S. military drone have raised fears of a wider conflict engulfing the region.

French President Emmanuel Macron has spoken with Iranian President Hassan Rouhani and said they are trying to find a way by July 15 to resume international dialogue with Iran. It remains unclear what Europe can do, because Iran wants it to help Tehran sell its crude oil abroad.

Macron is sending his chief diplomatic adviser, Emmanuel Bonne, to Tehran on Tuesday, although it was not immediately clear how long he would stay or with whom he would meet.

U.S. sanctions have targeted Iran's oil sales and top officials, including Supreme Leader Ayatollah Ali Khamenei. It's also unclear what international company would risk U.S. sanctions to help Europe trade with Iran outside of the exceptions granted for food and medicine.

Mousavi said he didn't know where an Iranian supertanker was heading when it was seized off the coast of Gibraltar. Authorities there said they seized the Grace 1 last week and confirmed Monday it was fully loaded with crude oil. Its suspected destination was a refinery in Syria that is under European Union sanctions.

Hard-liners in Iran have demanded a British oil tanker be seized in response. State TV said Britain's ambassador to Tehran had been summoned Monday for a third time.

A lawmaker also has suggested that Iran charge ships moving through the Strait of Hormuz, something Mousavi dismissed while insisting Iran's right to patrol the waters off its coast.

"We are responsible for maritime protection of the Persian Gulf and the Strait of Hormuz. This is our region. This is our gulf," he said, reiterating Iran's longtime stance. "This is our innate duty to secure this region and sustain its security. Countries that claim from thousands of miles from here that they should guarantee the maritime security here are speaking exaggeratedly."

Iran's Defense Minister Gen. Amir Hatami also offered his own warning to the British over the tanker's seizure: "It won't remain without a response."