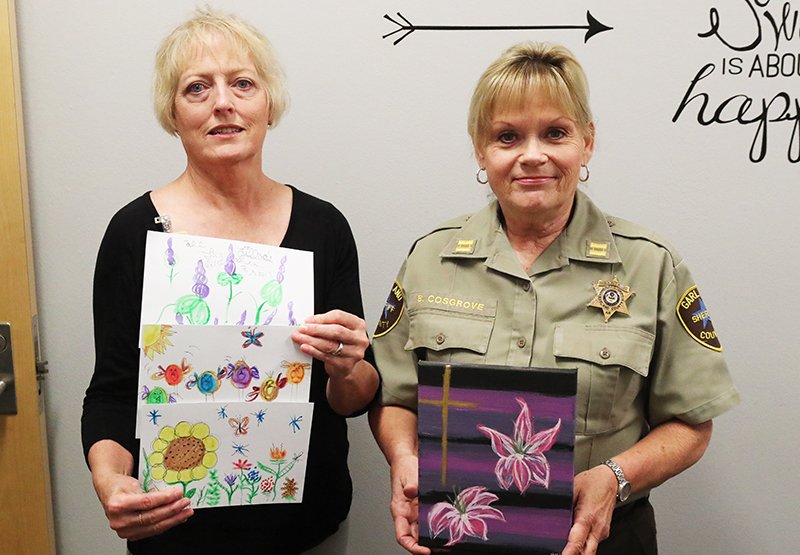 The Sentinel-Record/Richard Rasmussen CREATIVE SPACE: Volunteer Ann Wilson, left, and Capt. Belinda Cosgrove display student artwork created in an art class by inmates at the Garland County Detention Center. The six-week classes are open to 10 students each week and give a creative outlet for inmates to express themselves in a positive way.

Inmates at the Garland County Detention Center are learning to express themselves creatively in a positive way through art thanks to one of the many programs offered at the jail.

With collaboration from four local artists and the program's staff at the detention center, inmates have been involved in six-week courses learning how to express their emotions in an appropriate way, according to Garland County sheriff's Capt. Belinda Cosgrove.

"Some of the work that I'd do is an illustration, perhaps, of (inmates') plans for the future," Wilson said of Getting Ahead. "They were so creative in so many ways and I spent four years thinking of that and, really, two years into it I was going 'Somebody needs to be teaching an art class out there. Somebody needs to do that.'

"We had a graduation and I happened to be sitting behind Capt. Cosgrove and when it was over, I leaned over and I said 'Have you ever had an art class out here before?' She said 'Yeah, we had an intern that was teaching one and I've been looking for one, hadn't found one. Would you do it?' And I had never thought (of) me. I thought others; somebody. The 'yes' was out of my mouth before I could even really think about it."

Wilson, Marilyn Hurst, Dorelle Hogan, and Beth Lewis are just the handful of volunteers currently involved with the art program, though they hope to expand to involve any local artists who would like to share their talents to teach a future class.

"We go an hour and a half on Saturday mornings and we're right in the middle of our third six-week session," Wilson said. "Some (students) come back, some get out. It's a different class almost every Saturday, but not totally different people. Some were in the Getting Ahead class that I just helped with and said 'I'll see you Saturday.' It wouldn't have happened without Getting Ahead."

Wilson, who retired years ago from National Park College, said the exciting thing for her is to see that in each class, which is limited to 10 students, there are always 10 unique pieces of work by the end of the class.

"I hope we are inspiring creativity," she said. "That's one of the joys, to me, is to see everyone's work is different. One of the things that I love about art and being creative is the clock stops, and that's what I've told them. To me, I've never been bored a day in my life because I've got that creativity to fall back on and that I enjoy. If we instill that in two people, then it's well worth it."

The goal of each week's class is to bring in inspiration for a project that can be completed in the hour and a half time frame. Cosgrove said this can help boost the inmates' self-esteem.

"Some of our inmates have never completed anything in their life so this may be the first time that they've actually done and finished a project," she said. "That's a big deal for people who haven't ever done that in the past. And it's tangible -- they see the results of their creation immediately. They have that satisfaction."

There are a few keys to the success of programs like this one, Cosgrove said.

"We're often given a lot of credit -- program staff -- but there's so much more involved than us just doing it. It's the security getting the inmates up. It's the sheriff supporting it. That is key to us being successful."

In addition, she said the community stepping in to support such programs is also crucial to success.

"The community has stepped forward and they provide the support that we need and we're going to have some positive results and it's going to have a positive impact on our community with everything that's going on. We know that they're leaving a lot better than when they came in," Cosgrove said.

"We're very fortunate. We have a very giving community. They really step up and they want to help because these people are returning to our community. Ninety percent of them are going to be our neighbors and so if we can give them some skills and resources, we know there will be fewer victims and less crime. Ultimately, that's what law enforcement is about -- a safer community."

Elrod said in an email he could not be more excited for this program and others.

"Under the direction of Sheriff McCormick, we establish these programs with the community's best interest at heart," he said. "We've only started this new program on (Saturday), however, I'm confident we will experience positive results.

"This art class is in-line with our facility operating philosophy of Direct Supervision, which focuses on inmate behavioral management. Through inmate programming, we are able to reduce inmate idleness, and ultimately enhance staff and inmate safety. Through this new course, we are able to take a new approach toward inmate anxiety, depression, and stress management."

Elrod said outside agencies often contact the detention center for information about its programs. He said U.S. Rep. Bruce Westerman, R-District 4, attended an inmate graduation ceremony earlier in the year, and that he has previously been afforded the opportunity to showcase these programs at the Arkansas Sheriff's Association Winter Conference.

"Of course we could not offer these programs without the remarkable service from our detention personnel, as well as our community volunteers," he said. "Appreciation goes to all staff for remaining focused on the overall mission and vision we hold, which has supported our successful establishment as the leading facility in the State in operations and services provided."

Cosgrove said it's ultimately important to recognize the students in a positive way.

"So many of our inmates have only been recognized for bad things, so this is a great opportunity to recognize them for something positive," she said.