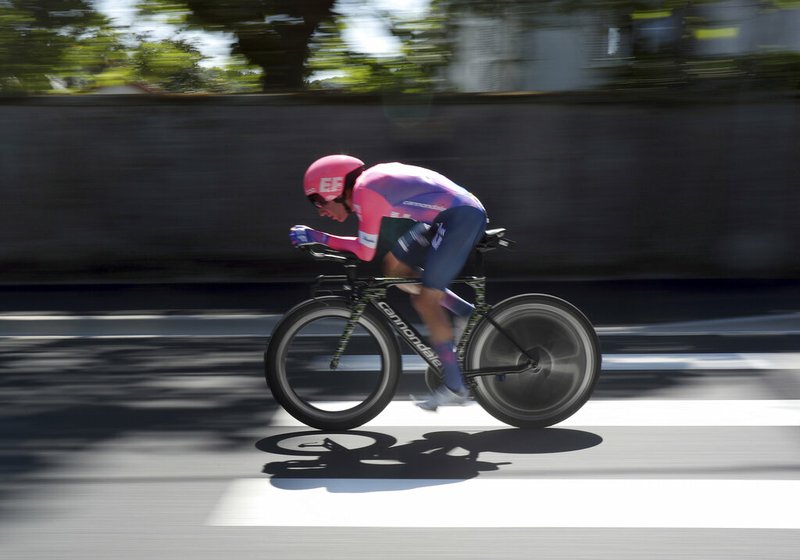 The Associated Press OLD ROOKIE: Canada's Michael Woods rides Friday during the thirteenth stage of the Tour de France, an individual time trial over 27.2 kilometers (16.9 miles) with start and finish in Pau, France. Unusually, Woods is a rookie at cycling's greatest race at the ripe age of 32 and also has an unusual back story as a former track athlete who switched late to pro cycling

PAU, France — If there was a smiley-face jersey for the happiest rider at the Tour de France, to go alongside the wearer of the iconic yellow shirt, Canadian Mike Woods would be in the running for it.

A rookie at cycling's greatest race at an unusually ripe age -- 32 -- and with an unusual story as a former track athlete who switched late to pro cycling, Woods knows that his first Tour might also be his last.

"I'm really savoring every moment," says Woods, one of just two Canadians racing this Tour. "Mentally, that's a really powerful tool against my competition. But it's also making me just a really happy person."

If this does prove to be a unique experience, Woods has banked memories for a lifetime. Many, but not all, of them are good. After the thrill in the first week of ranking in the top 10, among big names fighting for the Tour title, Woods crashed on Stage 8 and tumbled down the standings.

But even then, with his chin bloodied, shorts torn and mood "upset and disappointed," Woods says he still caught himself smiling as he rode in more than 14 minutes behind the stage winner in Saint-Étienne, awed by the spectacle of the Tour and its joyous roadside crowds.

"Honestly, every day has been this, like, exceptional experience," he says.

Woods' promising running career -- he ran the mile in under 4 minutes as a teen -- was derailed by injury, forcing a late conversion in his mid-20s to bike racing.

Woods first caught the eye of Jonathan Vaughters, now his boss at Tour team EF Education First, when he posted a record-breaking time in training up a climb in Hawaii, on a trip during which Woods also proposed to the woman who is his wife, Elly.

But hiring a rider so late was also a risk, because "many of the hardwired neurological skills that you need to be a bike racer, for maneuvering in the peloton and for going around corners fast, those are really hard to learn when you are past 16, 17 years old," Vaughters says.

As well as crashing on Stage 8, Woods also hit the deck on Stage 11, breaking two ribs when another racer slammed into him from behind.

He is soldiering on, looking forward to mountain climbs in the Pyrenees and Alps where he is strongest.

"He would have fewer bandages on him had he learned how to race when he was 15 years old as opposed to 25 years old," Vaughters says. "It was a little bit scary for us to put him into the Tour de France but he certainly had earned his shot."

Although new to the Tour, Woods is no cycling rookie, having ridden the tours of Italy and Spain and winning a world championship bronze medal. His preparations for the step up to the added intensity of the Tour included an offseason with a coach who specializes in helping riders improve their handling of high-speed descents.

"I am never going to be able to do a one-handed wheelie while, you know, waving to a crowd. But I have worked on my biking skills quite a bit," Woods says.

And the upside, he maintains, is that the Tour is more special to him than he suspects it would have been had he first experienced the race as a younger man.

"I'm really lucky to be doing it at this age, because I'm not taking it for granted," he says. "It's a far more advantageous position to be in, mainly because I think I'm enjoying it more."