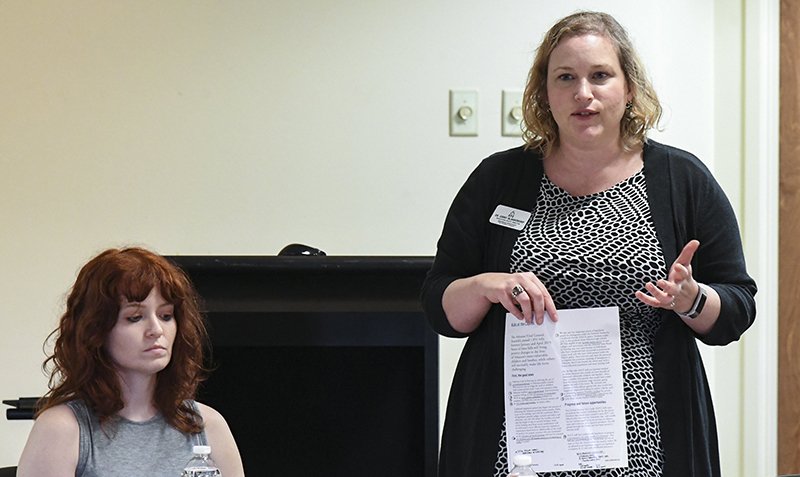 Arkansas Advocates for Children and Families gave a legislative update and discussed the 2020 census and the findings of the Kids Count Data Book Tuesday during the Ouachita Area Youth Council's bimestrial meeting at Ouachita Behavioral Health and Wellness.

"We're for good policy that works for kids that is research-based and that can help move the needle where Arkansas is on education issues," AACF Education Policy Director Ginny Blankenship said.

"I was told about six months before (the legislative) session began that we should be bracing ourselves for the perfect storm: massive budget cuts in education K-12, all sorts of terrible things. And I am pleased to tell you that none of those things came to pass. It could have been a whole lot worse."

According to documents provided at the meeting, 1,699 bills were filed; 1,091 bills were passed; 12 bills from AACF agenda were introduced; AACF testified 10 times before legislative committees; and sent 16 advocacy alerts, resulting in 719 advocates contacting their legislators 2,334 times by phone or email.

One notable AACF-backed piece of legislation, Act 557, included banning the use of corporal punishment in all public schools for students who "meet certain criteria," including "non-ambulatory students and nonverbal autistic students," Blankenship said.

Another piece of legislation, Act 89, will "help get dyslexia and reading intervention for kids who have been committed to the Division of Youth Services, so juvenile offenders, who are often in there for nonviolent offenses," she said.

Act 641, which Blankenship described as "another great bipartisan effort," now requires all K-5 students to have at least 40 minutes of recess per day.

"This has been many, many years in the works, and it was with a bipartisan effort. They were finally able to help DACA students who graduated from Arkansas high schools to be eligible to pay in-state tuition if they are accepted into a public state university in Arkansas. Before that, they were not able to pay their own way at all. In fact, they were charged international student tuition, which effectively meant that none of them could ever afford to go to college or they would be in massive debt for the rest of their careers. That was a huge win. That took a lot of work by a lot of different coalitions working together."

Act 837 will make "sure that the state board of nursing can issue licenses to people that have completed certain coursework and have work permits if they have DACA status," Blankenship said.

"That helps everyone because we have a huge shortage of nurses all over the state."

AACF Outreach Director Rebecca Zimmermann explained the details of Act 189, which she described as a "major juvenile justice reform bill that will create a program in which kids will go in and get an assessment about their specific needs. For children who are deemed by that assessment to be low risk, they will be able to go into community-based services instead of going into detention services."

A separate portion of Tuesday's presentation featured information on the importance of an accurate 2020 census.

"For just a 1 percent under count in Arkansas, we could lose $1 billion over a decade. One person not counted? We lose about $33,000 over a decade," she said.

In 2010, only 80.8 percent of households in Garland County completed the census, Zimmermann said.

A large portion of undercounted Arkansans are children, and Zimmermann said an estimated 1.3 million children nationwide will not be counted in 2020.

"That means less money for critical programs for children because the government thinks we have less children than we do that need to access these services," she said.

She emphasized that wherever a child is on April 1, 2020, that is where they are to be counted, even if it is a temporary living situation.

The presentation also featured an introduction of the findings of the 2019 Kids Count Data Book.

"We partner with the Annie E. Casey Foundation every year to release the Kids Count Data Book information for Arkansas. They look at 16 indicators of childhood well being and rank states based off those indicators. The good news is we moved up from 41 to 40. The bad news is that we still have a lot of work to do," Blankenship said.

About one in five children in Arkansas live in poverty, with even higher rates among racial minorities, and Arkansas has the highest teen birthrate in the nation, according to the report.

Overall, Arkansas ranked 40th in the nation for childhood well being.

During a question-and-answer session, the topic of Arkansas Career Training Institute students was broached, particularly over issues of transportation caused by the institution's switch to a nonresidential model.

"I get your point. It's always about money, and transportation is an underlying issue of everything we're working on. It's really hard to fix, especially when you're working on a state level," Blankenship said.

When asked by an attendee if she felt that ACTI students without transportation would "fall through the cracks," Blankenship said: "It sounds like they will. That is unfortunate."