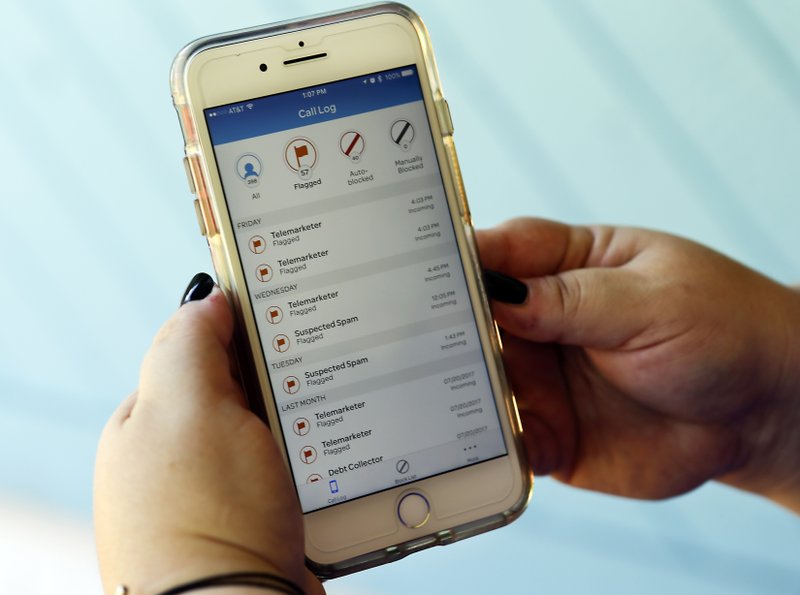 This Aug. 1, 2017, file photo, shows a call log displayed via an AT&T app on a cellphone in Orlando, Fla. Telecom giants such as AT&T and Verizon this year have started implementing anti-robocall technology that can help people spot fake numbers.

The Federal Communications Commission's move could make call-blocking widespread and help consumers dodge annoying robocalls, which have exploded into a problem that pesters Americans on the level of billions of calls a month.

One caveat: Phone companies don't actually have to do anything, and they could start charging you if they do -- just as they now charge for some caller ID features and other extras. The FCC expects phone companies to offer these tools for free, but it doesn't require them to.

The rise in debt collectors, telemarketers and, most worrisome, fraudsters ringing up consumers' phones have led the FCC and Congress to push phone companies to do more. The companies have been slow to act against such automated calls on their own.

Robocalls have increased as cheap software makes it easy to make mass calls. Scammers don't care if you've added your number to the government's Do Not Call list, and enforcement is negligible. There are 5 billion per month in the U.S., according to call-blocker YouMail. That works out to 14 calls per person.

Thursday's FCC vote could potentially be a powerful counter against unwanted calls. While call-blocking apps already exist, you have to turn them on or ask for them. Now, along with clarifying that both wireless and landline companies can block unwanted calls without asking customers first, the FCC said that wireless carriers are also allowed to block all callers who aren't on a customer's contact list. You would have to request that from your phone company.

On the flip side, the measure might inadvertently lead to blocking of automated calls about flight changes, school closings and appointment reminders, Republican Commissioner Michael O'Rielly warned. Royal Credit Union, a small Midwestern bank, worries that widespread call-blocking would make it harder for their fraud alerts and low-balance warnings to reach customers.

The rules will let consumers "opt out" and ask their phone company not to block anything.

Commissioner Jessica Rosenworcel, a Democrat, criticized the agency Thursday for not requiring that call-blocking services be made free.

FCC Chairman Ajit Pai believes phone companies will have an incentive to step up and offer these services for free.

"These robocalls that are being placed on their own networks are a hassle and a cost for them to handle," Pai said in an interview.

Verizon said it will "evolve" its free call-blocking tool for wireless customers and be able to provide spam alerts and blocking more broadly, but spokesman Richard Young said there will not be "short term across-the-board blocking." He did not say how Verizon plans to change its offerings for landline customers, who today can sign up for a third-party blocking service.

AT&T did not answer questions about its plans but said it is committed to fighting illegal and unwanted calls. T-Mobile said it hasn't made a decision yet on whether to make default free call-blocking tools. Sprint, which charges for its call-blocking service, said last week that it was looking at "additional solutions" and was optimistic that the changes would let it "take more aggressive actions."

There are other attacks against robocalls in the works, like trying to get rid of "spoofed" numbers. That's when a scammer fakes the number on your phone to look like it's coming from the same area code you have, in an effort to get you to pick up.

The industry has been working on a system that will ensure that the number that comes up on people's phones is real. That's only beginning to roll out, and to work well, all the phone companies have to implement it. There's no hard government deadline, but Pai has threatened regulatory action if it doesn't happen this year. Thursday's vote took procedural steps to make it easier to enforce that threat against major phone companies.

The Senate, with near-unanimous support, passed a bill in May that would give phone companies an 18-month deadline to put this anti-spoof system, called Stir/Shaken, in place, as well as give regulators more tools to go after scammers. But it's not clear how the bill will fare in the Democrat-controlled House, which has several anti-robocall proposals that go further.

Whatever happens, determined scammers and telemarketers will likely find ways to get through, just as malware on personal computers is still a problem despite antivirus software.