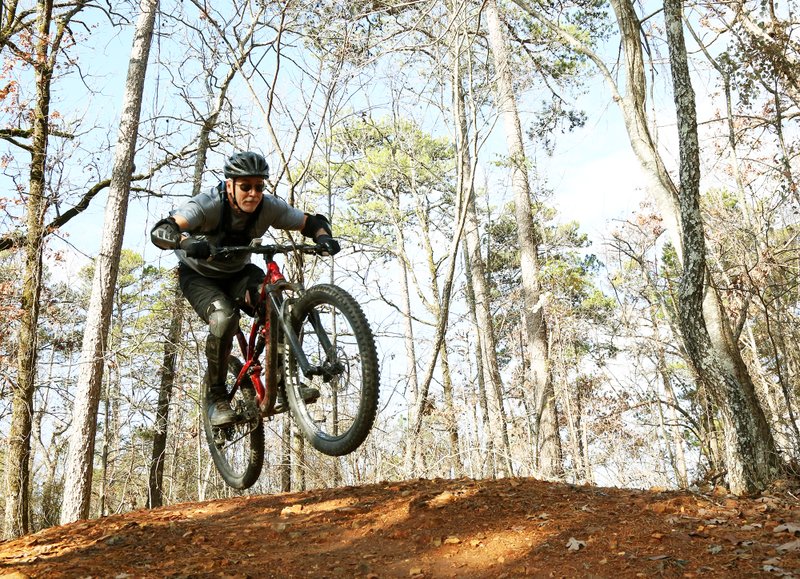 The Sentinel-Record/Corbet Deary. A rider on the Blue Route of the Northwoods Trails System.

The planning process to allow a bicycle trail across Hot Springs National Park to connect a trailhead on Pullman Avenue with the new Northwoods Trails system is in its final stages, the National Park Service said Tuesday.

The Park Service said in a news release it will take public comment through July 15 on a proposed new rule that would allow bicycle use on a new .65-mile trail connection across federal land.

National Park Service regulations require promulgation of a special regulation to designate new trails for bicycle use off park roads and outside developed areas, according to a summary of the proposed new rule available online at https://bit.ly/2R7g431.

The proposed rule would implement the preferred alternative included in the Pullman Avenue Trail Connection/Environmental Assessment and authorize the park superintendent to designate bicycle use on the Pullman Avenue Trail Connection. The proposal does not include any existing park trails, which are not open -- and would not become open -- to bicycles under the proposed rule.

Park Superintendent Laura Miller said the connection would offer park visitors and neighbors better access to trails and recreational opportunities in and around the park. The natural surface, multiuse trail would be designed to enhance safety as well as the visitor experience for both pedestrians and bicyclists while protecting natural and cultural resources, she added.

"This is one of the last steps of the process," Miller said. "We have drafted an environmental assessment where we looked at our options and basically, our options were to build the trail or not."

According to materials that were shared during an initial public comment meeting Jan. 30, 2018, the Bike Rule is a federal regulation for designating routes and managing bicycle use within park units in the system. This rule would "result in special regulation to allow new construction of a multiuse trail on which bike use could be authorized," for the Pullman Avenue trail connection.

"This is because by allowing bikes in the park, we're introducing a new use," Miller said. "That requires a special regulation. We have drafted that new regulation language that is now available for public comment until July 15.

"When that's complete, we will compile all the comments and as long as there's no opposition we will finish the environmental assessment and add this new regulation. So we're nearing the end, but this is still part of the process."

The proposal states that after the trail is constructed, the rule would require the superintendent to notify the public prior to designating the trail for bicycle use "through one or more of the methods listed in 36 CFR 1.7, and identify the designation on maps available at Park visitor centers and on the Park website."

According to the federal register, where the proposed trail crosses or intersects other park trails closed to bicycle use, signage would clearly indicate allowed uses and restrictions at those intersections.

The proposed rule would also authorize the superintendent to establish closures, conditions, or restrictions for bicycle use on the trail after considering public health and safety, resource protection, and other management activities and objectives, provided public notice is given under 36 CFR 1.7(a).

The superintendent would not authorize bike use until the planning and environmental review process is complete, a written determination as required by 36 CFR 4.30(e)(2) is complete, a final rule is promulgated, and trail construction is complete.

All submissions received must include the words "National Park Service" or "NPS" and must include the docket number or RIN for this rule making. Comments may be posted without change to http://www.regulations.gov, including any personal information provided.