The Sentinel-Record/Grace Brown CRIME SCENE: Family members embrace, above, in the 200 block of Portland Street where one man was killed Thursday afternoon.

Hot Springs police on Friday identified the victim of Thursday's homicide as Kenneth Kelly Jr., 23, of Hot Springs and is seeking any video surveillance from the area of 200 Portland St., where the crime occurred.

Police made an appeal Friday that "anyone with information to come forward."

"We also ask that if anyone has video surveillance in the area of Portland Street to please contact Det. Scott Lampinen at 501-321-6789 ext. 6741," police said in a news release.

Hot Springs police say they are investigating the death of a Hot Springs man on Thursday afternoon on Portland Street as a homicide.

Officers responded to a shots fired call in the 200 block of Portland Street, off Crescent Street, at around 1:30 p.m. and arrived to find one male victim inside the residence at 200 Portland, Hot Springs police Cpl. Joey Williams said in a news release. 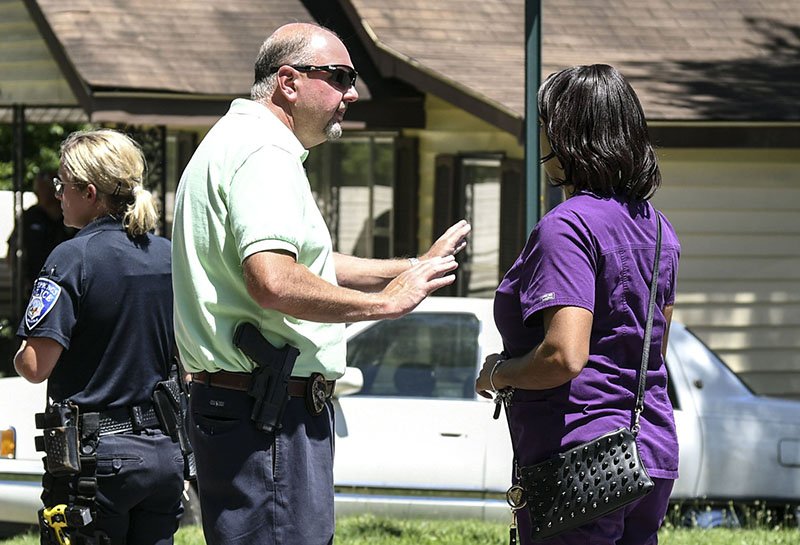 The Sentinel-Record/Grace Brown IN DISCUSSION: Hot Springs Police Chief Jason Stachey, above, center, talks to a family member at the scene.

Several family members arrived on scene shortly after the shooting reportedly occurred, some claiming to have left the house not long before the shooting.

One woman at the scene who identified herself as the victim's cousin told The Sentinel-Record, "Someone ran into the house and shot my cousin."

The victim was pronounced dead at the scene by the Garland County coroner and "our detectives are now investigating this as a homicide," Williams said. "We will update with further information as it comes available."