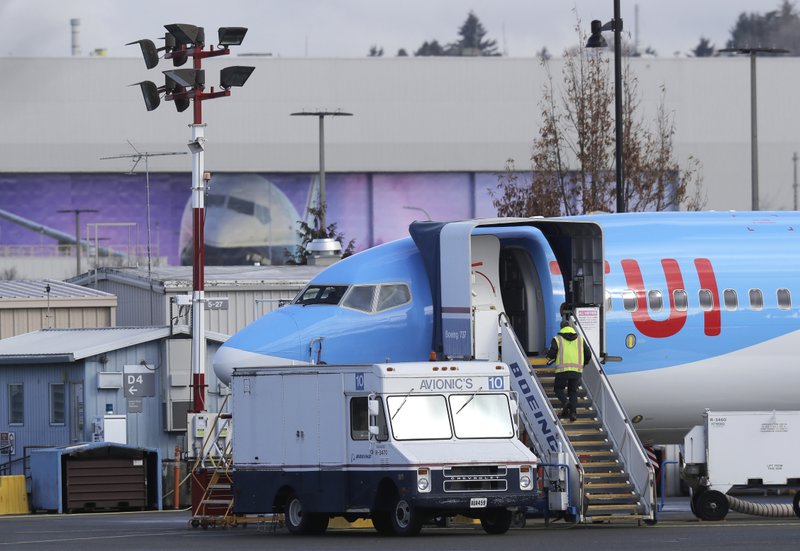 A worker walks up steps to the right of an avionics truck parked next to a Boeing 737 MAX 8 airplane being built for TUI Group at Boeing Co.'s Renton Assembly Plant Wednesday, March 13, 2019, in Renton, Wash. President Donald Trump says the U.S. is issuing an emergency order grounding all Boeing 737 Max 8 and Max 9 aircraft in the wake of a crash of an Ethiopian Airliner. (AP Photo/Ted S. Warren)

WASHINGTON -- The Federal Aviation Administration issued an emergency order Wednesday grounding all Boeing 737 Max aircraft in the wake of a crash of an Ethiopian airliner that killed 157 people, a reversal for the U.S. after federal aviation regulators had maintained it had no data to show the jets are unsafe.

The decision came hours after Canada joined some 40 other countries in barring the Max 8 from its airspace, saying satellite tracking data showed possible but unproven similarities between the Ethiopian Airlines crash and a previous crash involving the model five months ago. The U.S., one of the last holdouts, also grounded a larger version of the plane, the Max 9.

Daniel Elwell, acting head of the FAA, said enhanced satellite images and new evidence gathered on the ground led his agency to order the jets out of the air.

The data, he said, linked the behavior and flight path of the Ethiopian Airlines Max 8 to data from the crash of a Lion Air jet that plunged into the Java Sea and killed 187 people in October.

"Evidence we found on the ground made it even more likely that the flight path was very close to Lion Air's," Elwell told reporters on a conference call Wednesday.

Satellite data right after the crash wasn't refined enough to give the FAA what it needed to make the decision to ground planes, Elwell said. But on Wednesday, global air traffic surveillance company Aireon and Boeing were able to enhance the initial data to make it more precise "to create a description of the flight that made it similar enough to Lion Air," Elwell said.

The Ethiopian plane's flight data and voice recorders will be sent to France for analysis, Elwell said. Some aviation experts have warned that finding answers in the crash could take months.

Officials at Lion Air in Indonesia have said sensors on their plane produced erroneous information on its last four flights, triggering an automatic nose-down command that the pilots were unable to overcome.

President Donald Trump, who announced the grounding, was briefed Wednesday on new developments in the investigation by Elwell and Transportation Secretary Elaine Chao, and they determined the planes should be grounded, the White House said. Trump spoke afterward with Boeing CEO Dennis Muilenberg and Boeing signed on.

Airlines, mainly Southwest, American and United, should be able to swap out planes pretty quickly, and passengers shouldn't be terribly inconvenienced, said Paul Hudson, president of flyersrights.org, which represents passengers. The Max, he said, makes up only a small percentage of the U.S. passenger jet fleet, he said.Boeing issued a statement saying it supported the FAA's decision even though it "continues to have full confidence in the safety of the 737 MAX." The company also said it had itself recommended the suspension of the Max fleet after consultations with the FAA and the National Transportation Safety Board.

The groundings will have a far-reaching financial impact on Boeing, at least in the short term, said John Cox, a veteran pilot and CEO of Safety Operating Systems.

In addition to those that have already been grounded, there are more than 4,600 Boeing 737 Max 8 planes on backlog that are not yet delivered to airlines.

Even so, Cox thinks Boeing will recover, because the planes typically fly for 30 to 40 years, and any needed fix will be made quickly, he said.