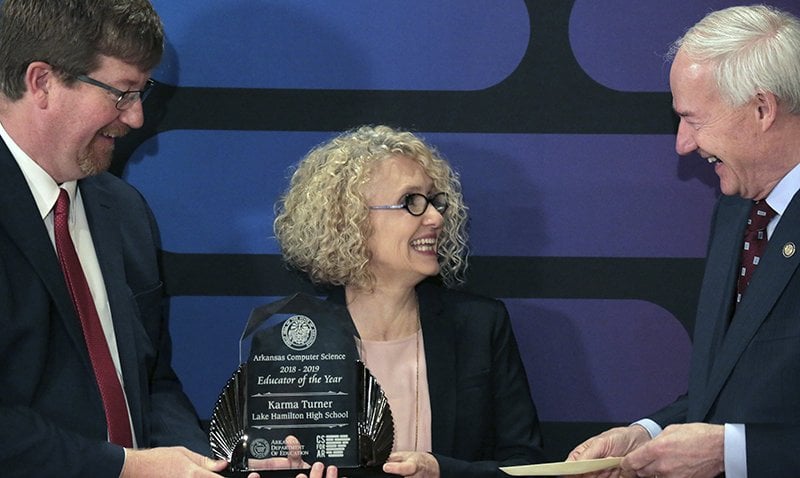 Arkansas Democrat-Gazette/John Sykes Jr. WINNER: Karma Turner, center, a teacher at Lake Hamilton High School, accepts a $12,500 check from Gov. Asa Hutchinson, right, while Arkansas Department of Education Commissioner Johnny Key, left, holds her trophy after she was named the first recipient of the Arkansas Computer Science Educator of the Year award during a ceremony in the governor's conference room at the state Capitol Thursday morning.

The five state finalists, including Turner, were recognized at a ceremony in the governor's conference room with Arkansas Gov. Asa Hutchinson.

"Shock. Disbelief. Is this real? Greatly honored! I know the other four educators named as finalists and I am greatly honored to be named with them," Turner said.

Hutchinson congratulated all of the finalists and their contributions to computer education in Arkansas, especially Turner.

"The creativity and enthusiasm of these five stellar teachers is evident in classrooms around the state. These teachers, and so many like them, are the reason we are on the national map as a leader in computer-science education," Hutchinson said in a news release.

"It is a pleasure to recognize these finalists and honor Ms. Karma Turner as our state's first Computer Science Educator of the Year. These educators are preparing our students for a good career, and in the process, they are ensuring Arkansas will have a solid workforce that will keep our economy strong."

"Since the launch of the Computer Science Initiative, we have made tremendous progress in building a nationally recognized program that serves as a model for all states," Arkansas Department of Education Commissioner Johnny Key said in the release.

"We could not have achieved this success without the guidance and hard work from outstanding teachers who are devoted to their students each and every day. The five finalists not only serve as leaders at their schools and across the state, they also serve as models of excellence around the country. I commend each of them for their commitment to education, and I congratulate Ms. Turner for receiving this high honor. Through their commitment to education, we are leading the nation in student-focused education," Key said in the release.

The #CSforAR / #ARKidsCanCode specialist team selected five state finalists from the 30 total submitted applications from around the state.

Upon education and computer science representatives' review of the finalists' applications, Turner was selected as the winner.

Funding from the special project unit formed to implement Hutchinson's Computer Science Initiative, the ADE Office of Computer Science, provided $2,500 and a recognition plaque for each finalist.

As the winner, Turner received an additional $12,500, along with a 2019 Computer Science Educator of the Year trophy.

Over her 24 years of educating, Turner has made various other accomplishments.

Earlier this year, Turner was named the recipient of the Aspirations in Computing Educator of the Year Award from the National Center for Women and Information Technology for 2019.

"I just plan to keep on learning and teaching to the best of my ability," Turner said.

"This is a very well deserved honor for Karma and I know she will be a wonderful representative for Arkansas computer science as a whole," Lake Hamilton School District Superintendent Steve Anderson said.

"Mrs. Turner's contribution to computer science at Lake Hamilton is immeasurable. She took an abandoned program three years ago and grew enrollment from approximately 100 per quarter to over 325 this year. Due to Karma's leadership in developing and transforming our program, we have added two more teachers with full course and student loads in grades 6-8 including robotics and computer science in addition to the required coding classes," Lake Hamilton School District Associate Superintendent Shawn Higginbotham said.

"What separates Karma from other teachers who have been successful for many years is her drive to become even more effective. She is constantly looking for ways to move her teaching to higher levels. She has been a leader in our building in trying new and innovative teaching techniques and tailoring them to fit her classroom. As her principal, I figured out, fairly early on, that the best thing I could do for her was to get out of her way. She is truly a self-starter. Karma has poured herself into developing the computer science program and has turned it into something better than anything I could have imagined. Her class is not a place where students sit quietly pecking away at keyboards, but rather a place where kids innovate, think, and explore," Lake Hamilton Junior High School Principal J.J. Humphries said.

"I am excited that Karma is receiving this much-deserved recognition. She is a phenomenal teacher in the truest sense. She forges high-performance relationships with her students and then connects them to an exciting and rigorous curriculum," said Lake Hamilton High School Principal Donald Westerman.

Turner reciprocated these feelings of goodwill and thanked her administrators for their past support.

"I couldn't do this without my supportive administrators for encouraging me and allowing me to do all the things. I don't remember any of them telling me 'No,' to any of my wild ideas. And my students for being the motivation for me to keep pursuing my knowledge so that I may better serve them," Turner said.

Just as Turner sees her students as her motivation, she hopes that receiving this honor will do the same for her students.

"Hopefully they will feel important and empowered to pursue their computer science aspirations or gain confidence to do whatever they choose to do," she said.