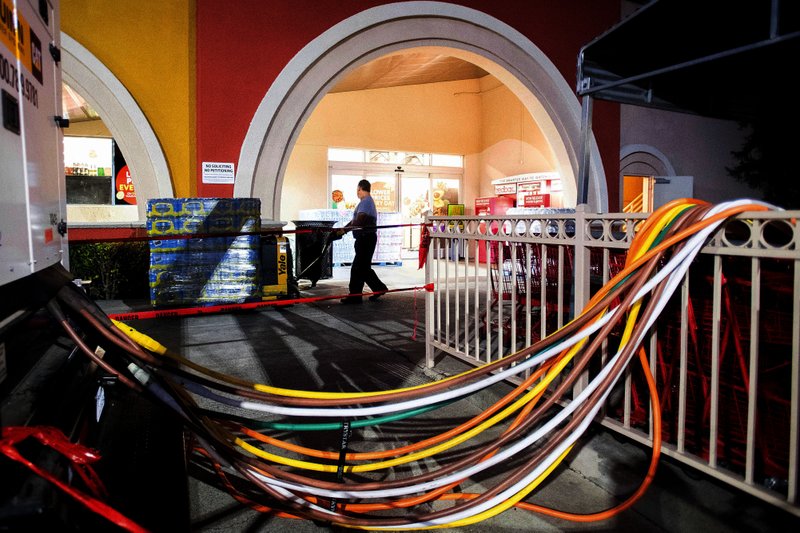 LOS ANGELES -- Even as the winds gusted dangerously as forecast, California's biggest utility faced hostility and second-guessing Thursday for shutting off electricity to millions of people to prevent its equipment from sparking wildfires.

Gov. Gavin Newsom criticized Pacific Gas & Electric, and ordinary customers complained about the inconveniences caused by the unprecedented blackouts that began Wednesday, with many wondering: Did PG&E go too far in its attempt to ward off more deadly fires? Could the utility have been more targeted in deciding whose electricity was turned off and when?

PG&E, though, suggested it was already seeing the wisdom of its decision borne out as gusts topping 75 mph raked the San Francisco Bay Area amid a bout of dry, windy weather.

"We have had some preliminary reports of damage to our lines. So we'll have to repair those damages before we can safely energize the line," spokesman Paul Doherty said.

Because of the dangerous weather in the forecast, PG&E cut power Wednesday to an estimated 2 million people in an area that spanned the San Francisco Bay Area, the wine country north of San Francisco, the agricultural Central Valley and the Sierra Nevada foothills. By Thursday, the number of people in the dark was down to about 1.5 million.

PG&E cast the blackouts as a matter of public safety, aimed at preventing the kind of blazes that have killed scores of people over the past couple of years, destroyed thousands of homes, and run up tens of billions of dollars in claims that drove the company into bankruptcy.

A blaze ripped through a trailer park in Calimesa, a city about 65 miles east of Los Angeles, destroying dozens of homes. The fire was started when trash being hauled caught fire and the driver dumped the load aside a road, according to Riverside County officials.

Many of those affected by the outages, which could last as long as five days, were not so sure about the move.

Sergio Vergara, owner of Stinson Beach Market, situated on scenic Highway 1, on the Pacific Coast just north of San Francisco, operated the store with a propane generator so his customers could have coffee, milk, meat and frozen meals.

"I'm telling you as a plain human being, there is no wind, there is no heat," he said. "We never saw something like this where they just decide to shut off the power, but on the other side -- preventing is a good thing, but it's creating a lot of frustration."

But in powered-down Oakland, Tianna Pasche said: "If it saves a life, I'm not going to complain about it."

Faced with customer anger, PG&E put up barricades around its San Francisco headquarters. A customer threw eggs at a PG&E office in Oroville. And a PG&E truck was hit by a bullet, though authorities could not immediately say whether it was targeted.

Sumeet Singh, PG&E's vice president of community wildfire safety, urged people to be kind to workers out in the field, saying the employees and contractors "have families that live in your communities."

"Let's just ensure their safety as well, as they are doing this work in the interest of your safety," Singh said.

The governor said PG&E was to blame for poor management and should have been working on making its power system sturdier and more weatherproof.

"It's decisions that were not made that is leading to this moment in PG&E history," Newsom said. "This is not from my perspective a climate change story so much as it is a story of greed and mismanagement over the course of decades."

Experts say the big shut-off will yield important lessons for the next time.

Deliberate blackouts are likely to become less disruptive as PG&E gets experience managing them and rebuilds sections of the grid so that outages can be more targeted, said Michael Wara, a researcher on energy and climate policy at Stanford University.

Grids are built and operators are trained to keep the power on at all times, so the company and its employees have little experience with intentionally turning the electricity off in response to rapidly changing weather, he said.

"That's a skill that has to be learned, and PG&E is learning it at a mass scale right now," Wara said.