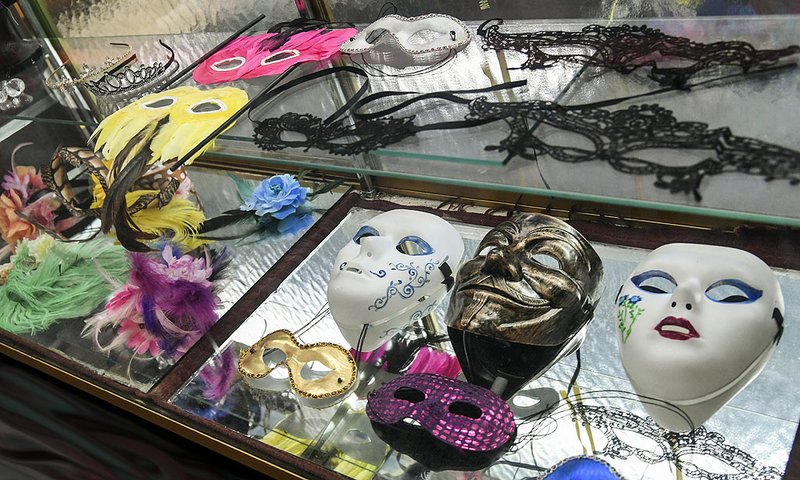 Masks at Hot Springy Dingy. - Photo by Grace Brown of The Sentinel-Record

Hannah Mills and her husband, David, came to Hot Springs from Boston in 1978 for warmer weather.

"We knew we wanted to move south where it was warmer, but we didn't really know where we wanted to go. So I opened up a map. I closed my eyes and I jammed a finger down on the map, and it landed on Hot Springs. We came and checked it out and fell in love. People always joke about doing that kind of thing, but I really did it, and it was perfect. It was meant for me," said Mills, owner of The Springy Dingy.

"At that time, we were surrounded by topless clubs and bars. It was a little different town. The girls were constantly saying they needed costumes. But there was nobody really that had costumes, or that I could find to buy costumes from. And so I finally decided to teach myself how to sew," she said.

In 1978, Mills saw a need and filled it, leading her and David to open The Hot Springy Dingy costume shop.

While the shop doesn't see many showgirls perusing its racks nowadays, it does have a varied clientele.

From 9 a.m. to 6 p.m. Monday through Thursday and 9 a.m. to 7 p.m. Friday and Saturday, the shop outfits kindergarten graduations with caps and gowns, local and statewide theatrical and operatic performances, holiday figures and school mascots, and at one time, even a production of "The Sunshine Boys" involving Dick and Jerry van Dyke.

Costumes are the main source of Mills' business, but she has also catered to some more unique, non-costume commissions, she said.

Over the years, she has created a renaissance wedding dress, turned a client's deceased loved one's blouse into a teddy bear and sewn a traditional Indian burial sari at the request of a terminally ill woman who intended to wear it at her own funeral.

"It really was a labor of love, because that really touched my heart," Mills' said of her work on the sari.

The Hot Springy Dingy has its work cut out for it year-round. However, the Halloween season is always the shop's busiest time of year.

"Halloween is not just for kids anymore," Mills said. "We dress all the best-dressed ghouls. We can turn you into the ghoul of your dreams."

While the shop does offer costumes for purchase, renting is the more popular option.

A full, adult costume 24-hour rental typically costs $35 to $45, but some fall outside that range. Children's rentals are usually about $30. Mills said that the most expensive costume rental at The Springy Dingy is a mascot costume, which costs $65 for a full day's rental. She said the least expensive rental in the store is $10 for individual accessory pieces. The shop also offers term rentals, with the base price of the rental for one day being charged, with another $5 charged each additional day the costume is rented.

"We really try to make it convenient and reasonable," she said.

The shop not only boasts reasonable rates, but high-quality products, as well.

"The thing that really makes it so much different from anything that you could order on Amazon or Walmart or anything like that is the fact that all of mine are one-of-a-kind. You don't see them anywhere else, and they're all quality and well made," Mills said.

The unique nature of Mills' costumes is thanks to the fact that she often takes orders for custom created pieces, which usually take her only four hours to create.

"People make a demand or request, then I create the outfit, and then I added to my inventory," she said. "I have literally thousands of costumes for rent that we've created over the years."

Though fads change from Halloween to Halloween, Mills said that there are some classic standbys that are tried and true hits, including vampires, pirates, Renaissance fashions, and "dance hall girls."

"You're in Hot Springs, Ark., a gambling mecca. Roaring Twenties is always going to be big," she said.

As of late, steampunk styles and superheroes have also been quite popular, she said.

"Oh, a lot of superheroes, because there's so many anything that goes along with that movie genre. There's always a big call for superheroes."

Mills' said that she loves all the other aspects of her job as well, especially the creative element.

"I love working with people. I love the creativity of creating not just the costume, but a persona. We do the makeup, too. We create the entire persona for somebody. When people come in and say, "I've got to dress up, but I have no idea what I want to do," I look at the person. I look at their general shape. I look at their hair, look at their eyes, look at basically what type of personality they are. Then I start pulling out costumes for them to try on."

Upon inspection of Mills' elaborate costumes, it could be assumed that the materials are available only to professionals. However, she said that most of the materials used in the shop come from Walmart and Hobby Lobby.

"We don't use anything that that's not common," she said.

While some costumers attend years of schooling or learn under apprenticeships, Mills' took neither of those routes to arrive where she is professionally today.

"It is self-taught. But I've had some great teachers," she said.

Mills' also gave credit to David, saying, "I could not do this without my husband. My husband has taught himself how to sew as well. We're both costumers. And even more than that, he's my finder of all things."

She referred to running the shop as "a team effort." Mills does not have any employees. Instead, "I have had several people that work with me," she said. "David and I have actually taken our first steps toward retirement."

Despite their impending departure from the store, Mills reassured that even after the duo retires, they will visit and help out around the shop often. The Hot Springy Dingy has been outfitting the outrageous and unique of Hot Springs for over 40 years, and according to Mills, there's no end in sight.