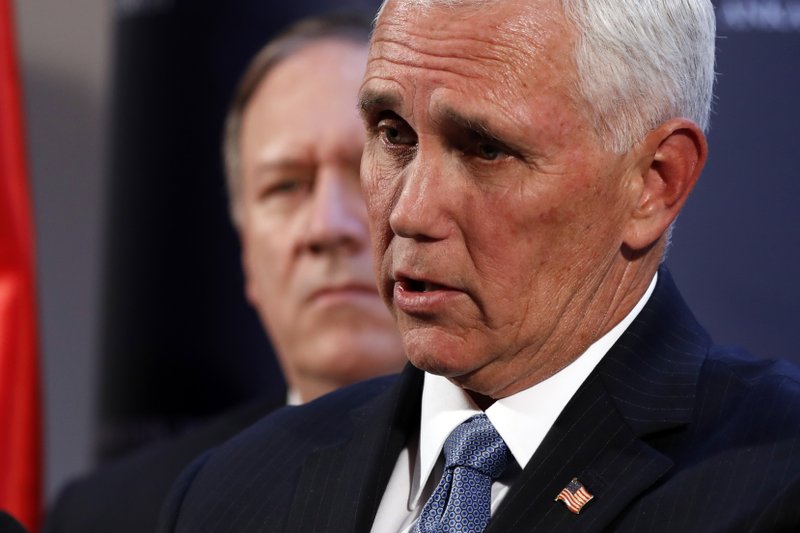 Vice President Mike Pence speaks at the U.S. ambassador's residence during a news conference with Secretary of State Mike Pompeo on Thursday after their meeting with Turkish President Recep Tayyip Erdogan in Ankara, Turkey. The Turkish assault on northern Syria in the wake of President Donald Trump's troop withdrawal from the region has jeopardized a goal often spotlighted by Trump: global freedom to worship for religious minorities. Top Trump advisers said a Thursday ceasefire would help minority faiths, but it's not yet clear that the pact will give them the durable protection Kurdish control had offered. - AP Photo/Jacquelyn Martin, File

The Turkish invasion of northern Syria in the wake of President Donald Trump's troop withdrawal from the region could put to the test Trump's stated commitment to global freedom of worship for religious minorities.

The fighting between the Turks and Kurds has raised fears for the safety of Syrian Christians, Yazidis and other minority faiths at the hands of Turkish President Recep Tayyip Erdogan's mostly Muslim forces.

At the same time the crisis is unfolding, the Trump administration is proposing to drastically reduce the number of refugees admitted to the U.S. to historic lows, cutting slots nearly 80% from their 2016 levels.

"We see this as a real mismatch. The Trump administration has reduced refugee resettlement slots at exactly the wrong time," said Nazanin Ash, vice president for public policy at the International Rescue Committee, which resettles refugees.

As recently as last month, the president vowed to support international religious freedom around the world and rolled out plans at the United Nations for a $25 million investment in the cause.

But then he alarmed evangelical Christians and refugee advocates in the U.S. last week by withdrawing protection for America's Kurdish allies in northern Syria, opening them to attack by the Turks, who regard them as terrorists with aspirations for their own separatist state.

The invasion has unleashed a new humanitarian crisis, with at least 160,000 people driven from the homes, according to the United Nations, and has stirred fears of ethnic bloodletting against religious minorities in formerly Kurdish-controlled northern Syria.

"The Kurds share Western values and have been stalwart defenders of the rights of religious minorities. In stark contrast to this, Turkey has a dark history in this context," John Hagee, a conservative evangelical pastor, longtime Trump supporter and chairman of Christians United for Israel, warned in an email.

The cease-fire brokered by the U.S. with Turkey on Thursday contains language about protecting religious and ethnic communities. And Vice President Mike Pence gave assurances that he and Erdogan "spoke at great length about the importance of protecting religious minorities in the region."

But it is not clear the agreement will provide the minority faiths the longer-term protection that the Kurds had offered. And refugee advocates in the U.S. worry about the fate of those hoping to find haven in the United States.

Tony Perkins, a conservative Christian who chairs the U.S. Commission on International Religious Freedom, said before the cease-fire announcement that in light of the fighting, he is hopeful the Trump administration will revisit its plans to cut the refugee cap to 18,000.

Trump announced $50 million in stabilization aid to Syria last weekend that would be partly devoted to protecting religious minorities, though Hagee warned that absent details on how it would be used, that spending "does not breed a sense of optimism."

Beyond the steep cuts in refugee slots, Syrian Christians and other minorities affected by the conflict could also find it hard to get into the U.S. because of the extra screening imposed on refugees from certain Muslim countries under Trump's travel ban.

U.S. refugee admissions of Syrian Christians fell more than 50% between fiscal years 2016 and 2019, according to an Associated Press analysis of State Department data, while Syrian Yazidi admissions fell to zero.

Krish O'Mara Vignarajah, president of the Lutheran Immigration and Refugee Service resettlement agency, predicted it will be very difficult for persecuted religious minorities affected by the latest fighting in Syria to get into the U.S.