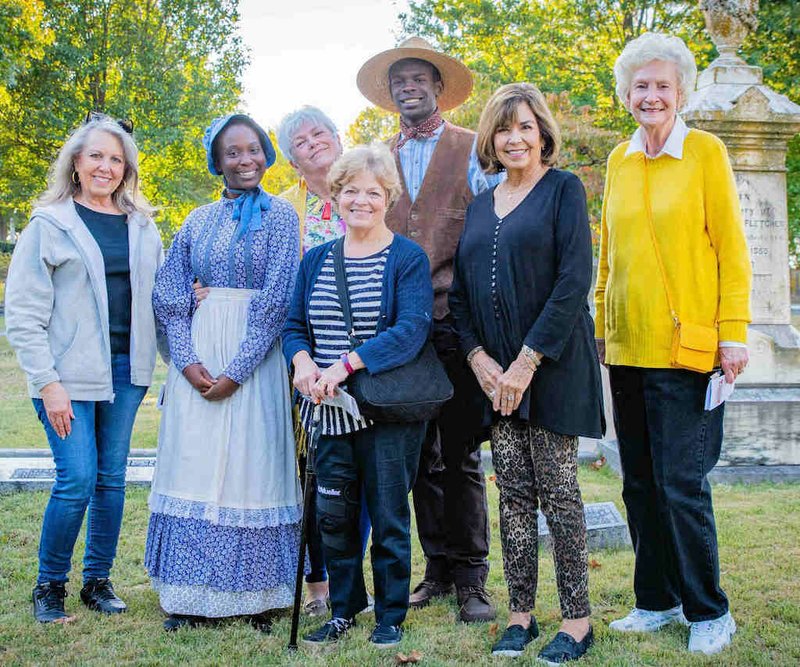 As an annual sponsor of Mount Holly's Tales of the Crypt in Little Rock, members of the United States Daughters War of 1812 were given a VIP tour of the performances by 21 students of Parkview Arts/Science Magnet School on Oct. 8.

Drama students research a person buried in Mount Holly. Then, on the second Tuesday evening of October, they dress in period costumes created by award-winning local costumer Debi Manire and deliver short monologues or dialogues to highlight the history and lives of their character, a news release said.

Audiences are led through the cemetery by guides with candles, stopping at the graves where student actors are stationed. Many local teachers award extra credit to students who attend.

Over a thousand people attend Tales of the Crypt every year. Admission is free to the public.

U.S.D. 1812 members said they were pleased that three of the characters were connected to U.S.D. 1812 in some way: Jeanne Fox Weinmann, eighth president National of U.S.D. 1812, portrayed by Dorothy Johnson; Maria Elizabeth Keatts Thibault, daughter of War of 1812 veteran Lt. Henry Keatts, who is also buried at Mount Holly, portrayed by Bailey Bradford; and Peter Caulder and Eliza Hall Caulder, portrayed by Jayson Holt and Jerriah Brown.

Caulder, a veteran of the War of 1812, is a pioneer of Arkansas. He helped to build Fort Smith and was a settler in Marion County. The Caulders, with their children and grandchild and hundreds of other free blacks, were expelled from Arkansas prior to the Civil War.

Print Headline: U.S.D. members get VIP tour of 'Tales of the Crypt'