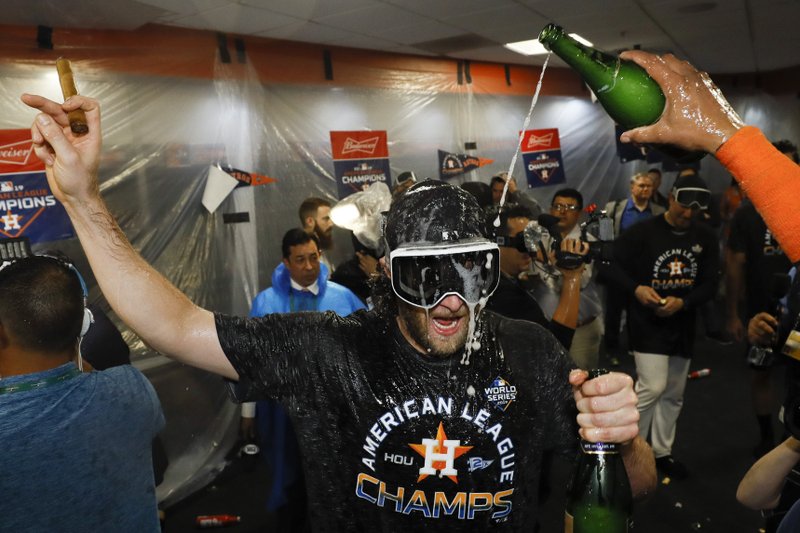 The Associated Press CAPITAL HILL: Houston Astros starting pitcher Gerrit Cole celebrates in the locker room Saturday after Game 6 of the American League Championship Series against the New York Yankees in Houston. The Astros won 6-4 to win the series 4-2.

Now this is a serious World Series throw-down.

Gerrit Cole, Justin Verlander and Zack Greinke vs. Max Scherzer, Stephen Strasburg and Patrick Corbin -- all of them All-Star starters, still pitching at their peak.

It's a mound meeting that every fan can enjoy, the Houston Astros against the Washington Nationals.

Bregman and fellow MVP candidate Anthony Rendon certainly did their parts to make this the Year of the Home Run. And José Altuve lit up Minute Maid Park with his walk-off homer to beat the Yankees in the AL Championship Series.

But the focus of this Fall Classic is right on the rotations. Houston opened as a 2-1 favorite at the Las Vegas sportsbooks.

Cole is set to throw the first pitch on Tuesday night in Houston. He led the majors with 326 strikeouts, was second to Verlander in the big leagues with 20 wins and topped the AL with a 2.50 ERA.

Cole was acquired by the Astros a few months after they won the 2017 World Series. He has fit in fine with his Houston teammates and also has gotten acquainted with some of the Washington aces -- the teams share the Ballpark of the Palm Beaches spring training complex in Florida.

"I know a few guys in their rotation, and I'm personally excited that they're in this position, and I'm just very excited to get in there," Cole said late Saturday night.

"They've worked their tails off. I know a lot of the guys on the team, and I know how they prepare," he said. "I'm looking forward to the challenge."

"Anthony Rendon is one of the greatest hitters in the game right now," Cole said. "There's no real way to get him out. You just kind of hope that he misses some balls or he scorches them right at your guys, I guess.

"I've been watching him since I was in college. It's very unique what he's been able to do and he's just a pleasure to watch play."

The clubs saw each other back in February when they played in the exhibition opener, and Scherzer gave up a homer to the first batter of the game.

"The World Series comes through Houston. I like the sound of that. I think it should be that way for many years to come," Bregman said.

No slight to Bregman and other big hitters here: Altuve, the ALCS MVP, postseason star George Springer and top shortstops Trea Turner and Carlos Correa. And not to overlook the young stars on this stage for the first time, rookies like Juan Soto and Yordan Álvarez.

Yet in an era when teams search for new pitching strategies -- witness the Astros' parade of relievers in Game 6 of the ALCS -- the two clubs left figure to rely heavily on their starters.

"Philosophically, whether it's about the new-age opener or pulling guys third time through, most of the people that support that haven't had Verlander or Cole on their team," he said.

The Nationals stack up just fine, too. Consider their staff includes Aníbal Sánchez, who took a playoff no-hit bid into the eighth inning.

The Astros, who began as the National League expansion Colt .45s in 1962, led the majors in setting a franchise record for wins. Their playoff path was more of a struggle, beating wild-card Tampa Bay in the deciding Game 5 of the AL Division Series and then stopping the 103-win Yankees on Altuve's pennant-winning homer off Aroldis Chapman in the ninth inning.

The Nationals, who started out as the Montreal Expos in 1969, took the reverse route.

A season after letting slugger Bryce Harper leave as a free agent, the Nats were just 19-31 in May. The slow start prompted speculation that manager Dave Martinez would be fired and management would sell off stars at the trade deadline.

Instead, the Nationals bounced back. They earned a playoff spot, eliminated the favored Los Angeles Dodgers in the NL Division Series and swept the surging St. Louis Cardinals behind NLCS MVP Howie Kendrick.

For Washington, the city gets its first World Series since the Senators played in 1933. For the Nationals, the old October question: rest or rust?

The Nationals will have a full week between games while the Astros get only two days off. A fact on this: Boston had two more days of rest last year and beat the Dodgers. But before that, the past nine champions were the clubs that had less rest.