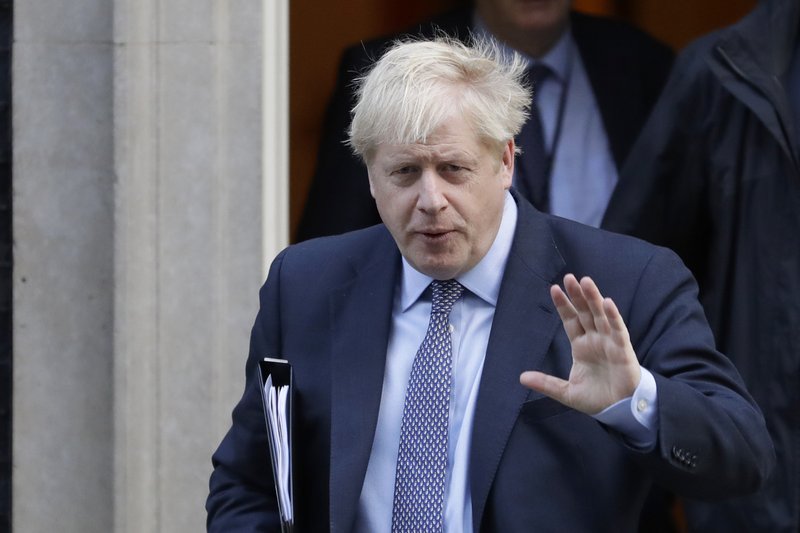 LONDON -- British Prime Minister Boris Johnson faces a frenzied week of activity in Parliament, and possibly in the courts, as he tries to woo rebellious lawmakers in time to meet the Oct. 31 Brexit deadline.

Johnson has vowed to avoid needing yet another extension to that deadline, even though he has formally asked -- in distinctly unenthused tones -- for a delay that is being considered by European Union leaders.

EU officials haven't yet responded to his request for more time. They are torn between a wish to finally put the Brexit issue to bed and a devout desire to avoid the economic ramification of Britain leaving without a divorce deal in place.

Johnson on Sunday used surrogates to make the case that he likely has the votes needed to gain passage for his new Brexit plan and won't need any delay.

British Foreign Secretary Dominic Raab told the BBC he believes Johnson has enough support to get his deal through Parliament, but added the government would keep talking with its Northern Ireland ally, the Democratic Unionist Party, to persuade it to back the deal.

So far, the party, which holds 10 seats in Parliament, has refused to support Johnson's agreement because it treats Northern Ireland differently than other parts of the U.K.

"We'll keep talking to the DUP and see if there's any further reassurances that can be provided," Raab said.

The DUP votes might well give Johnson a comfortable margin, but it seems steadfast in its opposition to the plan, which replaces an earlier divorce deal negotiated by Theresa May's government but rejected three times by Parliament.

Today will also feature more legal action, more arm-twisting, cajoling and veiled threats by Johnson and his ministers and more amendments designed by lawmakers to stymie Johnson's plan to have Britain leave the 28-nation bloc on Oct. 31.

In the midst of all this, EU leaders and officials across the English Channel were pondering whether to grant the British leader a Brexit extension that he doesn't even want.

As required by law, Johnson sent a letter to the EU late Saturday night seeking a delay to Britain's impending Oct. 31 departure. He waited until the last possible moment, withheld his signature and immediately followed it with a signed letter indicating that he doesn't actually favor another Brexit extension.

"My view, and the government's position, (is) that a further extension would damage the interests of the U.K. and our EU partners, and the relationship between us," Johnson wrote to European Council President Donald Tusk.

His decision to send a second letter saying he doesn't really want an extension is likely to trigger court challenges from opponents who believe he intentionally set out to block Parliament's intent even if he technically complied with legal requirements.

The Court of Session in Scotland is already considering the matter and it may end up being decided in the U.K. Supreme Court, which in September ruled that Johnson had acted unlawfully when he suspended Parliament for five weeks as the Brexit deadline crept closer.

The court action is aimed at keeping Johnson from taking Britain out of the EU without a deal.

Johnson has long declared that he plans to take the U.K. out of the EU on Oct. 31 with or without a divorce deal, and his minister in charge of Brexit again emphasized that stance.

"We are going to leave by Oct. 31st," Michael Gove insisted Sunday. "We have the means and the ability to do so."

Gove also said he was holding a special meeting to discuss Operation Yellowhammer, the government's "no-deal" planning apparatus, to make sure Britain is ready for an Oct. 31 departure. The government's own analysts have warned an abrupt break with the EU could lead to recession, massive delays at British ports, and shortages in food and prescription medicine.

The EU's chief Brexit negotiator, Michel Barnier, said Tusk would consult with other leaders "in the next days" about Johnson's request, but most signs indicate the EU would prefer an extension to an abrupt no-deal Brexit.

While Johnson's Conservatives are focused on getting more votes, the opposition Labour Party was calling for a second referendum on the whole question of leaving the EU.

Labour's Brexit spokesman Keir Starmer said it is "inevitable" that lawmakers opposed to Brexit will put forward an amendment seeking a second referendum -- something strongly opposed by Johnson and his government.