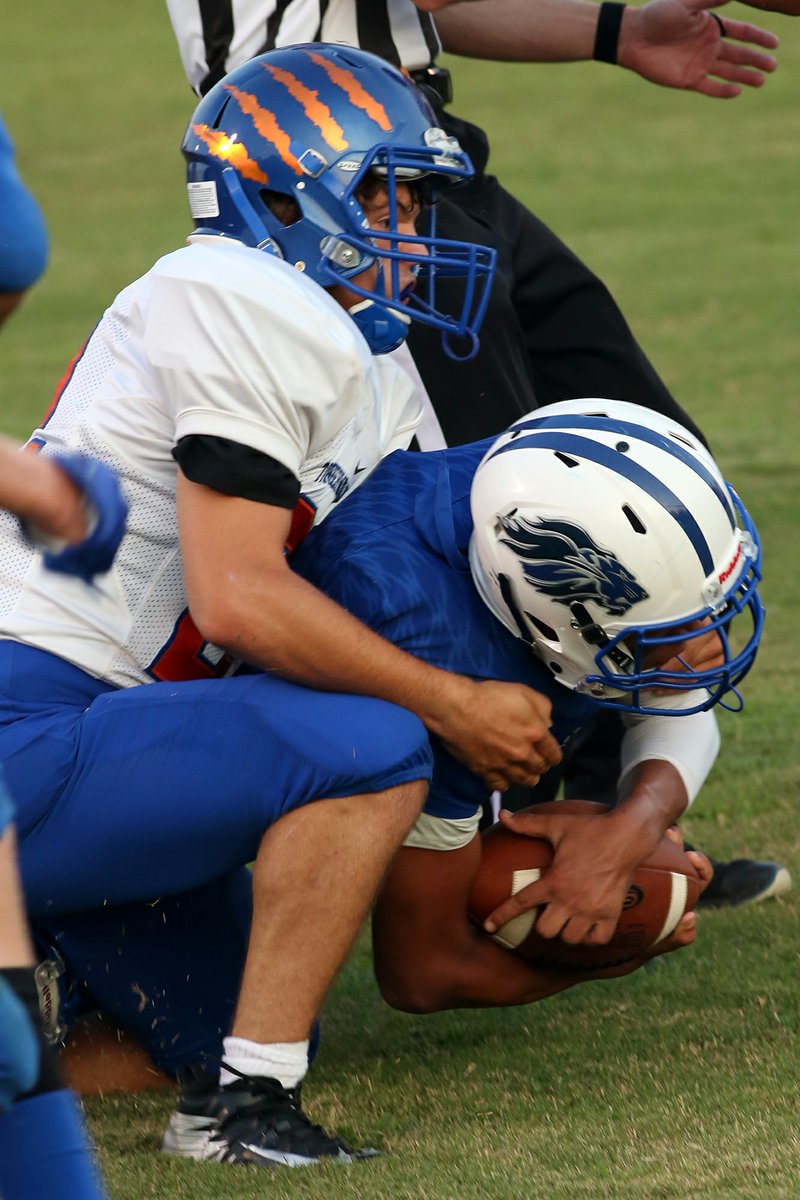 Special to The Sentinel-Record/Corbet Deary HE'S IN: Jessieville sophomore running back Matthew Huff falls into the end zone to score a touchdown for the Lions in the first quarter against Cedar Ridge. The Lions defeated the Timberwolves, 57-0.

The Lions (1-0) pounced on the miscues to take a 35-0 lead at the half, triggering the sportsmanship rule and a running clock for the final 24 minutes. They scored five touchdowns on their final five possessions before halftime, taking advantage of an average starting field position at the Cedar Ridge 44. Scoring drives of 8 seconds, 46 seconds, 11 seconds, 12 seconds and 31 seconds consumed only eight plays.

The Lions gained 184 yards in that span, compared to a Cedar Ridge offense that needed 33 first half plays to cover 67 yards. Thirty of the yards came courtesy of Lion pass interference and unsportsmanlike penalties.

Sophomore Matthew Huff scored three of his four rushing touchdowns during the first 14:32, going over from 12, 12 and 20 yards in the first half and adding a 24-yard scoring run late in the third quarter to give Jessieville a 51-0 lead. He finished the night with six carries for 71 yards. Allison Quinonez's 85-yard touchdown jaunt down the boundary concluded the scoring with 46 seconds left. He also converted seven point-after attempts.

Sophomore quarterback Carson Hair completed 3-of-4 passes for two touchdowns and 105 yards. He hit senior Joey Benson for a 49-yard score on a jet sweep toss that gave the Lions a 21-0 lead with two minutes to play in the first quarter and found Landon Daley on 49-yard run-pass option that extended the lead to 44-0 midway through the third quarter.

Jessieville scored eight touchdowns in fewer than 20 total plays. Its efficiency put it up against only one third down all night, which Daley converted on a 24-yard quarterback scramble after spelling Hair behind center in the second half.

Defensively, it recovered four of the Timberwolves' (0-1) eight fumbles and stopped Cedar Ridge behind its line of scrimmage 10 times in 52 snaps. Senior Gabe Graves' safety with 9:56 to play in the third quarter opened the second half scoring, giving the Lions a 37-0 lead. Charlie Davis had two fumble recoveries and a strip, and Joshua Witt added a sack.