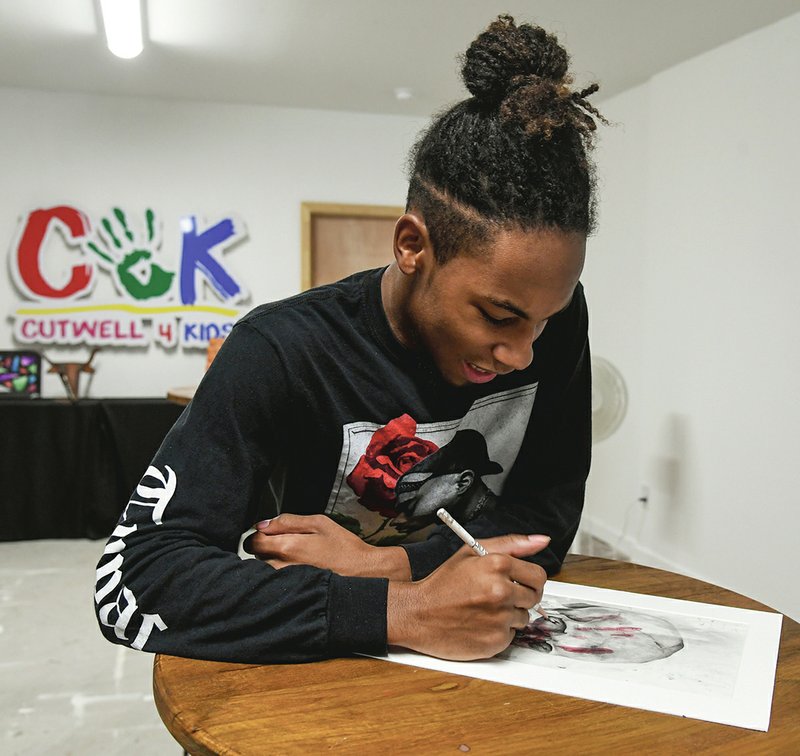 Outlets for self-expression and creativity can be found in various settings, and for certain age groups, a truly good fit can sometimes be difficult to come by. For Anthony Tidwell and the crew at Cutwell 4 Kids, the concepts of artistry and unique inspiration are celebrated and brought to life as each participant is encouraged to be a part while delving into their artistic ingenuities.

"It's a hands-on art program that we've offered for the last six years in the summertime for free that (allows) kids to come into the studio and express themselves with paint," Tidwell said.

"And here recently, we've broadened horizons with poetry and sculpture, along with painting. So, for the last six years, kids come to the studio in the summertime and they get to paint, draw, (make) poetry and papier-mâché ... that's what I use for sculpting. That's basically what it is. ... I try not to over-sophisticate anything. Just keep things simple, fun and educational."

With summer break being a time of rest and reprieve from the busy schedule of the school year, Tidwell keeps in mind that the program should stay "light, but educational" for the children participants.

In the beginning stages, Cutwell 4 Kids started out as a Saturday-only operation, but starting this year, the program has grown more accessible throughout the week allowing the kids to exercise their self-expression and creativities more often and whenever the facilities and staff are available.

"It's just over the summer, but this year, since January, we've been open," Tidwell said. "It started out as a summer program, but since January, our studio doors have been open at least one day a week. If it's me getting a phone call about somebody who wants to paint, it's a holiday or even Mother's Day ... that started during Christmas. ... We had a Christmas paint party and since that party, we've been open every week. It is mostly by appointments or people book, but Saturday is open to the public for free, and then all of the holiday activities are open to the public for free. I have some parents that call and say, 'Hey Anthony, can my kid come paint?' and it wasn't on a Saturday, but sometimes on a Sunday or a Monday. If my time allowed and I had the supplies there, I let them come and paint."

After practicing and creating art for years while growing up, Tidwell wishes to encourage and expose more of the community to visual arts and the rewards that come with it.

"It's an outlet for the kids and me," he said. "Drawing and painting helped me out a lot growing up, and I just wanted to offer the same thing. It's nothing new ... just exposing kids to the visual arts who normally, typically wouldn't get a chance to be exposed to. Now I'm reaching all the way across the board from kids who already have that in their life to kids who don't."

While most schools do offer an assortment of art classes, Cutwell 4 Kids provides a way and an outlet for the participants to continue exercising their creative skills during the summer when school is out of session.

"The schools offer it, but I'm reinforcing it," Tidwell said. "If you go to school and you play basketball or football: sports, that's cool, but what do you do in the summertime? ... Usually play on an AAU team or a summer-ball team. I feel like that's what Cutwell 4 Kids is: summertime art team. The kids may get it at school, but then what will they do in the summertime when school is out?"

Throughout its tenure promoting and aiding the community, Cutwell 4 Kids has evolved into something much greater and with purpose as the program strives to reach and teach the younger generation as they thrive in their artistic journeys.

"They inbox me on messenger, give me a phone call or a text, 'Can we come and paint?'" Tidwell said. "It's more than just an art program ... that's what a lot of people don't understand. I don't know how to get this across to people, but I really want to. I'm realizing this with some of the parents that, it's more of mentoring a lot of the kids like a big brother.

"It's different; not just a typical art program. I'm not a physiatrist (and I have) no master's degree or anything like that. ... It's just something I love to do. It's more than just an art program; kids are gravitating to the program and what has been built. It's a community center, but instead of a basketball goal, we have art."

Once he realized there was a certain need for adequate exposure to the arts in his own community, Tidwell took it upon himself to fill the void while attempting to simply "make a difference" in the lives of many.

"It was a point of interest for artists, especially in the summertime," he said. "I didn't have anyone to paint with (or) draw with, and it was a demand; a need. There was no art gallery on Silver Street and there wasn't anybody pushing the arts in my community. There was a need there and I just applied the need. ... I didn't want to be the executive director of a Cutwell 4 Kids, I just wanted to inspire the kids that if they were an artist, to be an artist and to paint. It helped me and I figured it would help the kids."

Without the benefit of funding or the ability to generate a consistent income, the livelihood of the Cutwell 4 Kids program is based solely on the talent and output of hard work by the staff and club participants.

"If we had some funding, people would hear a lot more about it," Tidwell said. "The more funding, the more we can help, but it's been doing good."

In an effort to provide the kids a public platform for showcasing their talent and hard work, Cutwell holds their annual, highly anticipated year-ending community art sale and fundraiser called "Birth of an artist."

"All summer long, the kids work on artwork then they get an opportunity to sell it," said Tidwell. "That was Saturday (Aug. 10), and it was amazing. That's something we've been doing for six years to help out with the operational costs."

This year, the event took place on the grounds of Embassy Suites, drawing over 300 people.

"It was overwhelming and the kids sold a lot of artwork," Tidwell said. "It was the biggest one yet. I had people come up and hug me just like, as a thank you, and it was so diverse. It wasn't just black, it wasn't just white; it was a mixture ... it was diverse and it was genuine. With some things, I may have dropped the ball because I'm so busy and I have to do so many different things, but in general, that was the best art show yet."

In dedication of furthering and expanding the program's outreach, the recent release of Tidwell's coloring book, "Cutwell 4 Kids, Finding Your Way With Art," represents the story of how the program was designed and created with the help of local artist Gary Simmons in an effort to encourage and produce revenue for operational costs that support the program's well-being.

"The owner of 501 Prime was doing a benefit for the children's hospital and he thought it would be cool if Cutwell 4 Kids had a coloring book," said Tidwell. "He's the one that put it in my mind (and) once he told me, I ran with it. I saw a coloring book at Levi Hospital that a friend of mine -- a well-known artist in town, Gary Simmons -- made.

"After I saw his book, I called and asked him about making one for Cutwell 4 Kids, and he said yes. We met and he just told me to tell the story ... I closed my eyes and told him the story like I'm talking to you right now. That's how the coloring book came out. I took several and donated some to (Arkansas) Children's Hospital, and they are sold at Mosaic Templars in Little Rock and at Pyramid Arts, Books and Custom Framing."