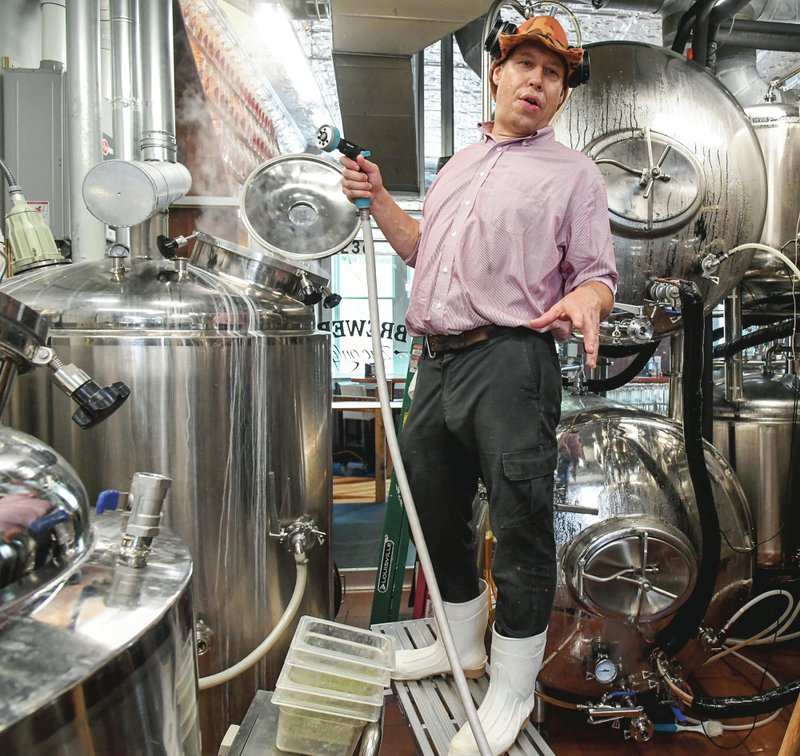 Zac Smith and Cheryl Roorda opened their pizza and brewery business, SQZBX Brewery and Pizza Joint, in December 2017, but Zac had been studying the science of making beer long before then when he started brewing in his backyard.

"I'm not trained in science, but I am a seriously curious guy, and I have always enjoyed technical jobs through my life," Zac said. "So I certainly enjoyed the precision of it (brewing beer), and the reliability of it so that if, when making your beer, if you hit your marks, if you hit your temps and your times and you've got your quantities right, you can pretty much predict what you're going to get. ... Keep it clean, and you'll have good results every time."

He said when he and Cheryl were starting SQZBX they thought including a brewery would make a nice addition.

"It's a trendy thing to do right now. There was a lot of buzz in the marketplace for that. And, you know, we just thought that it would add to the dedication of SQZBX," Zac said. "And so we just added it in I'm the brewer and the sole employee of the brewery, so I do it all around here, if there's anything wrong with it, there's only one place to complain to."

Zac has spent years perfecting his own style of brewing beer and delved into the science behind his technique.

The first step in brewing your own beer is beginning the germination process on the malt, he says.

"Malt is barley, and sometimes other grains, but 100 percent barley in my recipe, that has started germinating and has been sprouting for three days," he said. "When the raw grain starts to sprout, a bunch of enzymes are created, specifically amylase, and amylase will convert starch into sugar. So during the germination process, the kernel creates this amylase, and the amylase is released into the starch that is stored in the grain."

He said the germination process is then halted when the malt is kilned and the amylase freezes because it can't work under the temperatures to which it is brought.

Once the malt is ready, Zac said he puts it in a vat called a "mash tun" and pours water over it, preparing to make what is called the "mash." Zac said the most interesting part of the chemistry happens while making the mash.

"In the mash tun I pour water over it trying to hit a certain range of temperatures from say about ... 165 degrees Fahrenheit. And so what that does is that reactivates the amylase, the enzyme that has been created during the germination process."

He said there are two forms of amylase manipulated in the mash tun: alpha and beta.

"Alpha amylase is the same enzyme that's in your mouth. When I was a kid, I remember one of my teachers, she gave everybody saltine crackers. She said, 'I want to chew on this for five minutes, whatever you do, don't swallow.' And you're like, gross, and you start chewing and you chew and chew and you chew and it just tastes like salty mush, but after a few minutes it literally turned sweet in your mouth. And that is exactly the same process that's happened in this mash tun. The Alpha amylase is converting starch into sugars. Well, it's just cool as hell!

"So then that works up to a certain temperature and then we have number two that's called beta amylase. What beta amylase does is it creates maltose. So the alpha is creating like sucrose and maltose, but the beta amylase is only creating maltose. And so it's a longer chain of polysaccharide, or sugar, and it is less digestible for the majority of yeasts that we use in the brewery. So the balance is one of the arts of making beer, it's getting that temperature range exactly correct so that you get enough alpha amylase to create sucrose that the yeast can eat, but then you also make enough beta amylase to create maltose which will not be fermented and that will give sweetness and color to the beer."

The mash produces what is called the wart, and Zac then mashes in grain with the wart and pumps it into a boil kiln. He said wart is the liquid that put into the fermenters for the yeast to firm, and the onset of the boil is the point where he starts to cook the wart.

"Once it is here on the boil, I add hops and hops have their own acids in them. So, they are slightly acidulating. They also have oils, and these oils that are in the hops, basically they sort of first dissolve into the water because it's nice and hot, and then they isomerize, they sort of like clump up, but like the oil chains sort of latch on to each other and make longer chains. As that's happening, they're bouncing around to these proteins that also have been moved over into the wart. And so as these long, isorized oil chains are bouncing around, they're also clumping up and picking up these proteins. So these proteins are then clumping up together, along with these isorized oils, and they're going to take out some of the protein out of the wart. As they isomerize, the proteins bounce around and they sort of make these like egg noodley flakes of protein, and that drops out and will stay in the bottom of the boil kiln until the boil is finished."

He said these are proteins that he wants in the finished beer, but not a lot because protein is what makes foam. To keep too much foam from producing, he sits over the kiln with a water hose to knock down the foam if it appears to be on the verge of boiling over.

"These proteins are essentially making bubbles that are making a foam and this sort of stuff you know, further down throughout the supply chain makes foamy beer. It makes it difficult to filter, it makes it foam in the glass. ... So essentially, that's one of the things the isomerized hop oils do: help precipitate out the proteins and make for a cleaner wart as we move it down the chain."

After the boil, Smith said he conducts what is called the "knockout."

"The knockout is when I use cold water in this heat exchanger to drop the temperature dramatically by piping it over here to one of these tanks called fermenters. And then once it's aerated in the fermenter, we pitch the yeast and then clean up."

He said starting from the mash to the boil, the process takes about eight hours -- but that's just really starting the transformation of the beer. He said the next stage is the fermentation stage, which will last approximately two weeks. He said this begins with him moving his current concoction over to a "bright tank."

He added that there are different styles of fermentation with different time schedules.

"If you're making lagers your fermentation might be two weeks, and then you really want it to set around for another two to four weeks. But like for example, certain beers, like the German-style called Oktoberfest, it has to sit around for like four months, and so literally, lager is a German word for basement, basically. And so it just means like, the beers are kept in cold basements and they're just allowed to rest and and and even though it's an extremely slow process, those yeasts are actually cruising around that big tank, finding those last little bits of sugar and then suddenly nap to the bottom. And it gives a very clear, crisp-flavored beer. That is the basis for a lot of our commercial beer like Budweiser."

Smith keeps six original beers on tap at one time.

"I've got several recipes. I've got more than six recipes that I rotate through, but I keep six on tap at one time. I like to keep one that's kind of a light one. I like to keep a little bit heavier and hoppier. I keep on a wheat. I keep on a dark. And then I have two sort of play with do something seasonal."

He said for fall he will feature a wheat beer and a dark beer he already has on tap, and then he has an Oktoberfest he is currently lagering that will be ready to serve in October.