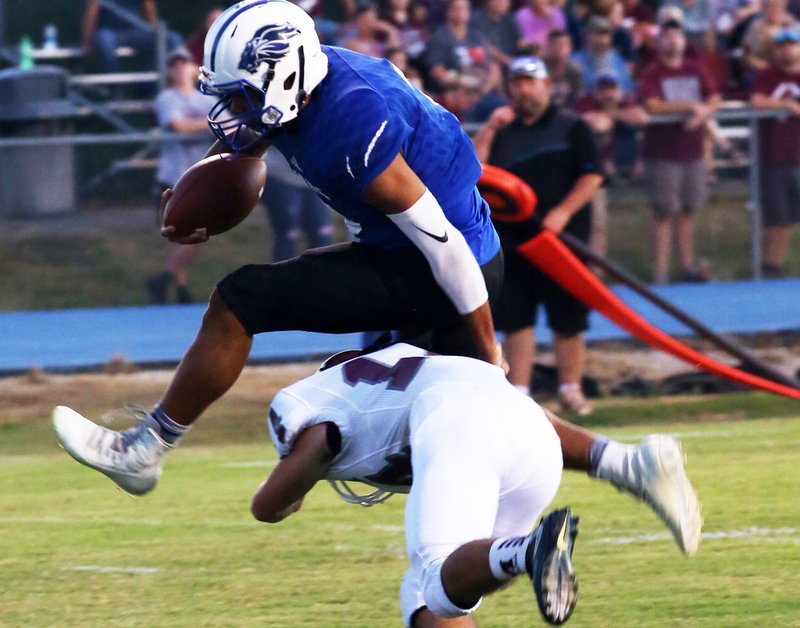 Jessieville's Matthew Huff clears a Perryville defender as he makes his way into the end zone on the initial drive for the Lions. Jessieville defeated the Mustangs 26-21. - Photo by Corbet Deary of The Sentinel-Record.

JESSIEVILLE -- Jessieville needed a little extra time to warm up, but the Lions put up 232 yards of offense in the second half to take a 26-21 win over the Perryville Mustangs Friday night at Don Phillips Field.

The Lions defense stood tall, pushing Perryville back six yards on the ensuing possession before B.J. Holloway caught the punt and moved it down to the 25. Four plays later, quarterback Carson Hair found Joseph Benson on a 12-yard pass for the end zone, but Benson was stopped on the conversion play to leave the home team up 19-14 with 4:40 left in the third frame.

After another unsuccessful drive by the Mustangs, the Lions capitalized on a 10-play, 67-yard drive as Hair ran the ball in from the eight to make it 26-14 after Allison Quinonez's kick with 10:43 left in the game.

The Mustangs were backed up on their ensuing drive before quarterback Reid Standridge hung a pass near the far sideline that Shane Hester reeled in and carried to the end zone for a 63-yard score with 10:21 left in the game. The Lions then used excellent clock management on a 19-play, 57-yard drive that burned the remainder of the time off the clock as Hair kneeled on the ball twice just outside the red zone for the win.

Perryville jumped out to the early lead as Standridge found Cole Griffin on a 30-yard pass with 1:08 off the clock in the opening quarter to take a 7-0 lead after Hayden Gottsponer's kick, but 31 seconds later, Matthew Huff ran the ball in from the five to knot the score after Quinonez's kick.

The Lions took a 13-7 lead midway through the second quarter, but the Mustangs scored with 2:41 left to take the single-point edge into the break.

Gabe Graves led the Lions defense with 10 tackles and a sack.

Standridge completed 7 of 19 passes for 213 yards and three touchdowns with Hester leading the receivers with a pair of touchdowns on two catches for 104 yards. Griffin had three receptions for 77 yards and a touchdown.

Perryville's Nathan Gilbert had 11 tackles and a sack to lead the Mustangs defense, and Seth Pitts and Brandon Hoyt added nine stops each.

Perryville will host Atkins next Friday while the Lions travel to Little Rock to face Baptist Prep.

Print Headline: Lions recover in second half, down Perryville