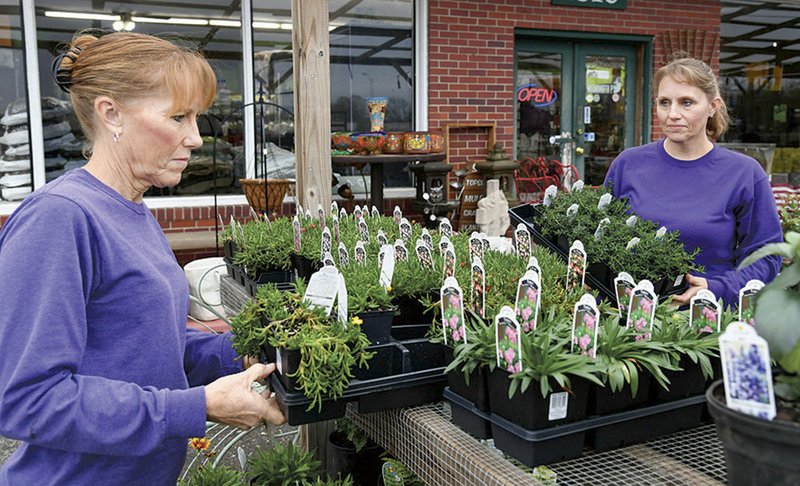 Sisters and co-owners of Hot Springs Sod &amp; Turf Sisters Vicki Young, left, and Jeanne McGuireon sort through plants at their shop on Friday, March 20 , 2020. &#x201a;&#xc4;&#xec;Photo by Grace Brown of The Sentinel-Record.

Sisters Vicki Young and Jeanne McGuire wear "all the hats" when running the heart of Hot Springs Sod and Turf, a business owned and operated by their family for more than 30 years.

"Other than running the whole operation, we do design and install landscaping," McGuire said. "We sell materials for landscaping and gardening supplies."

"We run the heart of the business," Young said. "We do the scheduling, planning."

"It's hard to flower it up with words," McGuire said.

Raised on a sod farm in Perry County, the sisters' parents, Clay and Sharron Hawkins, came to Hot Springs in 1989 to sell grass when 1810 Albert Pike Road -- now the current location of Hot Springs Sod & Turf -- was just a parking lot.

"In 1996, Jeanne and I came in and started running the business selling sod, and then we started adding all these other things to it, and about 10 years ago, we were able to come over into this building and stretch out," Young said. "So we've been here, in this lot for 31 years, this year."

"And then," McGuire said, we've had kids around the same age, so we've done a lot of things in the same timing since we've gotten older."

"With each change in life," Young said, "we've gotten closer, and when we started working together (the rest is history)."

"It takes determination," Young said, "especially in the winter months when things get a bit slow. It takes determination to keep going through the years because we have sat here during winters and actually had board games out, but not over the past several winters. We've built a year-round business, not just seasonal one out of this."

Young said their idea has been to "take care of people from the ground up."

"The supply, the install, the maintenance and just being there for (our customers) after everything, because we're not going to do things and just say 'I'm finished with you,'" she said.

Young said if you want something "bad enough," you're going to work hard for it.

"So, I wouldn't say we've even come to an end; we're still growing after 31 years," she said. "We're constantly changing here."

"Every part of it is a challenge, so with each challenge we get stronger and stronger," McGuire said.

McGuire said the sod and turf business has taught them to step out of their comfort zone and get on heavy equipment and learn how to use it with "excellence."

"We can't afford not to be that way on equipment," Young said.

"An older gentleman comes and he's (baffled) like 'You girls are going to load my stuff?'" McGuire said. "(But they're not like that) all the time. We've come way past that and people know now that we're good at it."

"And getting dirty," Young added. "If we're clean, we've been behind the desk for too long."

"And we're ladies," McGuire said. "We can be grubby, and then we also like to dress up."

McGuire said that when she was going into the sod and turf business it felt like it was an abnormal job for women.

"When we first got here it was me and Vicki and my little son, I'd bring him to work, eight hours of the day we did nothing but talk, talk to our customers and teach until they learned to trust what we had to say," she said. "And like I said earlier, they would look at women getting on that equipment and they'd go 'Don't mess up my truck.' You know what I'm saying? But we drive (equipment) with tenderness and consciousness."

McGuire said her favorite part of her job is meeting "all different kinds of people" and appreciating who they are.

"They might be totally different than us, but to appreciate that difference and loving them for it," she said.

"Those people have become endearing to us," Young said. "We truly care about them, and they do us too. That makes it even better."

"People come here and they just check out what we've got and go on, or they spend just a little time. They don't have to buy anything; they just catch up with what's going on and we like that, we welcome that," McGuire said. "They've become part of our life and our family."

Young said her favorite part of the job is seeing the change of a landscape.

"We like when somebody has nothing there and we can come in and see our vision come to reality. A situation where they trust us with it," she said. "Some things you cannot put on paper. What you see in your head that can 'be' until it is finally done."

Although they love the hands-on approach, McGuire said being the ones who "wear all the hats" proves to come with its own unique set of challenges.

The sisters said although their passion lies in landscaping, they do not have personal landscaping at their own homes.

"We can't," McGuire said. "We're here from 6:15 a.m., we leave at 5 p.m. maybe. By the time we get home it's almost dark. So basically this is our home and we're here six days a week because we love it and have a passion for it; it's not a terrible thing."

"And we do maintenance too," Young said, "so a lot of times we get to take care of what we planted. It's fun to watch that grow. We don't need to add any extra work at our house."

McGuire said that although she and Young began working together so long ago, it still seems "new."

"I don't want to do it without Jeanie," Young said.

"We pretty much know what the other is thinking all the time," McGuire said.

"We can have a meeting without even saying anything," Young said, laughing.

With the sisters' parents still working with the business, in addition to their two siblings and McGuire's son, some might say sod and turf "runs in the family," but McGuire said it's not on purpose; it just happened that way.

"I used to think it was just terrible to work in the fields (as a kid) and it's turned out to be one of my most treasured memories," McGuire said. "Because it was hard, it wasn't easy work. Mom would bring Kool-Aid and flower-shaped butter cookies for snacks."

"Every day after school we'd get off and we knew we needed to go to the field and continue helping clear -- and all summer long," Young said. "And our parents made work fun; it wasn't just work. So we all worked together and that's what helped us know how to work together now."