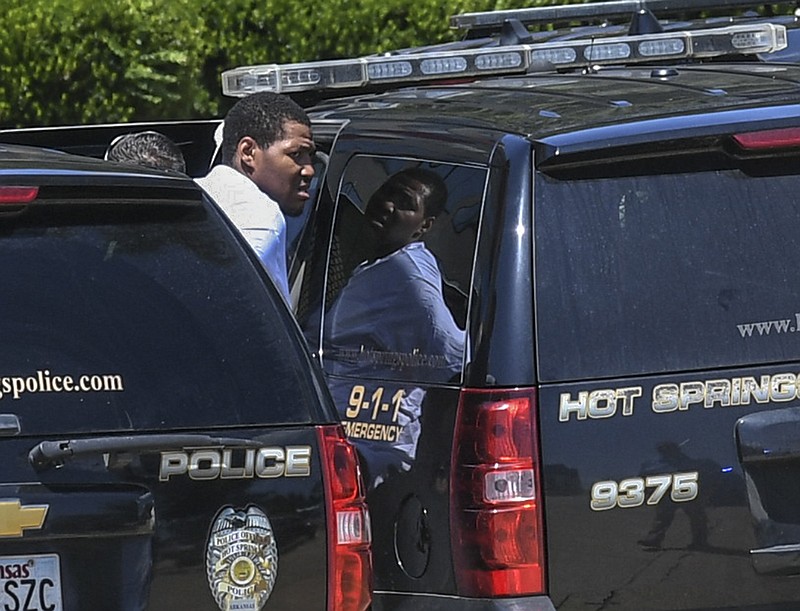 Hot Springs Police place Willie James Taylor, of Illinois, into a marked unit following a brief standoff in one of the rooms at the SunBay Resort, 4810 Central Ave., on Sunday. The fifth floor of the hotel was reportedly evacuated as a precaution at one point during the incident before Taylor surrendered. - Photo by Grace Brown of The Sentinel-Record

An Illinois man was arrested on felony and misdemeanor charges Sunday after allegedly forcing his way into his ex-girlfriend's room at a Hot Springs hotel, prompting a 30-minute standoff with Hot Springs police.

Willie James Taylor, 29, who lists an Oak Park, Ill., address, was taken into custody at SunBay Resort, 4810 Central Ave., shortly before 12:30 p.m. and charged with felony counts of third-degree domestic battery and first-degree criminal mischief, each punishable by up to six years in prison, and misdemeanor counts of criminal trespass and disorderly conduct.

Taylor was held overnight on zero bond and was set to appear Monday in Garland County District Court.

According to the probable cause affidavit, around 11:45 p.m. Sunday, police responded to SunBay regarding reports of a man with a gun. Officers spoke to one victim, who stated he was in a room on the fifth floor with a woman and her 5-year-old son when Taylor, who was not a guest of the hotel, forced his way into their room displaying a handgun in his waistband.

The man said he fled the room, notified hotel staff about the situation and hid in a bathroom in the hotel lobby.

While still talking to the man, police dispatchers received a 911 call from the room. Officers responded to the room and could hear a disturbance inside. They announced for the occupants to exit the room with their hands up, but Taylor screamed from inside that the officers "would have to kill him."

At that point, the room was occupied by Taylor, the woman and the child. It was later determined Taylor and the woman had been in a romantic relationship previously and Taylor was the father of the child.

The affidavit notes a standoff ensued for approximately 30 minutes in which Taylor, presumed to still have a gun, refused to come out. Eventually, all three came out and Taylor was taken into custody without further incident. The woman had a scratch on her right arm, but otherwise no one was injured.

A witness stated he had observed the disturbance from outside the hotel through the balcony door to the room which was open. He said his attention was drawn to the room by Taylor screaming and when he looked in the room he saw the woman grab her face and fall to the floor with Taylor standing nearby.

The witness said he saw Taylor "tearing apart" what appeared to be a computer and then throw it on the floor. The computer, valued at $1,200, was later determined to belong to the man who had been in the room. Taylor also threw a pair of sunglasses, valued at $50, belonging to the man off the balcony.

A hotel employee told police she wanted to press charges against Taylor for coming onto the property resulting in the criminal trespass charge.

Taylor was determined to have been previously convicted of felony domestic battery in Cook County, Ill., in December 2015, so the battery charge against him was filed Sunday as a felony due to the injury to the victim and his prior conviction.

The criminal mischief charge stemmed from the damages to the computer and sunglasses and the disorderly conduct charge was "for the generally hazardous circumstances created by Taylor's actions," the affidavit states.