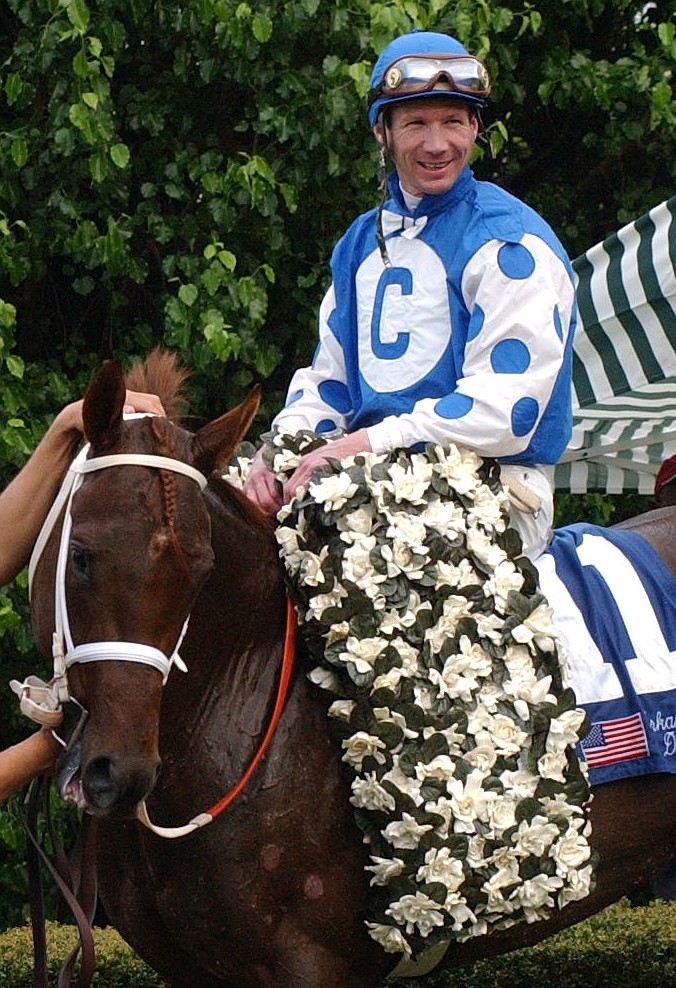 Jockey Stewart Elliott sits aboard Smarty Jones in the winners circle after winning the 68th running of the Arkansas Derby on April 10, 2004, at Oaklawn Park. Elliott is the latest jockey to reach the 5,000 win mark. - The Sentinel-Record file photo

Stewart Elliott may go down in history as the man who rode Smarty Jones, not a bad way to be remembered, but a closer look reveals a much more varied racing career.

At age 55, Elliott is the latest jockey to pilot 5,000 winners. He reached the milestone Sunday night with Power End in the eighth race at Lone Star Park in Grand Prairie, Texas.

Elliott achieved the feat for Hall of Fame trainer Steve Asmussen, for whom he has ridden more than 50 winners since hooking up this year. He is riding his first season at Lone Star after 20 victories at Oaklawn Park gave him 102 career victories in Hot Springs. Through Monday, he had 5,002 victories and his purse earnings of more than $106 million ranked 53rd in North American history, according to Equibase.

"To be honest with you, I really haven't seen him lose anything, and the experience factor is just unbelievable," said Scott Hare, his agent. "When you've been doing something for 39 years, you get pretty good at it."

Elliott's salad season proved to be 2004, one that he won the Rebel, Arkansas Derby and Kentucky Derby aboard Smarty Jones for Oaklawn's $5 million Centennial Bonus. He ranked fourth nationally in purse earnings that year and 10th nationally with 262 victories.

Unfortunately, he is saddled with riding Smarty Jones to a second-place finish in the 2004 Belmont Stakes when going for the Triple Crown. The Elusive Quality colt, trained by John Servis, led in the stretch at Belmont Park but lost by one length to longshot Birdstone. It was the colt's only defeat and came in his last of nine starts.

"I've been asked the question so many times, and even after the race you look back and say, 'Why didn't he win?'" Elliott said. "He was the best horse, but he didn't run the way he was supposed to run. He was rank."

Elliott, in an interview with Louisville website Horse Racing Nation, said Smarty Jones was in trouble that day on the first turn of the mile-and-a-half Test of the Champion. "I said, 'This isn't going to work. There is no way this horse can run a mile and a half when he's running as if he's going to go five furlongs.' He was fighting me, and there is no way a horse can go a mile and a half like that."

The decision triggered an unusual outpouring of emotion from the winners. "It was awful," said John Hendrickson, husband of Birdstone owner Marylou Whitney. "We felt horrible. We apologized for probably two years."

Still, Elliott looks back fondly on a horse that made the cover of Sports Illustrated after the Kentucky Derby. Smarty Jones' Triple Crown bid drew a record 120,139 fans to New York's Belmont Park.

Seldom does a horse change barns for a classic race like Kentucky Derby contender Max Player on Tuesday from Linda Rice to Steve Asmussen.

The Honor Ride colt ranks ninth with 90 qualifying points after back-to-back Grade 1 thirds in the Travers at Saratoga and the Belmont Stakes. Tiz the Law won both races and looms as a heavy favorite in Derby 146 on Sept. 5 at Louisville's Churchill Downs.

Rice broke the news on her Twitter feed, writing, "We are disappointed to see him go, but we wish (owner) George Hall and SportBLX the best of luck."

Max Player scored his biggest victory in the Feb. 21 Grade 3 Withers at Aqueduct. The colt was given a chance to post the first victory in a Triple Crown race by a female trainer. Rice has not saddled a horse in the Derby.

Instead, Max Player can give Asmussen his first Derby victory, two seconds and two thirds included from 20 starts. With two wins in the Preakness and one in the Belmont Stakes, he has the most starters of a nonwinning Derby trainer. Asmussen also trains fringe Derby starter Pneumatic, a two-time winner at Oaklawn.

"I think Linda Rice did a great job with this horse," Hall said in an email. "Even though Tiz the Law beat him twice, he's progressed every step of the way. He continues to improve and we're hoping he will improve even more in the Kentucky Derby."

Asmussen, he said, "has won a lot of races at Churchill Downs, and as far as I could tell he seemed to be the best fit. I talked to a lot of people and got a lot of advice."