'Work with, not against': Coach, restaurant owner offers philosophy of life 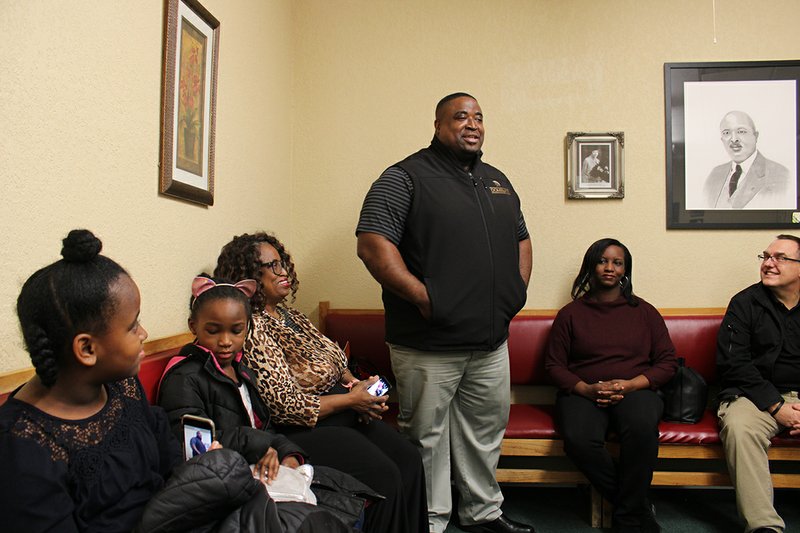 The Sentinel-Record/Tanner Newton FROM THE HEART: Hot Springs assistant football coach and local restaurant owner Courtney Sanders, center, addresses the local NAACP chapter on Saturday at the Webb Community Center. He was joined by his daughters, Courtland Sanders, left, and Layla Sanders, his mother, Teresa Hamilton, and his wife Veronica Sanders, right.

A local business owner and high school football coach recently spoke to the local chapter of the National Association for the Advancement of Colored People about his new restaurant and his philosophy of life.

Sanders thanked the members of NAACP Unit No. 6013 for inviting him to speak at Saturday's meeting at the Webb Community Center, and thanked his wife, Veronica Sanders, for being there to support him, because it was related to what he wanted to say.

"Oftentimes we wonder why things happen the way they happen. We have success, we have failures, but I've lived a life, with all the success that I've had, either I had to work with someone ... or someone had to work with me," Sanders said. "My wife does a good job working with me, we've been together since 1998 and there's been some ups and there's been some downs, but she's worked with me, and I've worked with her."

Sanders said he wanted "to speak in terms of our youth," noting, "it's easy to stereotype when their pants are sagging. It's easy to stereotype when that skirt is too short, but we need to work with them. We need to figure out why those pants are not up on your behind like they're supposed to. That kid might be wearing his older brother's pants who's locked up in jail. We don't know."

"We have to work with, not against. And when we work with each other, we'll accomplish more," he said.

Sanders also spoke about how people need to learn to talk through their differences. "A lot of y'all probably have significant others, if you're mad at him, if you're mad at her, let them know. Work with them. Y'all in the privacy of your own home, that's the time to talk about it. Not for Facebook and putting it all out there for the world to see."

Sanders said when he was given those old recipes, he didn't understand the significance of them. "Now that my grandma's dead and gone, it definitely has a significant meaning."

He said he hopes the restaurant can "be a blessing to somebody," and noted they are trying to create an environment where "people can come, relax, enjoy themselves, and leave better than what they came in."

"What that means is get there early, because when it's gone, it's gone. Don't be mad because the food is gone," Sanders said.

Print Headline: 'Work with, not against' Coach, restaurant owner offers philosophy of life