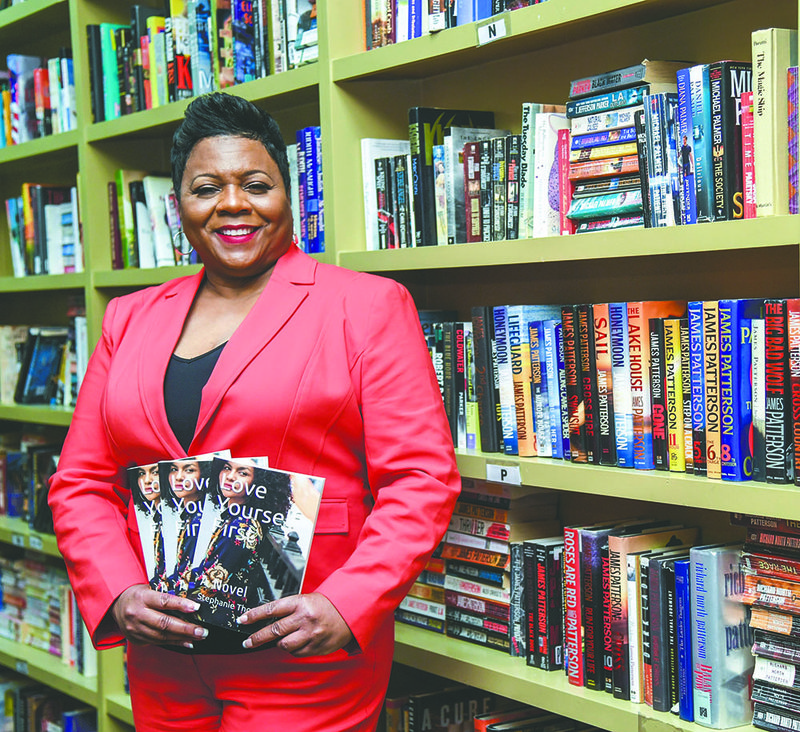 Author Stephanie Thompson with her second book in the library in the Diamondhead Community on Jan. 9, 2020. - Photo by Grace Brown of The Sentinel-Record

With her debut novel "Love Yourself First" turning one year old this month, Stephanie Thompson has continued to provide a common theme throughout her books since the release of her first work, "Down South: A Collection of Recipes from my Mother."

"It's knowing who are you are and what you bring to the table," Thompson said. "Taking care of yourself first, making your well-being a priority as you care for the ones you love. Self-care is more than bubble baths and spa visits. It's small things daily that support your mind, body, and spirit. You can't give from an empty cup."

Nothing played a more critical role in shaping Thompson's life than growing up in tiny Emerson with her mother and three siblings while accepting a myriad of responsibilities during her years at home.

"My mother was struggling with undiagnosed depression and so she would have days where she was just emotionally unavailable. ... She would work, but she was really exhausted when she got home so I did all the cooking, all the cleaning, the hair combing, the disciplining. I didn't complain because she was going through so much and I wanted to help her feel better. ... Thinking back now, I don't really know how I did it.

Upon graduation in May 1986, she made the ultimate choice to join the ranks of the Air Force, where she remained in active duty for six years.

"I felt guilty," she said, referring to her family. "I felt guilty because I had three meals a day. I knew where my food was coming from. I had heat in the winter and I was cool in the summer."

After spending a few months in the medical records department as her first enlistment, a promotion was handed to her in the form of being transferred to the command center. Thompson reenlisted when the time came and was posted overseas for the first Gulf War.

With her base on a list of those to close in 1992, she was given an option: go to Greensboro, S.C., and continue her Air Force career or begin life as a civilian.

And with that, Southern Arkansas University at Magnolia welcomed Thompson as a student where she earned a bachelor's degree in Psychology and a master's in Mental Health Counseling, inspired by her mother.

" ... Because of what we went through and how you have to navigate life once you come out of a really tough situation" she noted. "I wanted to help. I wanted to help young people and even older people who were going through depression and anxiety."

With a recognizable strong work ethic, Thompson secured a position as a supplemental instruction coordinator where she aided first-generation at-risk college students for three years and moved forward to procure a state license in order to become a mental health therapist.

However, deep down, Thompson knew she wanted to work for herself and after marrying her husband, she switched gears a decade later when the opportunity arose to be a stay-at-home mom and began working on "Down South."

"When he (my son) went to first grade, I thought 'I need to do something in my field.' Something to keep me stimulated and I started writing," she said. "The first thing I wrote was a cookbook. It wasn't as difficult as writing a novel or something like that but it was still work so I wrote a cookbook based on being in the kitchen with my mom. She was very creative and when she was at her best, you could not beat her.

"With the cookbook, in the beginning, I talked about how we don't have much and the good things that she taught us. ... That's what that's about. That even though we didn't have much, we had it difficult, we overcame and some good skills that we learned from that."

The collection features the good moments of her childhood, but Thompson knew she couldn't leave her story untold. In between the compilation and her memoir, Thompson crafted a short story titled "Unlikely Billionaire" about a girl who did not know who she was and set off on a journey to find out.

"It was such a small part," she said of "Down South." "In doing that, I said 'I wanna tell the whole story. And tell it from a place of hope.' I had never felt brave. I had never felt like I had much going for me as a young adult. When I looked back, I thought 'You were brave.' So I started to call the book 'Brave' and it's a memoir from the age of about 8 to 34, it tells my story ... I tell it raw. ... You can understand why my self-esteem is so low and they could also see how I overcame." 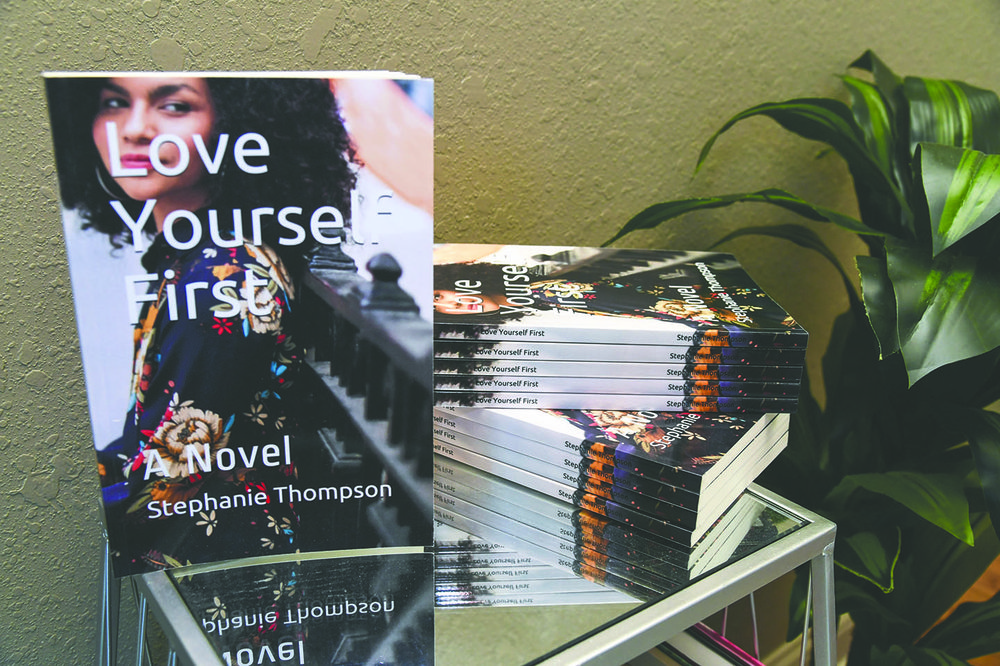 Author Stephanie Thompson's second book "Love Yourself First" in her home office on Jan. 9, 2020. - Photo by Grace Brown of The Sentinel-Record

The reception to the memoir "Brave" allowed her the opportunity to embark on a book tour where she was able to speak to others who were going through a tough period in their life.

"When I finished 'Brave,' I felt so heavy that I thought 'If you stay in that mindset, you can't see all of the good in the world if you stay stuck.' So I thought 'Let's write it from a different perspective.' I wanted to write something that was positive. Same topic, just a different way ... I think about all of the young women I came across when I was in the military, when I was just in college, who don't even know who they are even though some of them didn't come from the situation I came from but they still struggle to stand up for themselves. They struggle to make decisions for themselves versus what other people think, to know who they are.

"It's not just those of us who grow up in those situations. And there are women who wonder 'Who Am I?' And I wanted to write something about a woman who finds out."

Thompson went on to describe the plot of "Love Yourself First" and the aspects she mixed in from her own life.

Yolanda, the main character, "learns to value herself, her time, her body, her talents and her whole life turns around when she does this. ... Even though she was raised in a family and her mom gave her everything she couldn't give her, the emotional, the warmth. So that part is me. And the perfectionism -- thinking you've got to do everything just right."

With the conception the novel, Thompson has hoped to encourage others to believe in themselves.

"Inspire a person who has low self-esteem, to inspire them, to encourage them that they can do whatever they wanted to do," she said. "That's my goal. ... You can honor your time and your space and still be a generous person, a kind person. ... And to believe in yourself and help young women -- that's my niche, my target."

Loving yourself first "is not selfish. It's necessary and I think we give it a bad thing because some people just think you're thinking about yourself and being selfish. What about helping others? You cannot help others if you're overextending yourself, if you don't like yourself. Even what you do for others, it's not going to last. It's not going to be near as what you could do if you're grounded and centered and wake up in the morning and say 'I'm all right. I'm OK just like I am.' And then you can give and whoever you give to will benefit more."

Thompson also mentioned how she views writing as a spiritual practice.

"I really do because I learned more each time. I learned more about me, about life, connections in my life that I have not have known or that about if I had not been writing about it. It clarifies things."

Visit thompson26.com to connect with Stephanie as she plans for her next book to arrive in the spring of 2021.