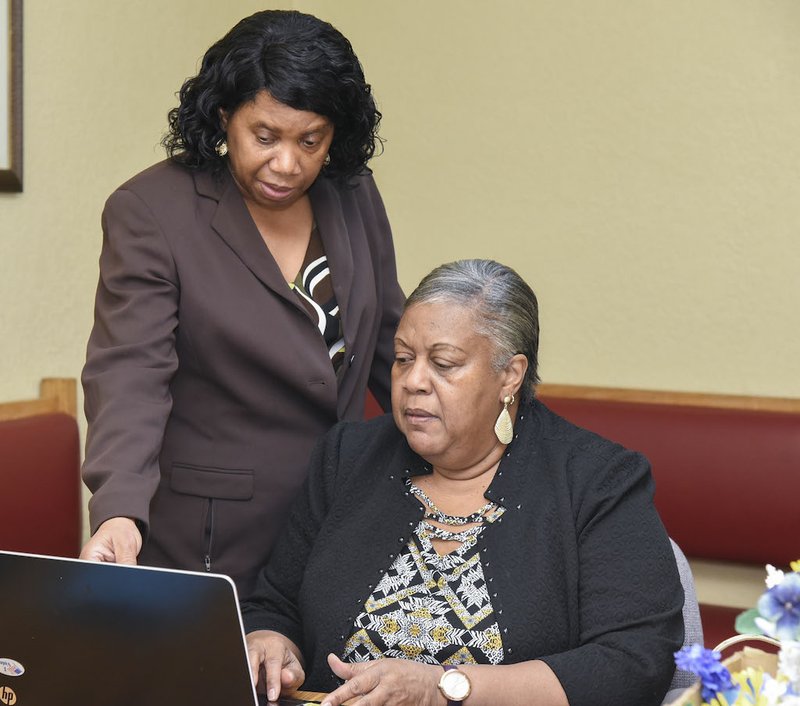 President of the NAACP, Linda Franklin, left, works on the programs for the 2020 MLK Prayer Breakfast at the Webb Community Center on January 15. -photo by Grace Brown of the Sentinel-Record

"Most people, I think, come (to the NAACP) when they are actually in a crisis themselves, and then they come and ask for help, and when they get help you go 'Oh OK, maybe I should be a part of this,'" says Linda Franklin, the president of the National Association for the Advancement of Colored People Unit 6013.

Franklin has been an active member of the NAACP Unit 6013 since 2000, eventually taking on a leadership role as the unit's secretary before becoming its president in 2009. She describes her participation within the unit as completing a "civic duty."

According to the NAACP, the association's mission is to secure the political, educational, social and economic equality of rights in order to eliminate race-based discrimination and ensure the health and well-being of all persons. Its vision is to ensure a society in which all individuals have equal rights without discrimination based on race.

"Sometimes we are asked to come in on a legal matter and we're not lawyers, we don't even have a lawyer, but we can actually sit down with somebody a lot of times and solve the problem," Franklin said. "A lot of people say 'What's the NAACP and what are y'all out doing? The NAACP does nothing.' But because of the fact that most of the things that we're dealing with are private, we have to be confidential, and we can't actually say 'I just went there and solved this case, somebody had a problem on the job.'"

She said the problem could be in discrimination, but it could also be in something like sexual harassment at the workplace.

"We just try to go in and talk with the people," she said. "And the good thing about our city is we have a working relationship with the mayor, city director, chief of police and the sheriff. So if those matters come up we can sit down and solve them without a whole lot of litigation."

"They don't know about the educational part; if you're having problems with your kids in school," she said. "We (also) get letters from people in jail cells saying 'I've been unfairly treated,' and a lot of times it comes from black people because I don't think a lot of people know it's for everybody."

Franklin is on the long, mixed list of past NAACP presidents that consists of both men and women, as well as white and black, people.

Franklin said it is not even the slightest bit uncommon for women to hold the role of president in any NAACP unit, or to lead in any area of the black community, for that matter.

"It is common for the NAACP to have women in leadership roles. (In) most black organizations, even churches, when you go into them, the majority of the members are females," she said. "Sometimes you have to realize maybe (women) can lead; we don't always have to be the followers."

Franklin said she had never seen herself as a leader of any organization, prior to taking on her current role, but the NAACP has encouraged her in her leadership.

"I like to work and I like to work in the background," she said. "But when I was called forward I thought 'Am I really for this? Will I be successful at it?' And a lot of times I doubt myself and I get the encouragement from the unit to say 'Yeah, you're doing a good job, go ahead and do it.'

Of all the leaders who sparked a change in black history, Franklin said Harriet Tubman is one who comes to mind as a strong female role model.

Tubman was an escaped slave in America who practiced abolitionism -- carrying out multiple rescue missions to free slaves -- and political activism as a women's suffragist in the 1800s.

"(Harriet Tubman) got to the point where she wanted to be free, and she said I'm going to be free or else I'll die trying," Franklin said. "She wasn't going to willingly give up her freedom. So she actually became a leader because she went back and got more people and brought more people. So it's just people like that who are motivated and have that gut feeling that this is not right, and I have to be the one if no one else is going to do something about it."

She noted that although the black community has come "a long way" since Harriett Tubman's efforts, there is still a "ways to go."

"It's important to have (black female leaders in the community) just so the generation that follows us knows there are some support systems for them. ... One generation learns from the other. Her generation "had strong role models," she said, and "I want to start with being an example to the next generation as a role model so that when I'm gone someone is there and trained to take my place, and so for the next generation they must also learn that they are also obligated to bring up that next generation." 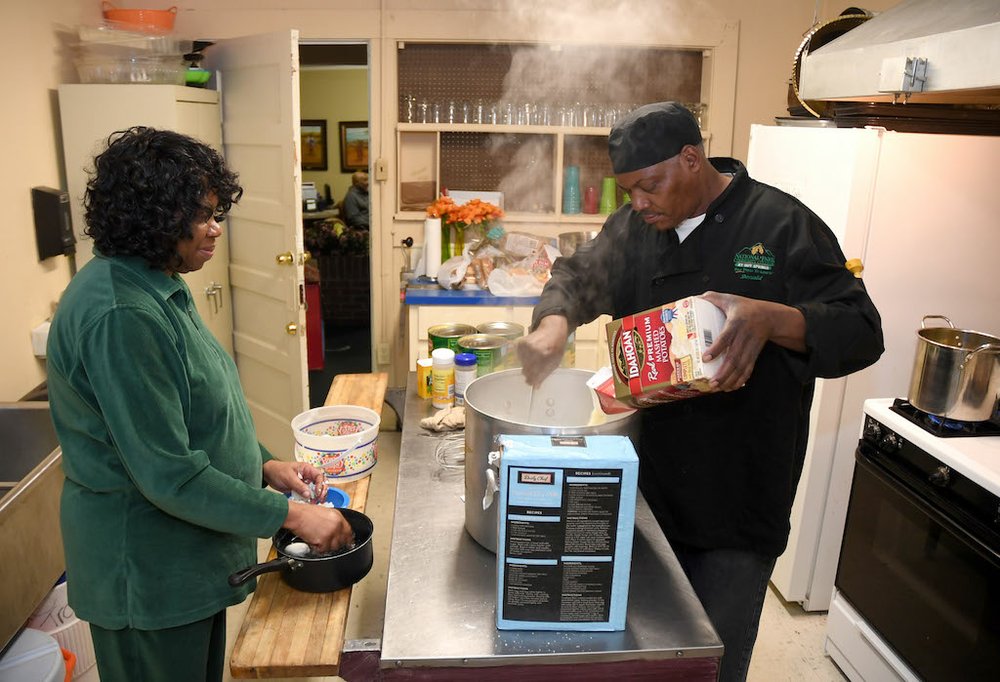 Linda Franklin and Donald Giles prepare food at the Webb Community Center for a Christmas Eve dinner in 2016. - File photo by The Sentinel-Record

In addition to her own determination, it also took many role models in Franklin's childhood in order for her to eventually end up completing 25 years as an educator at National Park College.

"My mom, she was a go-getter, so I guess I inherited some of that from her. I have a lot of female role models who I look up to, and I model after them," she said. "I have an aunt whose a prayer warrior and she prays and gives me a lot of encouragement in a way."

Franklin said when she decided she wanted to become a teacher, it was her seventh-grade math teacher at Langston Junior High, Marva Gant, who inspired her.

"(Mrs. Gant) was phenomenal. She saw something in me and encouraged me and I guess the more successful I became I loved math, so she was one of my first role models," she said. "Family members (were my role models) mostly, but then when I got into Langston Junior High. ... We had many of the teachers who became role models. We saw professional black women doing things and they encouraged us, so that also helped me along the way."

Franklin said that growing up she was probably a "statistic who wasn't doomed for success," being raised in project housing on Potter Street.

"Most people have the stereotype if they're raised in the projects they aren't ever going to get out of the projects; it takes motivation, I guess," she said. "I was always motivated. I didn't fight a whole lot as a child ... I guess I went along with a lot of things because I was considered to be a little quiet girl."

Franklin eventually paved her own way to college by acquiring scholarships.

"So I want to say to those people who think they're in a situation and can't get out of it, it just takes determination and you can rise above your situation," she said. "Don't let your current circumstance determine your final destination because we all can get out of it if we have the desire to do better."

Franklin said the necessity of a strong role model for the younger black generation who will face similar unique challenges as a person of color is a cycle that never stops.

"We have to continue to educate our children and role models in our community are the best way to solve that problem. ... It never stops," Franklin said. "I bring my grandchildren to the meetings sometimes with me because I want them to see the struggle; you have to see the struggle. Everything is not as easy as they may think it is."

Being a black female leader herself, she said it's her eight grandchildren's futures that motivates her.

"I know I can't give up because if I become a quitter then they may not want to get started," Franklin said. "The state of the world is at such a point that somebody has to make a move. I never want to get so complacent that I feel like that doesn't affect me because if it affects one person it affects the next person." 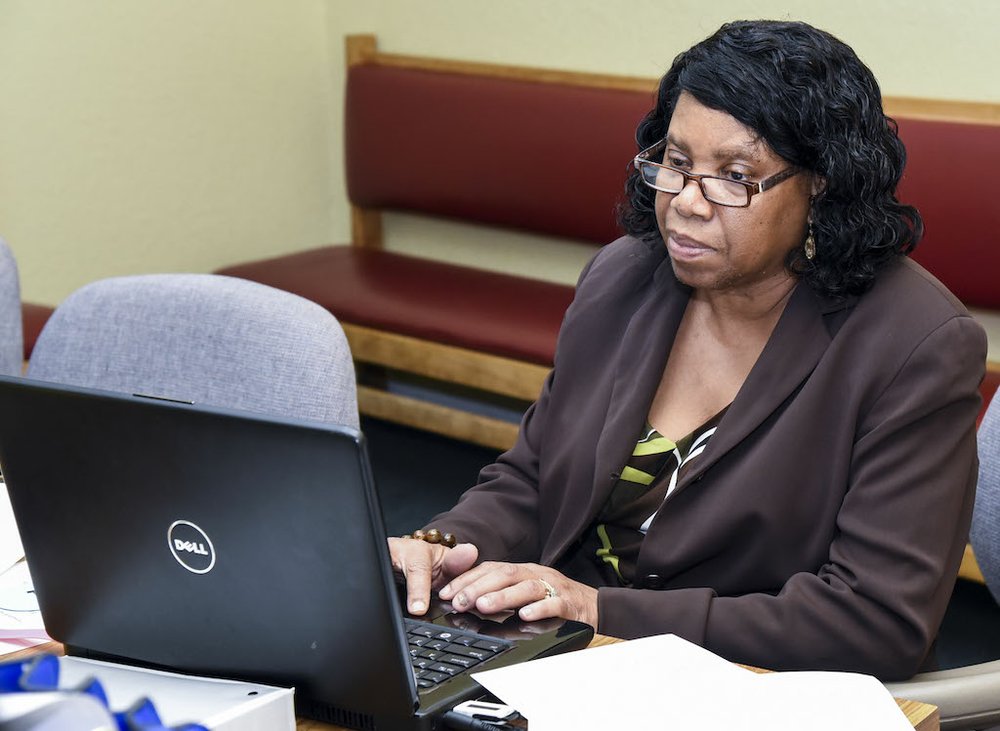 NAACP President Linda Franklin works on the seating charts for the 2020 MLK Prayer Breakfast at the Webb Community Center on Jan. 15, 2020. - Photo by Grace Brown of the Sentinel-Record