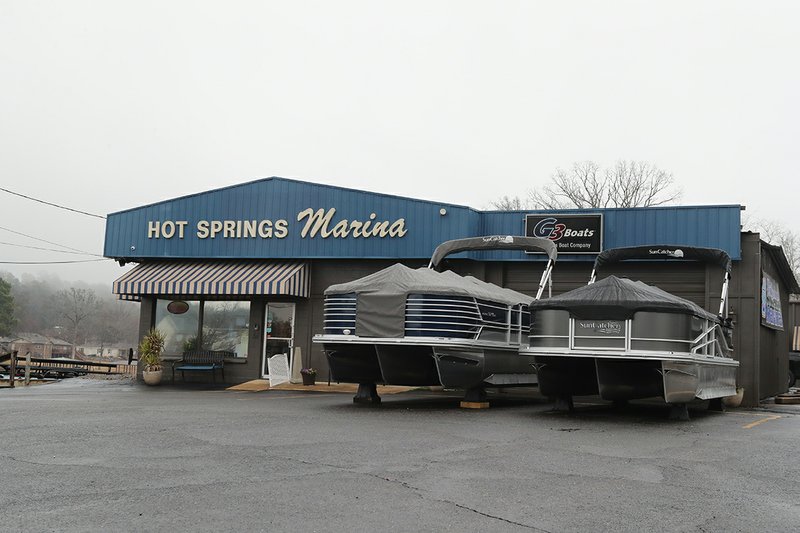 The new owner of Hot Springs Marina officially took the reins Thursday. The business has operated under numerous names and owners since opening more than 60 years ago. - Photo by Richard Rasmussen of The Sentinel-Record

A Lake Hamilton marina that's been in operation for more than 60 years has changed ownership, the new owner confirmed Thursday.

Gabe Galster said his proprietorship of Hot Springs Marina officially began Thursday. The deed conveying the 301 Lakeland Drive location was recorded Tuesday. According to property records, the Leggett family was the previous owner, acquiring the marina in 2008.

Nestled in the west cove of the Hot Springs Creek basin, the location is billed as the oldest operating marina on Lake Hamilton. Galster said it opened in 1955. It has done business under numerous names and owners during that time.

Galster said he frequented the marina during visits to Hot Springs as a youth.

"My great grandparents had a lake house here," he said. "It was like a second home for me on weekends. I used to ride my bicycle to the marina and buy candy. Now it's come full circle. The stars aligned, and we decided to take the plunge."

Galster moved to Hot Springs from Pine Bluff six years ago. His family owns New Hope Prosthetics and Orthotics. The designer and fitter of prosthetic devices has seven clinics in Arkansas, Galster said, including one on Higdon Ferry Road.

Galster said he's not new to boating, having operated an offshore vessel in Louisiana as a licensed U.S. Coast Guard captain. Owning a marina seemed like a natural progression, he said.

He'll have time to get acclimated, taking over the business during a lull in the boating calendar. Galster said lake traffic slows considerably after August. Servicing and winterizing of boats winds down in November, he said, and February signals the start of the boat buying season. Galster said 2020 models will be arriving soon.

In addition to selling and renting watercraft, the marina also services them.

"We have the largest service center on the lake with three marine techs," he said. "It's a pretty diverse operation. That's one of the things that appealed to me."

According to real estate records, the property was acquired for $2 million.