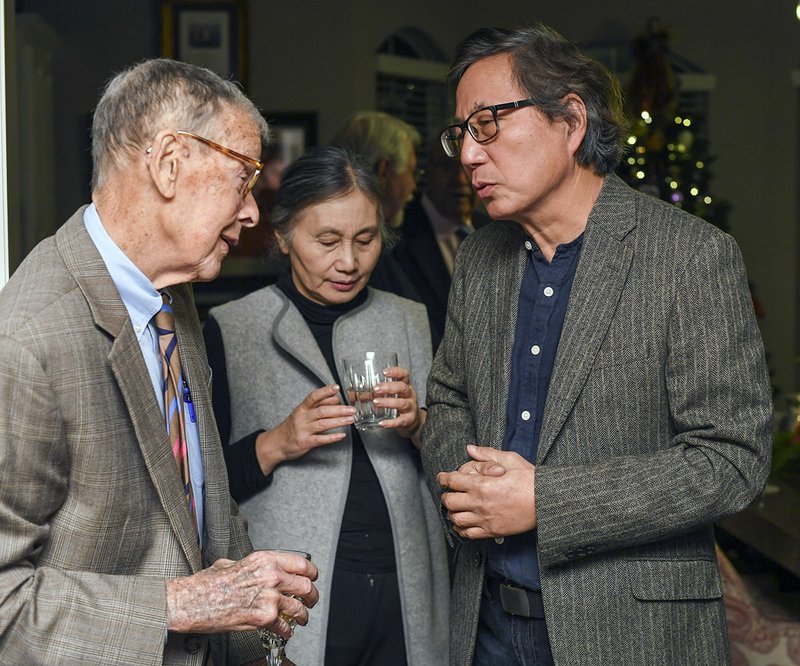 Don Munro, left, speaks with artist Longhua Xu, right, and his wife Shunying Chen during a fundraising party for "The Explorer" sculpture Xu will complete for the Gateway Project at the home of local philanthropist Dorothy Morris on Thursday. - Photo by Grace Brown of The Sentinel-Record

Twenty-seven years after artist Longhua Xu was commissioned to create "Mother Nature," one of the most-recognized sculptures in Hot Springs, fundraising is nearly complete for what supporters say will be another iconic, "first class" work of art.

"This is going to be first-class. Longhua is an international sculptor, very popular in China and we are lucky to have him," local philanthropist Dorothy Morris said Thursday.

"He goes all over the world making sculptures. I love promoting him and I think it's exciting to have that in downtown Hot Springs. The art brings so much to the town," she said.

"We're naming it 'The Explorer' because there's a lot of question about (if) Hernando de Soto was here so we just thought that would solve everything, you know," Morris said.

The 12-foot bronze sculpture, depicting an early visitor to Hot Springs mounted on horseback, will rest at the intersection of Bridge Street, Malvern Avenue, and Broadway Street, as part of the Gateway Project. Although the installation will still take years to complete, Xu's project has already drummed up large amounts of support from the community. As of Thursday, the fundraising committee raised around $220,000, just about $30,000 shy of the goal.

"So we think we're about 85% of the way there. So this is going to happen. It's not a matter of if but when. ... I would anticipate we'll have that done in the next 45 days," Don Gooch said Thursday. "I really am confident we can do that."

The depiction of an explorer stood out to Xu, who believes all who travel to Hot Springs are explorers in a sense. He said he also hopes that displaying a part of Hot Springs' rich culture will inspire visitors to take an active role in learning about the town's history. So far, Xu has completed two small-scale models of the sculpture.

"I feel so honored to do this sculpture. All artists have kind of ego and want to leave their mark on history but this is my hometown. I consider this my second home. I live in Shanghai for 35 but really my adult life, I've been living in Hot Springs," Xu said.

"I feel so honored to work with everybody to support and do this sculpture because this is for the city of Hot Springs, for everybody to enjoy. We are a very unique town. ... We need more stuff for people to enjoy, to see. To see what we have to offer in this town," he said.

Xu is a 30-year resident of Hot Springs, having settled here after emigrating from China following the country's Great Cultural Revolution, according to Visit Hot Springs. During his time in the United States, Xu has been recognized internationally for his work and received the accolade of "Arkansas Living Treasure" in 2019. Several of his works have gone on to be designated national treasures and cataloged in the Smithsonian Institution Catalogue of Great Public Works.

"It's just powerful to me to feel that we have someone of his caliber in our community that can create something like that," Gooch said. "I think it's about life and exploring the future. I mean, we celebrate the past but this sculpture is aimed at pointing at the future and taking us to places we've never been before and to celebrate all that's good about Hot Springs and creating new things that are good."