Today's Paper Obits Mugshots Sports Classifieds Jobs HER Magazine Crime Contact us Subscribe to our newsletters Activate
ADVERTISEMENT
WATCH: Crafting a Masterpiece one Dress at a Time by Cassidy Kendall HER Magazine | January 15, 2020 at 2:00 p.m. 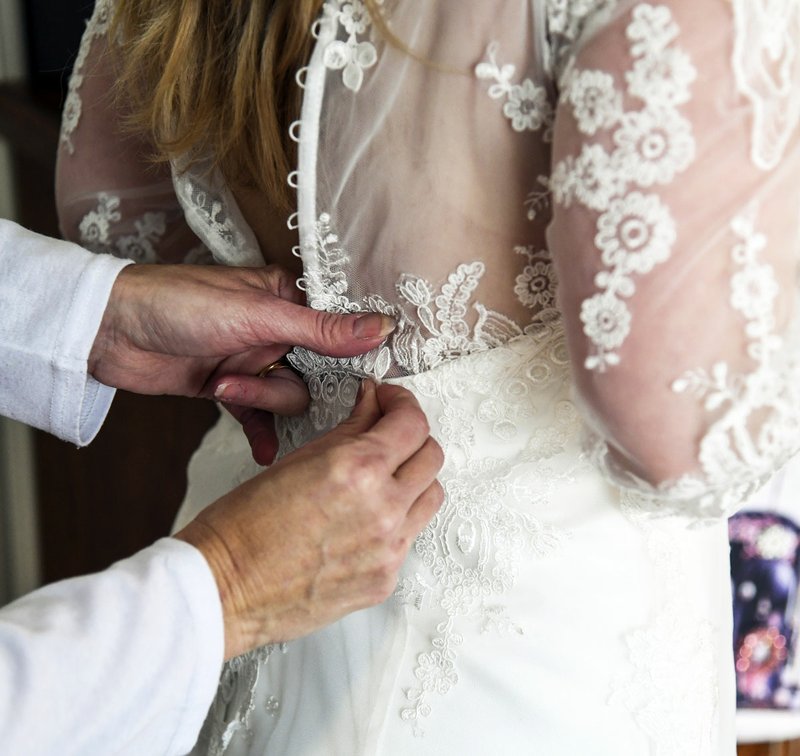 Local seamstress Sheila Huddleston lives a lifestyle appreciating the value in her craft, rather than price, when it comes to both her closet and her customers' closets.

Working under the name "Bride Ideas," Huddleston and her daughter, Marti Kaye Conrad, are personal seamstresses for many locals' formal wear needs.

"If someone comes in here with a wedding dress that they got from someone and they pay $30, we celebrate that," Huddleston said. " ... If you bring me your cousin's dress that she sent you and it was free, that may mean the world to you, and then someone else brings a dress in they paid $3,000 or $4,000 for, well, of course, that means the world to them -- or their mom.

"But those two dresses have the same value to us because you love it and we're going to make it awesome for you. So if they get one inexpensive, they get one cheap, they get one given to them, we're like, 'Heck yeah!' We can do anything because they can have it how they want it, save a bunch of money, and then they can spend it on something else. We love it when they get something cheap."

Huddleston said she enjoys sewing because it allows her to take a piece of clothing and make it anyway she wants to.

"What I like about sewing for other people is when they come in and the dress is just wrong -- it doesn't fit -- and then making it where they can look straight ahead and walk without their dress tripping them," she said. " ... Like you have six layers of unpressed fabric, then we take it and we press all that and we tack it all together so that anyone could walk up behind her and fluff her dress so it's perfect all the time."

Huddleston said after she "fixes" a dress it can be worn all day.

Conrad describes her mom as a "real professional."

"She puts a piece of herself into every job she touches, and that's what makes her the queen of it," Conrad said. "You should see her light up, like the energy she puts out whenever a new customer comes in, like oh my gosh, it might be the best thing ever."

"I don't know about that," Huddleston said, laughing, "but we ask them what their vision is and I write it down, so I'll remember. Like where's your wedding going to be? What colors are you doing? And I just get them talking and that kind of gives me an idea of what their style is. Is your style dungeons and dragons? Is your style country? Elegant? What are you trying to do? And then we go with that."

She said she was doing a bustle for a customer one time and found out the customer and her dad were doing a special dance at the ceremony.

"We had to change what we were doing to accommodate that, I needed to know that," Huddleston said. "So that was a goal: I wanted it to be where she can do her dance with her dad and still be comfortable in her dress, and not have to change."

Huddleston said she looks at every job as an opportunity to make their occasion better so they have a good wedding experience.

"They had an idea when they saw that dress what they wanted to look like wearing it, and that's our goal," she said. "People bring us drawings of stuff and they're like 'I want this and I want it in blue' and I'm like 'OK, that's fine, then we're going to do it.' It's whatever their image is ... We're going to go for that. Whether we have to manufacture stuff or add stuff to her dress, we'll cut off anything, we'll do anything."

"Everything else might go awry, but their dress will stay up all day long," Conrad said.

Huddleston said the dress someone wears to an event is significant.

"It is," Huddleston said. "I think it's significant everywhere you go. ... Every event, I don't care what it is, I stand in my closet and think 'what do I want this to go like.'"

Huddleston said she has always been a "crafter."

"My mom was a crafter, and there was nothing she couldn't do, so I figure I just got resourcefulness passed on to me," she said. "And she (Conrad) is just like me, too. She resisted, but now at 25 she's just finally accepted what she is. She's always sewn for herself, too."

Huddleston said you can have a lot more clothing you like when you make it rather than buy it.

"If you buy it (material) super cheap at a thrift store you might get 5 yards for a couple of dollars and you can have a whole lot more. ... We buy our flannel shirts at thrift stores for like a dollar," Huddleston said. "And then I paint stuff on the back of it ... I put studs and stuff on them and you can't have eight flannel shirts if you're paying $30 a shirt, but you can have eight of them if you're paying a dollar. And then all my friends have them, I make them for everybody."

Huddleston describes restoring "thrifted" clothes as something similar to a sport.

"I see guys who take a car and tear it all the way down and they take it home and it's a rust pile and I said one night 'Why would you take that home knowing how much work that is?' (My husband) said 'Why would you tear up everything you buy and remake it?' and I said 'OK, that's all, I understand now,'" Huddleston said.

Aside from being a seamstress, Huddleston is also known for customizing T-shirts.

"My husband is in a band, and when we got together I did not have a very good budget for buying things, so if we went to a bike rally he'd buy us matching T-shirts," she said. "Well I don't wear plain T-shirts because I don't, so I would like butcher them up and make them awesome and so that kind of really got me going."

Whether they are concert, bar or event shirts, Huddleston said she always makes them "strappy," halter or backless, while adding chains and stones.

"So when we thrift shop, we just look for something with potential," she said. "I do everything from making pillow covers from curtains and curtains from prom dresses."

Print Headline: Crafting a Masterpiece one Dress at a Time