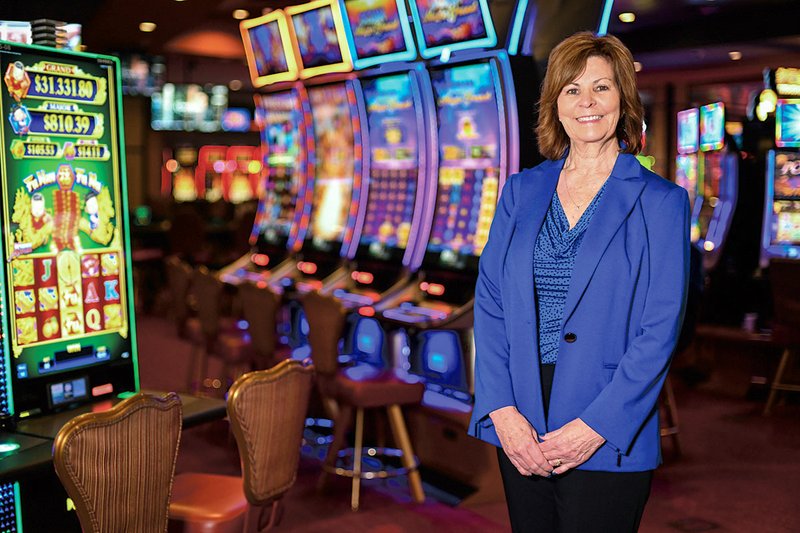 Patti Pendleton, head of Oaklawn Racing Casino Resort’s security division, has her photo taken on the casino floor. –Photo by Grace Brown of the Sentinel-Record

After 30 years on the Memphis, Tenn., police force and four years with the U.S. Marshals Service, Patti Pendleton continues to serve and protect the public as head of Oaklawn Racing Casino Resort's security division.

"I have 35 years in law enforcement," she said. "I started out of Memphis, Tenn. I was in a program right out of high school -- a cadet program. ... We worked every department and they sent us to college, and then we had a program (where we) then became commissioned," Pendleton said.

"From there, I had a million different jobs with the police department (for) over 29 years. I was in communications, I was in child abuse (and) sexual abuse, I was in document squad, I did some crime analysis. ... Just tons of jobs (and) tons of training -- everything you can think of," she said.

When the time came, Pendleton and her husband began searching for a new location to retire to before soon fulfilling their respective career tenures, and after spending some time on idyllic Lake Ouachita and Hot Springs National Park, it wasn't long before the pair decided that the city of Hot Springs would soon become home.

"For years and years, we had come over here to camp on Lake Ouachita and our very best friends -- a nurse and another police officer that we worked with in Memphis -- had plans to come here and retire; she was from here," Pendleton said. "So we learned about Hot Springs from them, camped and loved the lakes, and (we) decided to buy a lot on the lake to build our house before we retired. When we retired, we did it," she said.

For various reasons, Pendleton soon found herself looking to return to the workforce, and because of her vast knowledge in the field of criminal justice, she soon found a good fit that would put her extensive skills to good use.

Going on five years as a security employee at Oaklawn, Pendleton has continued to climb the ranks of her department as she has worked her way toward a notable level of degree, leadership and responsibility.

Her responsibilities encompass a myriad of tasks, but the unique opportunity and ability to connect with people is what she admires and treasures most about the work she does.

"I love working. I love working with people. ... It's so interesting. (And) being a woman I think, was just a bonus. This company really does respect and have a lot of women at very high positions, so I'm just thrilled to death that they were smart enough to get somebody like me," she said with a laugh.

As a woman leading security detail in the midst of a casino environment, Pendleton feels her ample experience and criminal justice background provides her with the insight needed to perform her job effectively.

Firsthand training in the field combined with years of acquired knowledge has helped hone Pendleton's skills in analyzing circumstantial situations while also being able to better understand the parties involved.

"It is a fabulous opportunity," Pendleton said. "I think my qualifications are far and above ... I can't imagine them wanting anything else with the background that I've got that has prepared me for this job. ... With my background and all the training I've had, I don't really get any flak (as a woman)," she said.

"When I'm dealing with somebody ... I don't leave room for any disputes or any craziness because I don't know, you just learn how to deal with all these different people. ... I think I've brought so much to this table," she added. "For one thing, Memphis had the best training in the country (at) our academy. We had programs that started in Memphis; our CIT for one, which deals with mentally ill people. ... When you've had that training, you can kind of see people are not quite right or they may be acting a certain way for a totally different reason than what you think, so bringing that here and making my guards aware (that) everything is not always what it seems.

"That's something you can't learn unless you have been out on the streets for 10 years diddling with everything. And then the crime part of it, I mean I have had every kind of call you can imagine; I've seen everything you can imagine, so robberies, burglaries, rapes, thefts ... I've been an investigator so I know how to talk with people. If we have issues here, of course, we have cameras (which are) wonderful (in) not having much of a discussion with someone ... so that makes it really easy, but you can talk with people and I talked to every spectrum level of people to be able to do that professionally (and) with respect. They're still guests, this is still customer service (and) we're still a casino, and we want to keep people safe, but we also want to treat people well, even if they're having to be booted," she said.

Since a long line of related police officers paved the way for Pendleton, she encourages others who own the same dream of pursuing a career in law enforcement to not only embrace the challenge but to also fully comprehend what's being asked of an individual going into this line of work.

"My family was all police. My dad was a police chief, his uncle (and) my great-grandfather were police so it was kind of something I just always thought was it," she said. "But for someone who sees it and thinks that's what they want to do, they need to first get educated on the law and criminal justice. You need that background; you need to know the business before you decide, 'I just want to be a cop; it looks like fun.' You've got to really get your base background and then there is nothing that can hold a woman back," she said.

"Prepare yourself, take every opportunity to train every bit you can, get your education and nothing can stop you. We have some great Hot Springs officers (and) women officers that work here; they're just awesome and going on up in the ranks. They need to," she said.

Pendleton admitted some advantages that can accompany being a woman on the job.

"Sometimes when I'm on a call with a man, (as a) woman, (you) just have a different perspective. It just helps and kind of kiddingly, you get away with a little more than a guy. You can say something to somebody a little different because just naturally, you can. ... We're moms, we know how to treat children and most of the time when someone's misbehaving, they're acting like a child so I would tell someone just to go for it (and to) just go as far as you want to go," she said.

Pendleton recognizes the growing demand for strategic, reliable security at Oaklawn, along with the implementation of guest care and customer service.

"It's growing more and more so we have more and more demands. ... The more tables we get with this new expansion, the more demands we have. Then, of course, (it's) very important we don't want underages in here and we're very, very careful. I've always been in service since high school so I feel like I'm doing a service to our guests (in keeping them) safe."

In an effort to continue serving others while keeping the peace among many, Pendleton looks to keep giving back as she uses her diverse experiences and the passion she carried for the work she devoted her life to, to securely carrying out the mission set before her.

"My last 10 years were in uniform patrol which was my most favorite job. I was a field lieutenant in uniform patrol, so (in) that experience, I responded to everything across the board. I loved it, and it was just 'always something different.' And you learn how to read people; you're observant. ... All of that together prepared me for this job. The skills that I got from 29 years with the police just work out perfectly here. The culture here at Oaklawn is just, it's fabulous."