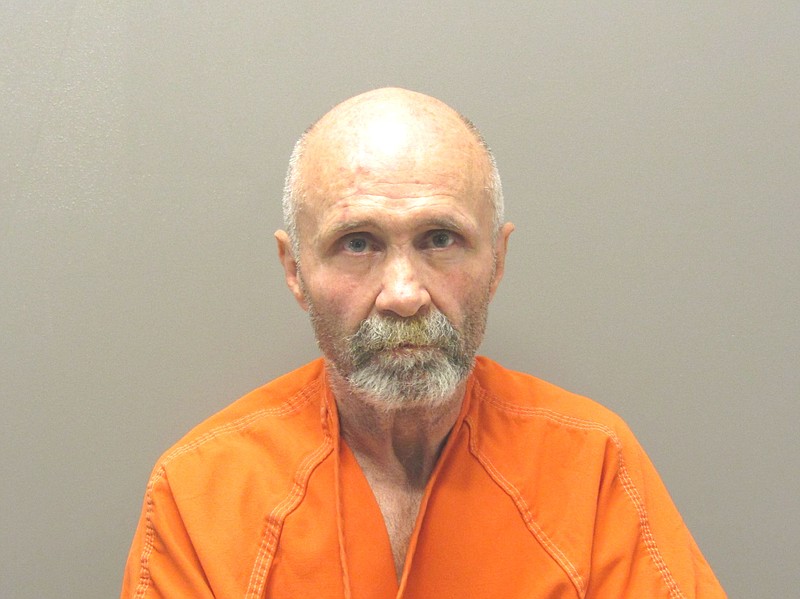 A Pine Ridge man accused of first-degree murder in the 2019 death of a Montgomery County man who was reportedly stabbed at least 16 times was found fit to proceed with trial following a mental evaluation hearing Monday.

Keith Edward Ashlock, 59, who has remained in custody on $200,000 bond since his arrest April 30, 2019, is charged with first-degree murder, punishable by up to life in prison, along with additional felony and misdemeanor charges of first-degree criminal mischief, fleeing in a vehicle and on foot, and obstructing government operations all stemming from his pursuit by Garland County sheriff's deputies who later found the body of the victim, Jimmy Fryar, 65, in the trunk of Ashlock's car.

Ashlock pleaded not guilty to all the charges July 1, 2019, in Garland County Circuit Court and on Feb. 26, his attorney, Clay Janske, filed a motion for a mental evaluation noting he intended to put into issue Ashlock's fitness to proceed and the defense of mental disease or defect at the time of the crime.

On Monday, Ashlock was found fit to proceed based on the findings of the evaluation by the Arkansas State Hospital and a hearing to determine the admissibility of any statements he made to sheriff's deputies is now set for July 27.

Prosecutors filed a motion Monday to amend the charges against Ashlock and classify him as a habitual offender with eight prior felony convictions, including in 1983 in Ventura County, Calif., for lewd and lascivious acts and soliciting a lewd act; in 1990 in Fresno County, Calif., for driving under the influence with three prior offenses; in 1999 in Ventura County for battery with serious injury; in 2008 in Garland County for possession of crack cocaine; in 2010 in Garland County for first-degree criminal mischief and residential burglary; and in 2014 in Pulaski County for residential burglary.

According to the probable cause affidavits, on April 30, 2019, shortly after 3:30 a.m., Deputy Aaron Bowerman attempted a traffic stop on a Cadillac with a vanity plate in place of an authorized license plate, but the vehicle quickly turned into Hamilton Pointe Condos, 5000 Central Ave., crashing through the metal gate at the entrance. The vehicle continued through the condominium area until coming to a stop on the front lawn at the dead-end of the street.

Bowerman discovered the driver, later identified as Ashlock, had fled and left the car with the engine running. A Hot Springs police K-9 was brought in and located Ashlock hiding behind a chimney on the upstairs deck of one of the condos.

He initially refused to come down, so deputies called first responders to bring them a ladder and were finally able to get him off the roof after about two hours. Damage to the gate and a condo skylight were estimated at $11,000.

During an inventory of the vehicle prior to towing, deputies discovered the body of Fryar under a tarp in the trunk. It was noted the victim had "what appeared to be a puncture wound to the back of the neck at the base of the skull."

There was reportedly a large amount of blood on the body and in the trunk. Garland County Coroner Stuart Smedley removed the victim's wallet and found an ID card with the name Jimmy Fryar and a photo that matched the victim.

At the detention center, Ashlock initially gave a false name, but eventually admitted his true identity, the affidavit states, before demanding an attorney so no further questions were asked.

Fryar's daughter told investigators later that day she had not seen her father in about two weeks but believed he was staying with "a buddy of his" in the Pine Ridge area in Montgomery County. She only knew the friend as "Peak or some similar name." A check of Ashlock's criminal history revealed numerous aliases including one listed as "Keat" or "Keit."

Preliminary findings from the autopsy of Fryar on May 2, 2019, indicated there were "a minimum of 16 stab wounds to the upper back and neck" and blunt force trauma to his head that could indicate he was unconscious during the stabbing. The stab wounds were believed to have occurred while the victim was still alive. The victim also had multiple broken ribs and was believed to have died within minutes of the accumulated injuries.

The autopsy was performed around 8 a.m. and the time of death was estimated as 48 hours "plus change" earlier.

Deputy Austin Thompson provided a statement that Ashlock told him he had stabbed the victim during an argument at Ashlock's residence after Fryar refused to leave. Ashlock also allegedly stated he put Fryar's body in the trunk and "just drove around" until he was pulled over and "panicked trying to evade" law enforcement.