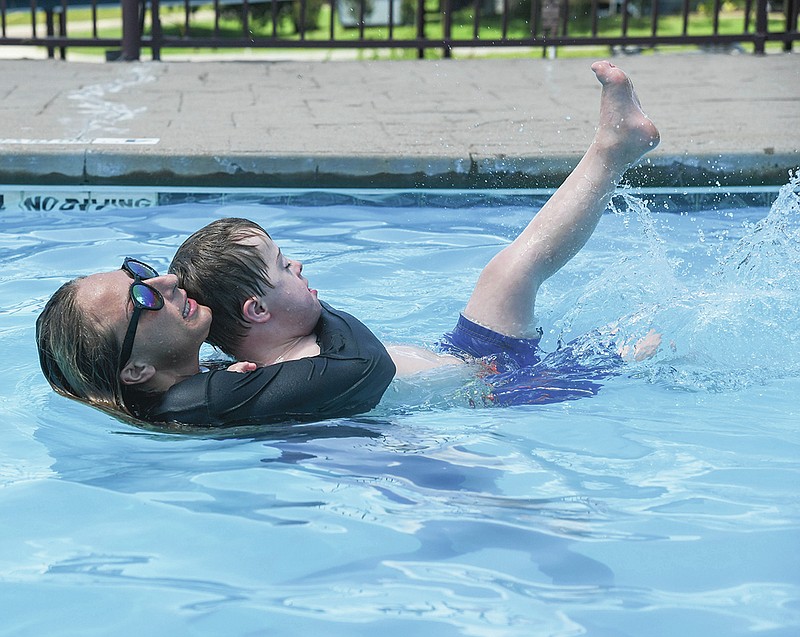 Swim instructor Samantha Porter works with Cooper Fullen, 6, of Hot Springs at the Red Carpet Inn on June 26, 2020.-Photo by Grace Brown of The Sentinel-Record

Throughout her life and career, local swim instructor Samantha Porter's faith has played a significant role in everything she does.

The importance of keeping an eye on your child while they're swimming should not get lost in the waves, as children who are ages 1 to 4 at the highest risk of drowning. Offering three 30-minute swim/water safety sessions a week during the summer months, Porter described the profession as a "very rewarding job."

How did you become involved in the profession of water safety instruction?

SP: Almost four or three years ago, I was living in Georgia. That's where I'm from. Douglasville, Carrollton area. A little outside of Atlanta. I was going to school at University of West Georgia and also working in a day care at a gym called Club Fitness. I had hurt my foot running and I wanted to stay in shape so I started swimming laps in the pool.

I would play with some of the kids I had in day care in the pool while I was swimming and the lead swim instructor started it over 25 years ago at Club Fitness. She basically recruited me because she saw how well I did with the kids and she knew I already worked for the gym. Personally taught me how to do it, certified me and everything, and that's how I started doing it there.

I did it there full time for a while until I met my husband who lives here and has lived here his whole life and two months later I moved here and this is where I've been. Right now, I do this during the summer and during the year I work at Gospel Light Christian School assisting first and second grade and teaching P.E. and coaching basketball.

What is the age range that you focus on?

SP: I've done 6-month-old to 12-year-old but I found that I work personally best with around one to 10-year-olds -- mostly because 1-year-olds when they start to get over stranger danger and aren't as clingy to mom usually, sometimes they still are. I like young kids. Those are my heart. I enjoy being with kids all day long and I think I work best with younger ones.

Can you walk us through the process of teaching a young student?

SP: What I tell parents is that I do 30-minute lessons three times a week depending on what the parent wants and the child needs. All children reach different goals at different rates which is why I do one-on-one lessons.

The child's age, capability, and attitude toward the water and myself all go into how quickly they will pick up the skill, but all kids can pick it up. I try to set goals with water safety, especially for younger kids. Rolling, floating, finding the edge, pulling yourself up, muscle memory.

Once they have those done or they're older, we reach goals such as treading, diving to the bottom, safety swims across the pool, and then their strokes.

Can you go into detail about the water skills you teach?

SP: I start with a healthy fear of the water. From the very beginning, we start by sitting on the steps with the young kids, feet in. I'll sit behind them, but I won't ever carry them in on their first lesson.

I want them to understand that the water is its own thing and if anything, I always tell them: don't reach for me. Reach for the edge, reach for a bar, a floaty. Not somebody. That's a skill that I try to hammer in their heads. Walking in safety, understanding water, healthy fear, holding on to the edge. Shimmying around the pool -- holding onto the edge and just being able to shimmy all the way around. Being able to reach for the edge, grab on, and get out is actually a thing that you wouldn't really think about doing because we have our muscles developed.

There's a lesson I go through with the kids on how to reach for the edge, grab on, and actually climb out of the pool. I tell them, one hand, two hand, chicken wing. They put their armpit on the edge, chicken wing, chicken wing, and they lift up their chest, and then they put one leg up and they're able to roll off. Not stand up because if they do stand up on the edge or they're near the edge, I'll eventually grab them and pull them in when we're comfortable with each other just to remind them: 'Hey, you can't do this. It's a healthy fear. When you get near the edge, roll to safety. Roll away from the edge first and then get up. Don't stand near the edge unless you're jumping to me.'

I tell kids repeatedly that when you're flat, you float. When you sit, you sink. That's one of the rhymes I use and it's true. When kids jump in the water, they instantly want to sit down and drop their feet, drop their hips and that's when they sink down. When they stay flat and they learn this, any adult can do it if they can keep their body flat on the water, they'll float. The skill is to figure out how to roll onto your back to where you're floating and able to breathe at the same time. It's just something that comes with a lot of practice and criticism.

The safety swim is where a kid starts at one end of the pool and they're swimming with their face in the water however many strokes they can and when they get tired and can't kick anymore and they stop, relax, catch their breath, figure out where they're at. Then, they roll back to their belly, put their face in and go as far as they can.

How long do you usually stay with one student?

SP: That's a question I get a lot from parents and it totally depends on them and what they want. I have had parents that have come that have learned the skill with their young kids to get to the edge or roll to the back and the safety level is there and that's where they stop and they feel like they can take it from there.

I've had parents with young kids that learn the safety skills and then learn to swim and then want to learn all of their strokes and stay involved to come back next summer because they love it and for the exercise. They just enjoy it.

Why do you feel it's important to start teaching kids that young?

SP: Especially now in our culture, we have a lot of "police moms" and our answer to it is to put floaties on the kids and puddle jumpers and all those fun things which are good and some of them are safe and keep the kids up.

A lot of them have proved to not be safe. The ones that do keep the kids up just give them a false sense of security in the water and if parents don't teach that safe fear, that respectful fear of the water it can be a big problem in younger kids who don't understand that one too many steps and once they're underwater -- there's no helping them unless you see them.

You rarely fear it especially with kids that age who don't know how to kick, haven't developed that muscle memory to automatically roll to their back.

Why do you personally teach water safety for young children and children with special needs?

SP: It's a calling and it's a gift that God has given me. It's my drive and my true love is children.

I've always done it for work as long as I can remember. I knew at a young age that I wanted to be a teacher and I've just been gifted athletically by God and it developed through the years into this love of swimming. Now being able to teach that, not only that, but then also coaching basketball with young kids in pee-wee and I started coaching baseball at this school.

It's just a way that God has given me -- to not only impart knowledge and skills to young kids, but also encourage them and develop their character as individuals.